Valeant Pharmaceuticals, Akorn Inc., and Depomed shares have struggled in the past, but one may be a better buy than the others.

A string of setbacks have plagued the company since it was revealed that management acquired two heart disease drugs only to jack up their cost by more than fivefold and twofold, respectively, last year.

In October, Valeant had to abandon its all too cozy relationship with a specialty pharmacy that was juicing up sales, and then an internal audit discovered accounting mishaps that are delaying the filing of its full-year financials with regulators. Recently, management added to its hit list by significantly cutting its sales and profit outlook. And let's not forget that Valeant's CEO is being shown the door, too.

Amid all that disastrous news, it's little wonder that Valeant's shares have fallen 80% since last summer. 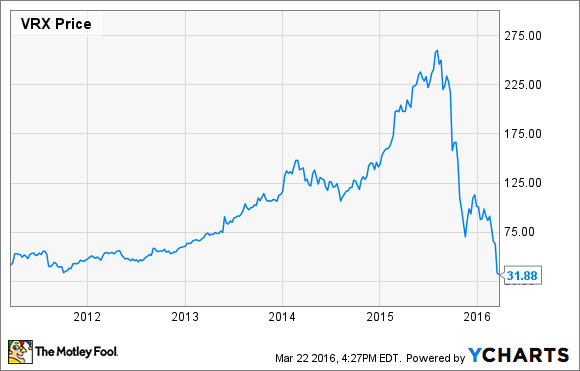 But does that tumble make Valeant Pharmaceuticals a bargain-bin buy? Maybe. But a lot of things need to happen for that to be true.

Certainly, a turnaround could happen. After all, Valeant has valuable brands (Bausch & Lomb) and products (Jublia), and although it recently cut its sales guidance to a range of $11 billion to $11.2 billion, it also forecast that its revenue will grow to between $11.6 billion and $11.8 billion in the four months spanning Q2 2016 through Q1 2017.

Of course, whether management can hit its revenue targets and overcome its stumbles depends a lot on who gets named to run the company from here, and because that's a big question mark, it may be too soon for anyone other than the most risk-tolerant investor to pick up shares.

No. 2: Akorn, Inc. (AKRX)
A $2 billion market cap means that Akorn is a lot smaller than Valeant, but the two companies do share one glaring similarity: They're both struggling with accounting woes.

Akorn, a generic-drug maker, has been knee-deep in a review of its 2014 results for a year, and while that review has found errors that will cause the company to restate $35 million in revenue, the end of its accounting nightmare may be in sight.

Akorn's troubles stem from what it characterizes as "material weaknesses in its accounting operations" in 2014.

Material weaknesses are never a good thing, but given that the company did two big acquisitions that year, the admission was especially worrisome, and as a result, investors went for the exits. 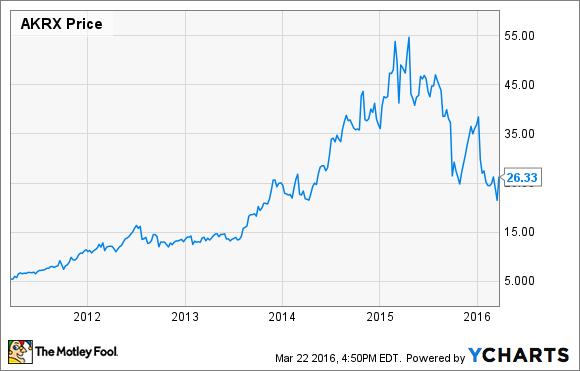 Fast-forward to today, however, and Akorn and its auditors at BDO have made enough progress that management thinks it will be able to file its financials with the SEC by May 10. If Akorn meets that goal, then investors will be able to shift their focus from accounting "shoes that could drop" to the company's improved balance sheet and its future growth opportunities.

Last year, a tight lid on spending allowed the company to increase its cash position from $70.7 million exiting 2014 to $346 million exiting 2015, and thanks to that extra financial flexibility, management paid down $200 million in debt this quarter, a move that improved its leverage ratio to 1.6. Management believes that its cash flow will allow it to get its leverage ratio down to 1 by the end of this year, and if so, the company's finances should be on solid enough footing to support the launch of newly approved generic drugs in the future.

Given that an aging America means that generic-drug demand offers the company natural sales tailwinds, and that the company's accounting debacle could soon be resolved, this stock might be worth considering.

No. 3: Depomed (ASRT 1.00%)
Unlike Valeant Pharmaceuticals and Akorn, Depomed's accountants aren't on the hot seat. However, because Depomed has embraced a Valeant-like growth through acquisition strategy, its shares have fallen in sympathy with Valeant. 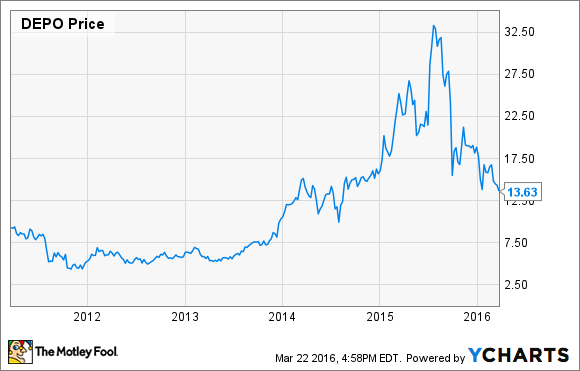 However, comparing Depomed to Valeant may not be entirely fair. Why? Because Depomed's pricing strategy is to bring its acquired drugs only up to levels that make them competitive with the market share leader, and that's far from price gouging.

For example, Depomed's biggest seller is Nucynta, a painkilling drug it acquired from Johnson & Johnson (JNJ 0.06%) last year. Despite an arguably better safety profile than oxycodone, the market-leading painkiller, Nucynta sales were less than $200 million in 2014.

Yes, Depomed increased Nucynta's price after it acquired it, but it only increased it to $18.44 per day, which matches up with Oxycodone and remains cheaper than Opana, another painkiller than costs $20 per day. Depomed also made a big investment in Nucynta. tripling its sales force.

That strategy is already paying off for investors.

Nucynta's sales hit $68 million in Q4, up 55% from the year before, and importantly, rising use of Nuncynta was a big reason behind the drug's sales growth. In December, Nucynta's prescription volume grew 20.7% from a year ago.

Because Nucynta's sales trajectory has management predicting revenue of at least $485 million this year, up from $342 million last year, and industry watchers are modeling for EPS of $1.23 in 2016 and $1.56 in 2017, this may be the biggest bargain bin buy of the three. At current prices, Depomed's forward P/E ratio is below 9, and while that may not be as cheap as Valeant, it's still a bargain, especially when you consider that Depomed's shares don't come with Valeant-sized baggage.

Todd Campbell owns shares of DepoMed,. Todd owns E.B. Capital Markets, LLC. E.B. Capital's clients may have positions in the companies mentioned. The Motley Fool owns shares of and recommends Johnson & Johnson and Valeant Pharmaceuticals. We Fools may not all hold the same opinions, but we all believe that considering a diverse range of insights makes us better investors. The Motley Fool has a disclosure policy.