Stocks fell for a second straight trading session on Wednesday, following seven consecutive up days. By the closing bell, the Dow Jones Industrial Average (DJINDICES:^DJI) had lost 80 points, or 0.4% and the S&P 500 (SNPINDEX:^GSPC) shed 13 points, or 0.6%, to slip back into negative territory on the year. 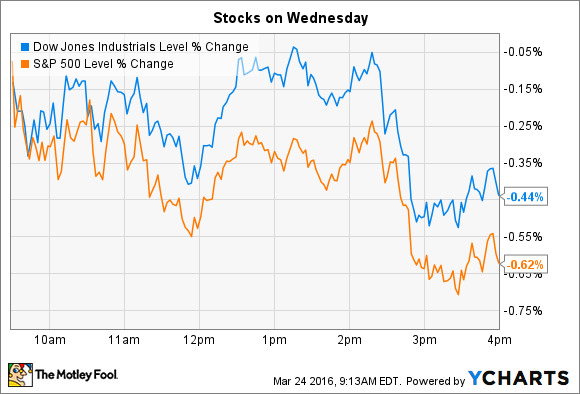 Nike posted the biggest percentage-point drop on the Dow, falling 4% in the wake of the footwear giant's fiscal third-quarter earnings report. Profits surged 22% higher in Q3 to $0.55 per share, which beat consensus estimates by a wide margin. Revenue growth, at 8%, trailed the 9% that Wall Street analysts were forecasting. That small miss aside, the retailer enjoyed a strong quarter as the Nike brand rose 15% (after exchange rate adjustments) thanks to double-digit growth across its geographic markets. The direct-to-consumer business improved by 29% as online sales spiked higher. "In the third quarter, Nike delivered robust and balanced growth across our expansive, powerful portfolio," CEO Mark Parker said in a press release.

The company's profitability held steady at 46% of sales rather than post a slight decline, as management predicted last quarter. Gross margin benefited from higher prices and from growth in the profitable direct-to-consumer business, Nike explained.

Futures orders, which can be a good indication of demand, rose 12%, or just below the prior quarter's 15% rise. Yet Parker and his team left their full-year sales and profit outlook in place. They also said that while fiscal 2017 planning is still in the works, Nike should see reported revenue growth at a "high-single digit rate." Considering the stock was at an all-time high heading into this report, Wall Street was holding out for a more aggressive outlook from the sports apparel titan.

Five Below's double-digit growth target
After initially diving in response to surprisingly strong quarterly results, Five Below's stock jumped 7% higher after it revealed that revenue over the holiday-season period soared 24% thanks to a fast-expanding store base and a healthy 4% improvement in comparable-store sales. The discount retailer's $0.77 per share of earnings edged past the guidance that management issued in early January as well.

"Our successful fourth quarter and full year 2015, particularly the all-important holiday season, was the result of strong execution against the key initiatives we prioritized in 2015," CEO Joel Anderson said in a press release.

Five Below maintained its profitability over the intensely competitive holiday shopping season: Gross margin was unchanged at 40% of sales. That success helped the retailer book a 19% profit jump for the full year, to $1.06 per share.

Looking ahead, the company forecast accelerating comps growth next quarter as the coming fiscal year pushes Five Below into over $1 billion of annual sales. Longer-term, "we believe we will deliver against our average annual goal of 20% top-line growth," Anderson said, "along with greater than 20% bottom-line growth through 2020." That's an aggressive target that will require the company to stay ahead of fast-changing fashion trends, but these results suggest its achievable.