Between winning construction bids in Mexico, expanding its renewable power platform, and bringing its LNG facilities on line, Sempra Energy has plenty of growth in the pipeline to get shares to rise over the next few years.

It would seem that not even a major environmental crisis can derail Sempra Energy's (SRE 2.19%) stock price. Even after the company was dealing with a gas leak several months long that emitted what is believed to be the nation's largest natural gas leak and relocated several hundred residents, Sempra's stock has barely missed a beat. 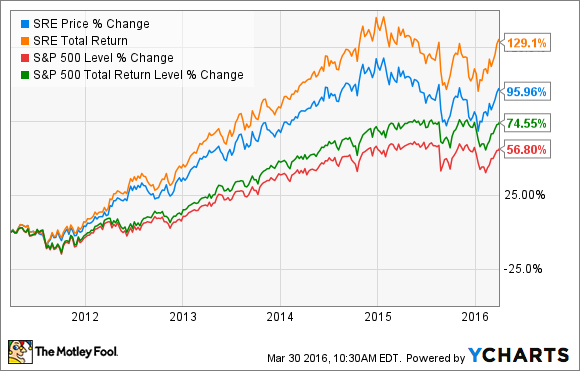 While there is likely some consequences down the road from this leak that could end up putting a dent in Sempra's business, there are still several other things going on at the company that could help keep the company's stock chugging along despite the potential effects of the Porter Ranch fiasco. Here are three things that Sempra Energy is working on that could get its stock going.

Continued bid wins in Mexico
One place that Sempra is placing a lot of bets on over the next several years is just south of the border. In an effort to encourage growth and development of the nation's energy sector, the Mexican government has allowed companies other than state oil company PEMEX participate in the oil and gas industry and has doing open bids for energy infrastructure projects ranging from oil and gas pipelines to electric power generation and transmission. In 2016 alone, Mexico's Federal Electricity Commission is expected to award bids for $9.8 billion in various energy projects across the country.

Sempra, through its Mexican subsidiary IEnova, is expected to be a major competitor for the bids on these projects. The company expects to bid on more than $11 billion in just natural gas pipeline projects over the next couple of years. 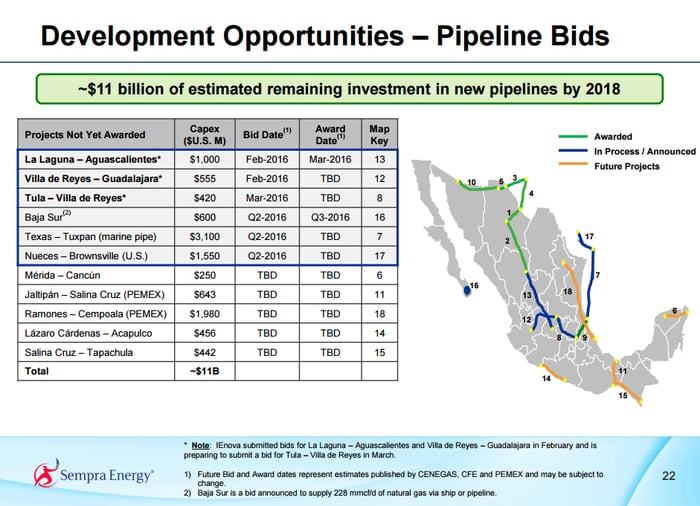 What is most spectacular about these growth projects is that the company didn't include them in its 2015-2019 growth plan since being awarded bifs. That plan was already planing for EPS growth of 50% over that time frame, so if IEnova can continue to win bids on these projects and grow Sempra's Mexico footprint quickly, it could be an added bonus to the bottom line that could lead to some impressive share price increases.

Big bump in renewable portfolio
While so many other utility companies have been looking to boost their regulated businesses through acquisitions, Sempra seems to be content growing its unregulated and wholesale generation platforms. The difference between them, though, is that Sempra is making a much larger push with renewable projects. 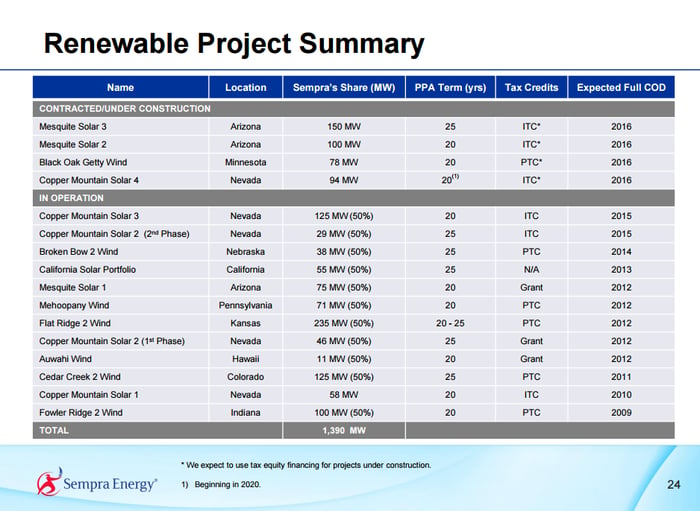 One of the added benefits of investing in renewable energy projects as a form of wholesale generation is that companies can contract the production from these projects for several years, which helps to reduce pricing volatility that can happen with so many other wholesale power plants. On top of the close to 1,400 MW that are in operation or under construction, the company has identified another 730 MW of new capacity that could be added to existing solar and wind sites over the next four years.

As other utilities will need the renewable energy credits to meet the obligations of the clean power plan, don't be surprised if Sempra steps up and expands its renewable platform even more and reap the benefits.

Cameron LNG coming on line... and beyond
This one is by far the largest catalyst for Sempra in the future because the company is making such a large bet here. Cameron LNG is currently approved to export up to 12 million tons per year of LNG, and expects to have all three liquifaction trains up and running by November of 2018. With a large commercial agreements already in place with its equity partners, the company already has a large portion of the facility under contract that will ensure steady cash flows once up and running. According to the company's base plan, Cameron LNG is expected to generate an additional $550 million-$600 million in EBITDA annually once fully operational in 2019.

That alone could be enough to significantly grow the company's bottom line over the next couple of years, but the company is looking beyond this initial LNG facility to become a much larger player in the space. It already has plans in place to expand the Cameron LNG facility by another two liquefaction trains, is currently in the permitting and design process of coverting two other regasification terminals -- Energia Costa Azul in Baja California, Mexico, and Port Arthur, Texas -- into liquefaction terminals as well. The sheer growth from the initial Cameron LNG project suggests that, if all three of these projects were to be completed over the next decade, Sempra would be looking at a major boost of earnings that would send its share price surging.

What a Fool believes
Anyone invested in Sempra Energy right now is likely wondering what sort of longer-term impact the Porter Ranch debacle will cause. While it says that it has more able insurance coverage that should help to mitigate some of the current costs, any company that has been involved in major hydrocarbon leaks or spills in recent years has not fared well in court.

It's possible that some of these major projects could be tabled if the costs of the leak start to take a toll on cash flows, but we can't know for certain until there is a definitive conclusion to the whole ordeal. In the meantime, Sempra has a pretty large quiver of development projects that should lead to strong earnings and dividend growth. As long as investors don't fear the repercussions of Porter Ranch -- and there's little indication they do -- then all three should send shares of Sempra soaring.