Indexes closed out a volatile first-quarter with solid gains.

After a brutal start to the year, a six-week rally has allowed both indexes to finish the first quarter in positive territory: 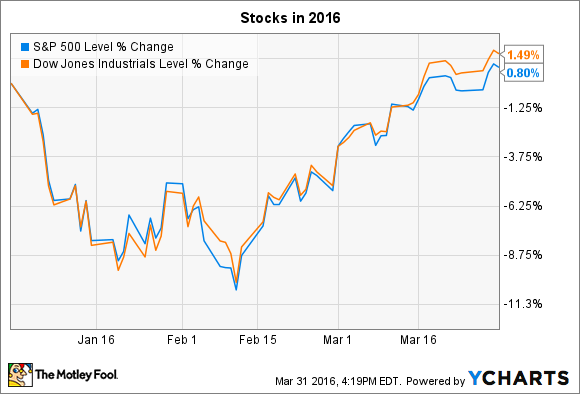 Stocks making notable moves today included Tesla (TSLA), which is set to unveil its new entry-level car, and Medivation (MDVN), which reportedly is being courted as a buyout target.

Tesla's Model 3 day
After spiking by as much as 5%, Tesla shares settled to a 1% uptick on the day the electric carmaker began taking reservations for its new mass-market vehicle, the Model 3. The car isn't slated to go into production until late next year, but lines are already forming at Tesla showrooms around the world where people can mark their place in the queue (with a $1,000 deposit) before reservations start being accepted online at 11:30 p.m. EDT, Thursday .

CEO Elon Musk plans to show off a working prototype of the Model 3 at that time, which should begin answering some of the many questions that investors and auto enthusiasts have about the car. For now, we know the price should be around $35,000, compared to over $100,000 for the Model S, and the battery should provide a range of about 200 miles on a single charge. That sharply lower price tag is a key reason why Musk believes his company can eventually achieve deliveries of 500,000 cars per year (at a significant profit) by expanding out of the luxury market -- beginning with this vehicle.

In addition, investors are due to receive a key update on the popularity of Tesla's current fleet when the company announces Q1 delivery figures next week. In February, executives forecast 16,000 total vehicle sales for the quarter, which would represent 60% growth, year over year. This announcement will be closely watched since it is the first one to include significant sales of the Model X .

Medivation's buyout rumors
Medivation spiked 23% higher on heavy trading volume after Bloomberg reported that the biopharmaceutical company has been approached by several potential buyers. Executives have apparently hired financial advisors in response to the interest, but Medivation does not currently plan to sell itself, the report stated .

Medivation's popular cancer drug, Xtandi, along with its pipeline of promising medications now advancing through clinical trials, could make the company an attractive acquisition target. However, there aren't many large rivals that could afford the purchase. Medivation was valued at $6 billion before the merger rumors broke on Thursday morning.

Buyout rumors aren't a good basis for an investment thesis, which is why shareholders should try to stay focused on the business despite these stock price swings. Medivation has provided plenty of good news in that area lately, as revenue spiked higher by 37% last quarter thanks to a near doubling of Xtandi capsule sales. Q4 net income rose even faster, soaring 164% to reach $50 million. "We are delighted with our substantial progress in 2015 on many fronts," CEO David Hung said in the earnings press release. The company also predicted that it hopes to achieve more milestones this year, particularly in advancing drugs in its portfolio through the trial process.