These states had the highest audits per capita in 2015, so why did these states' taxpayers attract attention?

The word "audit" is one of the most dreaded words in the English language for many people. While an audit isn't necessarily a terrible thing -- especially if the information on your tax return is honest and accurate -- it is certainly inconvenient to deal with. The most likely states for an audit are ...
TaxAudit.com recently looked at data from 1.5 million Audit Defense users whose 2014 tax returns ended up getting audited in 2015. From this information, there are some states where taxpayers are more likely to face an IRS audit, and others where an audit of their state return is more likely.

It was discovered that the top 10 states for IRS (federal) tax audits are: 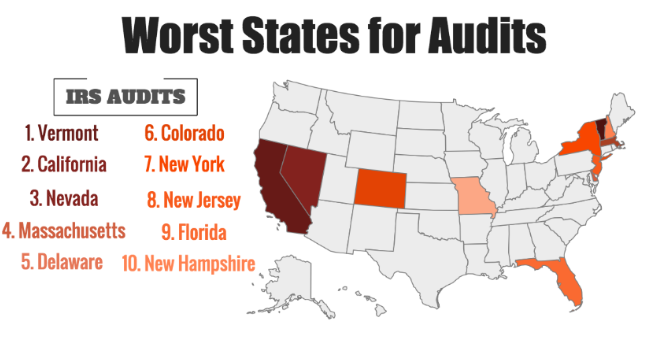 And, the five states with the highest likelihood of a state tax audit are:

Why are more taxpayers audited in these states?
First of all, I want to point out that correlation does not imply causation when it comes to this data. In other words, just because a higher percentage of tax returns in Vermont and California are audited by the IRS doesn't mean these returns are selected because they live there. However, there could be some deeper reasons for the states on this list.

Income is the major factor that we can see clearly in this list. It's a known fact that taxpayers with higher incomes get audited more frequently, and it's easy to understand why. After all, if the IRS audits a taxpayer with a $1,000,000 income and another with a $50,000 income, which one is more likely to produce the higher added revenue for the IRS? I caught up with Dave DuVal, VP of consumer advocacy at TaxAudit.com, to shed some more light on the subject.

When asked why he robbed banks, a famous bank robber once said, "Because that's where the money is." When you ask why the IRS audits rich people, the answer is exactly the same: because that's where the money is. In 2014, as an example, the IRS audited more than 16% of income tax returns that reported more than $10 million in income. In general, more money means more audits, but even taxpayers with less than $25,000 get audited, and this is often due to refundable credits.

As far as the state audit data is concerned, it's tougher to identify reasons since these are not apples-to-apples comparisons. In other words, each state has its own revenue department with its own level of resources and priorities. For example, if one state's tax agency has twice the employees of another on a proportion of its population, it makes sense that it could handle more audits.

However, some states have possible reasons for a higher audit rate. For example, DuVal says that moving expenses are one potential reason Hawaii's audit rate is so high. The IRS allows taxpayers to write off expenses incurred during a work-related move, and moving to Hawaii is especially expensive.

However, it's important to know the actual factors that can make your return stand out. As we mentioned already, simply having a high income increases your chances of an audit. In addition, there are a few other things that can set of bells at the IRS, including but not limited to:

As I've written before, an audit doesn't necessarily have to be a scary thing if you know what to expect and are prepared for it. So take the state data with a grain of salt, and instead focus on the underlying reasons why you could be audited. And above all, be prepared.