After gaining 4% during the trading day on the company's rapidly growing reservation-count for its just-announced Model 3, shares of electric-car maker Tesla Motors (TSLA 2.51%) slipped 3%, at the time of this writing, in after-hours trading on Monday after the company's reported first-quarter vehicle deliveries. While deliveries were up a substantial 48% from the year-ago quarter, they were down 15% sequentially and below the company's guidance for the quarter. 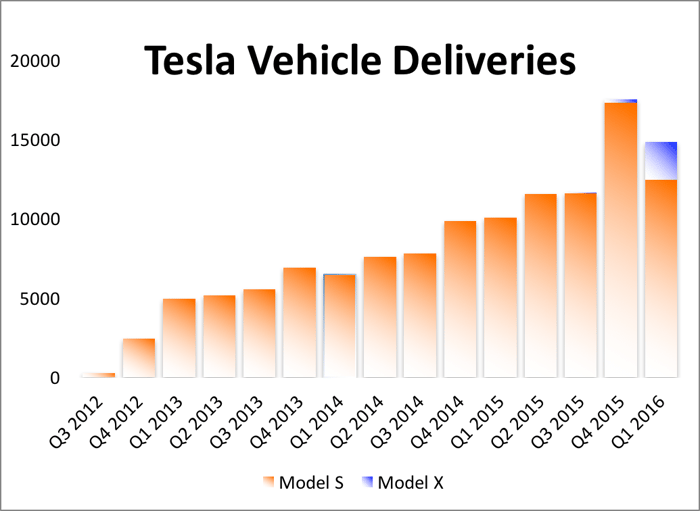 In the press release announcing first-quarter vehicle sales, Tesla offered a detailed explanation for the company's underperformance compared to its own guidance:

"The Q1 delivery count was affected by severe Model X supplier parts shortages in January and February that lasted much longer than initially expected," Tesla explained.

The root causes of the parts shortages were: Tesla's hubris in adding far too much new technology to the Model X in version 1, insufficient supplier capability validation, and Tesla not having broad enough internal capability to manufacture the parts in-house. The parts in question were only half a dozen out of more than 8,000 unique parts, nonetheless missing even one part means a car cannot be delivered.

For investors, the company's inability to ramp Model X production will likely spark more skepticism toward the company's upcoming Model 3 launch. With nearly 300,000 deposit-backed reservations for the vehicle within a few days of its launch, problems like this could compound setbacks at the company's planned higher volume of production.

By the end of the quarter, Tesla had resolved these issues, the company asserted. But the resolution didn't come soon enough.

Once these issues were resolved, production and delivery rates improved dramatically. By the last full week of March, the build rate rose to 750 Model X vehicles per week, however many of these vehicles were built too late to be delivered to their owners before end of quarter.

Foreseeing the potential investor worries about whether or not these mistakes will be avoided with the Model X launch, the company addressed the concern in the press release:

"Tesla is addressing all three root causes to ensure that these mistakes are not repeated with the Model 3 launch," Tesla said.

Huge growth needed the rest of the year
Despite missing its guidance for Q1, management believes the company can still deliver 80,000 to 90,000 vehicles this year -- a range that represents about 58% to 78% year-over-year growth compared to deliveries in 2015.

Tesla is undoubtedly looking to Model X to drive much of the growth this year. With over 30,000 reservations for the vehicle reported by the company earlier this year, the company still has a significant backlog of demand for the September-launched SUV. Tesla has only made about 2,600 deliveries since the vehicle's launch.