American Water Works has a few levers to pull to ensure it has a bright future.

A bit of background
Before getting to the exciting stuff, you need to understand one important thing about American Water Works -- it's a utility. While electric utilities get all the headlines, water is another one of those necessities that gets granted a monopoly in exchange for heavy regulation, including allowing the government to set the rates American Water Works can charge.

Generally speaking, the way a utility gets to charge more money is by spending money to upgrade or maintain its services. Since water is truly a basic necessity of life, regulators are usually pretty reasonable when it comes to rate increases for spending. And this is where it gets interesting. 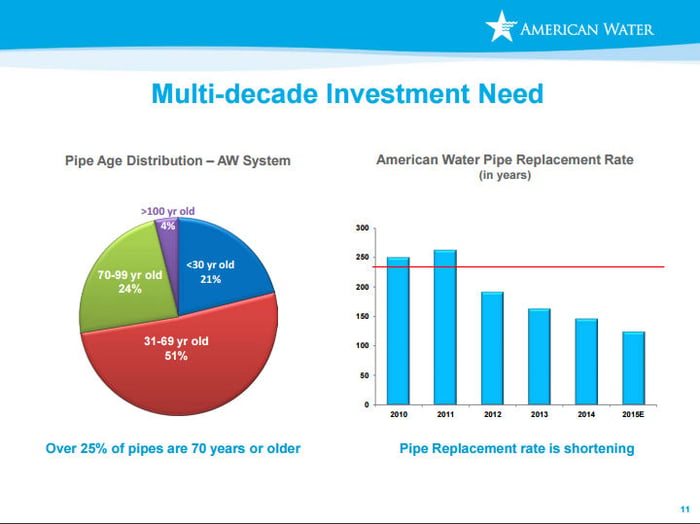 Here's a frightening fact: By 2020, nearly 45% of the water pipes in this country will be classified as poor, very poor, or life elapsed (yikes!). Would you like to get your drinking water through pipes that have outlived their useful lives? That's why $1 trillion is expected to be spent on the United States' aging water system over the next 20 years.

So American Water Works is a utility that owns aging water pipes in need of heavy spending on upgrades. The company calls this a "multi-decade investment need." Investors might call it built-in growth prospects. Capital spending on its core assets is expected to provide 4% to 6% earnings growth for the company over the next four years or so. But that's just the core -- it has other opportunities on top of that which should bring growth into the 7% to 10% range. 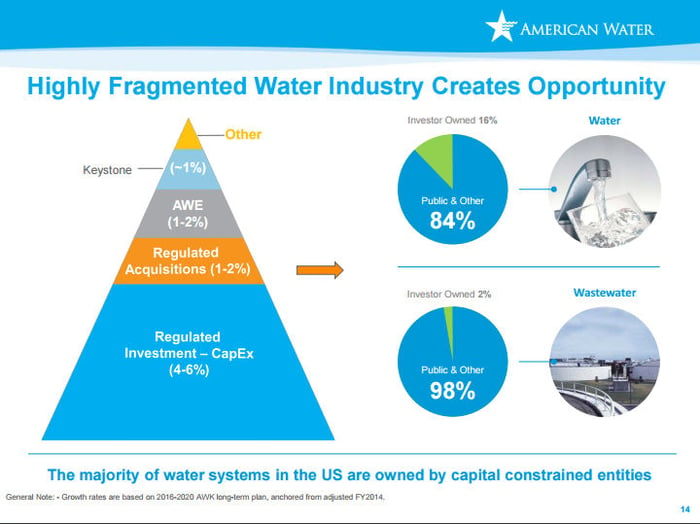 More here than meets the eye
But wait, there's more: $1 trillion is a lot money, and a utility can tap the capital markets to raise the cash because investors understand the investment/rate increase dynamic. But only about 15% of U.S. water systems are owned by public companies. The number is even lower when it comes to wastewater systems: 2%.

Now ask yourself how a cash-strapped municipality might come up with the funds to fix its aging water infrastructure. Selling stock isn't an option, and bonds only make debt-laden government balance sheets worse. So, many cities and towns are likely to sell their systems to a company like American Water Works.

That kills two birds with one stone. First, it raises revenue that can be used to pad a government's budget, and two, it saves the town or city from having to shell out big bucks to keep the water flowing. This is why American Water Works expects regulated acquisitions to add between 1% and 2% to earnings growth each year through 2020. It's pretty close to a win/win for everyone involved.

Big picture says swim
Clearly, there are other things you'll want to keep an eye on at American Water Works. For example, it's been trying to do more with the water needs of oil and gas drillers. That business might end up being less desirable than originally expected. It's also building businesses that provide services to the military and homeowners, among others. But these things are the icing on the cake.

If you do the simple addition, American Water Works will achieve the bulk of its earnings growth from just the regulated business and regulated acquisitions. Taken together, these two should provide 5% to 8% growth. At the high end, that's already within the 7% to 9% target.

Clearly, heavy spending requires a strong balance sheet and ready access to the capital markets. So those are issues to monitor. But when all is said and done, the foundation of American Water Works' future is the regulated water business, which is in dire need of spending. That spending should lead to regular rate increases and plenty of opportunities to acquire new water and wastewater systems from cash-strapped municipalities. It sure looks like American Water Works has what it takes to swim.