Please ensure Javascript is enabled for purposes of website accessibility
Log In Help Join The Motley Fool
Free Article Join Over 1 Million Premium Members And Get More In-Depth Stock Guidance and Research
By Tyler Crowe - Apr 5, 2016 at 10:15AM

Even though all signs point to a bad month, shares of Nabors went in the other direction.

What: Despite news that would send other companies' stocks reeling, shares of Nabors Industries (NBR 4.91%) posted a 28% increase in March thanks to a couple analyst upgrades and a little love from crude oil prices.

So what: Pretty much any time that a company has received a credit downgrade, that company is likely to see a pretty drastic price decline. This month, though, Nabors stock was able to withstand a credit downgrade from Moody's without it taking a huge toll on the company's stock. What is even more absurd about Nabors climb last month is that the overall operating environment for rig companies continued to deteriorate. According to the Baker Hughes rig count, total active rigs in the US slipped to its lowest level since Baker Hughes started keeping track of them back in the 60s. 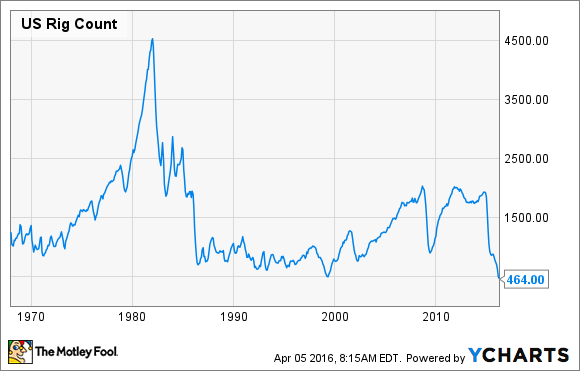 What this goes to show is that Nabors stock moved with oil prices even though the fundamentals of the company continued to decline in the month. Sure, higher oil prices could incentivize a producer or two to add a rig, but we have yet to see any increase in activity.

Now what: With utilization of Nabors fleet running as low as it has in recent quarters, the company is stuck in the rut. It may be one of the larger land rig owners and has one of the better new generation rigs with its PACE rigs that have garnered interest from producers, but the company isn't generating enough cash to cover its investments in the fleet. Furthermore, it has a debt level that runs on the high side of its peer group, and the recent credit downgrade suggests that it will get harder to make debt fueled investments.

Ultimately, this past month's stock pop seems like a fluke that could easily go in the other direction just as fast, especially since we haven't seen any improvement in the actual drivers of Nabors' business. For investors, it's probably best to stay away from this one. There are other land rig companies out there that have better operating track records and less financial constraints that would make a better investment today.