Please ensure Javascript is enabled for purposes of website accessibility
Log In Help Join The Motley Fool
Free Article Join Over 1 Million Premium Members And Get More In-Depth Stock Guidance and Research
By Matthew DiLallo - Apr 6, 2016 at 9:33AM

Earlier this week, Freeport-McMoRan (FCX 4.35%) announced a new organizational structure for its oil and gas division. It was restructured as an operating division within the company, instead of its own separate entity, resulting in the entire executive management team getting axed, including longtime CEO Jim Flores as well as its CFO, COO, and general counsel. While the move was made to cut costs, it also signals the fact that the company not only realizes the initial acquisition was a big mistake, but that it has become an albatross that it simply won't be able to get rid of.

A trip down memory lane
When Freeport-McMoRan announced the acquisitions of its oil and gas businesses in Dec. 2012, it thought it would be a game changer. Former Chairman Jim Bob Moffitt commented on the conference call announcing the deal saying that it would take the company from "being a mid-sized player to being a major player in both the resource business and in the mining business." However, it also saddled it with a big pile of debt, which has weighed it down ever since oil and copper prices plunged: 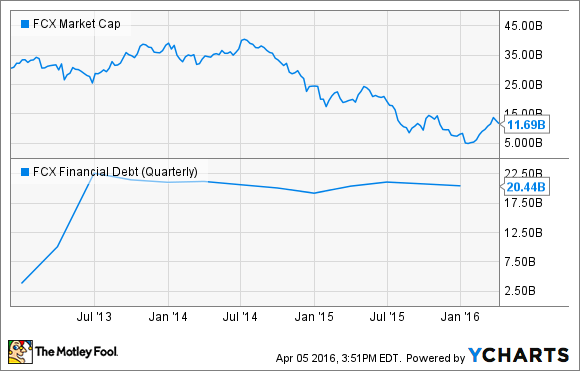 As such, in hindsight, the deal was a bad idea, both in terms of its timing and more importantly in how it was funded. At the time the deal was struck, however, those were the very reasons cited as the compelling rationale behind the transaction. In terms of timing, CEO Richard Adkerson noted on the call that the company's board was "really positive about the global outlook for commodities," which is why it wanted to bolster its exposure to the commodities market. Moreover, he noted that at that time the company was in "a situation of where we have attractive financing markets. And we've been looking for ways to take advantage of those financing markets to produce returns for shareholders." In other words, debt was so cheap that it had been searching high and low for a way to take advantage of that cheap debt.

Righting a wrong
Unfortunately, Freeport-McMoRan did not see the collapse in commodity prices coming and really got burned by this deal. It has now spent the better part of the past year trying to right this wrong. First, it sought outside capital to fund the widening gap between its cash flow and its oil and gas capex. After not finding any takers it then decided to it would either spin off or sell part or all of the unit. To date, however, not one of these avenues have proven fruitful and now the company appears to have pretty much given up on the idea of jettisoning any part of the business.

Instead, it will now reabsorb the unit as an operating division and look for additional ways to cut costs in an effort to stay afloat. As such, the oil and gas division no longer requires its own C-Suite executives, which is why the company is cleaning house and letting its top four oil and gas executives go.

For Flores, in particular, this has to be a bitter ending because he founded Plains Exploration and Production in 2002, which is one of the two companies Freeport-McMoRan acquired to build its oil and gas subsidiary. However, his big bets on the Gulf of Mexico as well as natural gas have failed to pay off as expected due in large part to the fact that oil and gas prices didn't cooperate. Still, with the transaction leading to the undoing of the company, and no alternatives options to be found, he and his team are being shown the door to save some money while it decides its next steps.

Investor takeaway
Commodity prices and debt are a dangerous combination. That has certainly been the case at Freeport-McMoRan, which is struggling mightily under the weight of debt after its bullish outlook on commodities didn't come to pass. Because of that, it can no longer afford to keep the top management level of its oil and gas business, with those executives paying the price for their role in digging the company into its deep hole.