Please ensure Javascript is enabled for purposes of website accessibility
Log In Help Join The Motley Fool
Free Article Join Over 1 Million Premium Members And Get More In-Depth Stock Guidance and Research
By Jeremy Bowman - Apr 8, 2016 at 8:00AM

The better-burger chain headed lower on a disappointing outlook for 2016.

What: Shares of The Habit Restaurants (HABT) dipped 10% last month, according to data from S&P Global Market Intelligence as the better-burger chain got hit by an underwhelming earnings report. 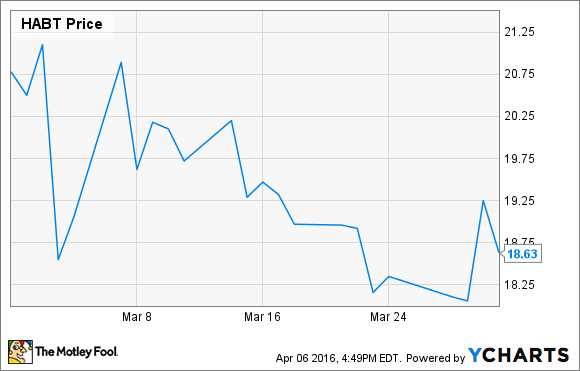 So what: The stock fell sharply following its fourth-quarter earnings report, shedding 12% in a single session, then gained it back before sliding for the duration of the month.

On the surface, Habit had a decent quarter, with a per-share profit of $0.05, a penny better than expectations, and revenue increased 25% to $60.6 million, matching estimates. However, the market was turned off by a weaker-than-expected outlook as the fast-casual chain sees 2016 revenue of $286 to $290 million, short of the consensus at $292.3 million.

Now what: Habit's quarter was essentially in line with expectations as it posted its 12th year of rising comparable sales. However, with its P/E ratio close to 100, investors seem to be expecting more. For the current year, Habit is eyeing 25% top-line growth along with a 3% increase in comparable sales. A year ago, comps were in the double digits following a 2014 report by Consumer Reports that ranked Habit's burger as the best in the country, but 3% is probably a more reasonable expectation going forward.

After recovering, the stock fell in part because rival Shake Shack also issued a disappointing outlook for 2016. As both stocks are highly valued and occupy the same space in the fast-food industry, they tend to trade in tandem.

Habit plans to open 30 to 32 company-owned restaurant this year, on top of the 142 it currently has. With a goal of 2,000 restaurants nationwide, Habit stock should eventually bounce back as long as the company can maintain its record of steady comparable-sales growth and move closer to that goal.