Please ensure Javascript is enabled for purposes of website accessibility
Log In Help Join The Motley Fool
Free Article Join Over 1 Million Premium Members And Get More In-Depth Stock Guidance and Research
By Matthew DiLallo - Apr 26, 2016 at 10:39AM

The diversified energy company is sitting on a net cash position.

The worsening of the energy market downturn over the past year has made one thing abundantly clear: Debt can be the undoing of an energy company. That's clear after countless energy producers have been forced to slash spending and sell assets just to stay afloat. Debt, however, isn't a problem for CVR Energy (CVI 5.21%) because it actually ended last year sitting on a net cash position. Given the importance of having cash right now, it is the one number investors need to know because it gives the company, and its two publicly traded subsidiaries CVR Refining (CVRR) and CVR Partners (UAN 4.20%), ample financial flexibility during the downturn.

CVR Energy's capital structure
CVR Energy is a bit more complex than the average company because it's the holding company for two publicly traded partnerships. Currently, it serves as the general partner and owns 34% of the common units of CVR Partners while owning 66% of CVR Refining's common units. Because of these large ownership stakes, it consolidates the financials of both companies into its financials. That leaves it with a consolidated balance sheet that looks like this: 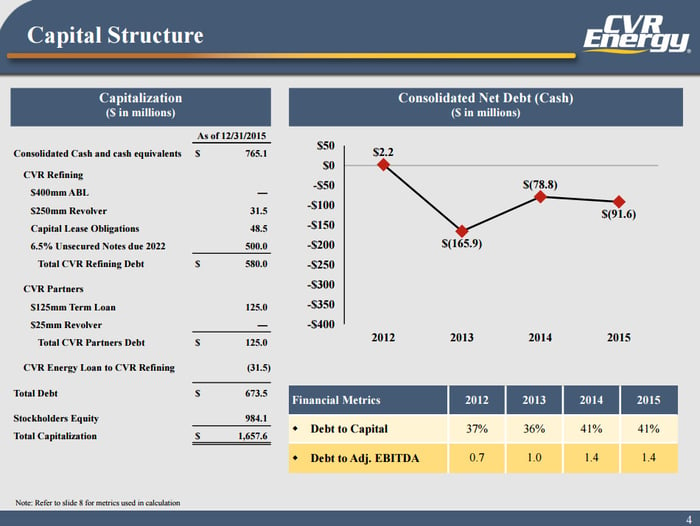 The key number I want to draw your attention to is that cash position. As that slide shows, at the end of last year the three companies had combined cash and equivalents totaling $765.1 million against just $673.5 million in total debt. That left the CVR Energy family with a net cash position of $91.6 million, which is a big competitive advantage these days. Not only does it have the financial flexibility to ride out the current storm in the energy market, but the financial capacity to take advantage of opportunities that are arising due to the downturn.

Why cash is king
Speaking of capturing opportunities, the company recently did just that with CVR Partners closing the acquisition of Rentech Nitrogen Partners in early April. It was a transaction the company was able to make because it had the financial flexibility and balance sheet capacity to not only offer a cash portion to incentivize sellers to agree to the deal, but it could also assume Rentech's outstanding debt without compromising its own balance sheet strength.

While that transaction will likely shift the consolidated CVR Energy away from a net cash position, the company still retains ample cash to both support itself during the downturn as well as pursue additional growth opportunities. CVR Partners in particular sees additional opportunities on the horizon with it noting that part of the strategic rationale behind the deal for Rentech was to use the larger scale, stronger balance sheet, and increased liquidity in the capital markets to "be capable of pursuing significantly larger and more meaningful growth opportunities as the industry consolidates." In other words, this wasn't CVR Partners last deal.

Investor takeaway
Given the current conditions in the energy sector, the most important number for CVR Energy investors to focus on right now is its cash position. The company actually had more cash than debt at the end of last year, which put it in a position to acquire Rentech. It still has ample financial flexibility, which puts it in a really strong position to be both defensive and offensive during the current turbulent market conditions.