Please ensure Javascript is enabled for purposes of website accessibility
Log In Help Join The Motley Fool
Free Article Join Over 1 Million Premium Members And Get More In-Depth Stock Guidance and Research
By Tyler Crowe, Jason Hall, and Reuben Gregg Brewer - May 7, 2016 at 10:06AM

Some oil and gas companies will have you fretting over the price of oil every day. ExxonMobil, Enterprise Products Partners, and Phillips 66 are three stocks that won't.

Perhaps one of the hardest things about investing in general, and especially in cyclical industries such as energy, is keeping your cool while Wall Street constantly works itself into a frenzy about every little detail. Some investors are naturally good at it, but it's not in everyone's DNA. For those who aren't, you can still invest in volatile markets such as energy -- it's just better that you look for solid, steady businesses that aren't going to be wildly affected by the day-to-day tumult of the market.

We asked three of our contributors to highlight one stock they see as a company that's built for the long haul and doesn't need to be fretted over every day. Here's what they had to say.

Reuben Gregg Brewer
ExxonMobil (XOM 1.76%) is conservatively managed, diversified, and one of the best-run oil majors. It's never cheap, but in this case it's worth paying up for quality.

For example, while many in the oil industry are worried about bankruptcy, ExxonMobil started 2016 with long-term debt at about 10% of its capital structure. It definitely didn't overextend itself in the oil boom. Even though the company recently lost its AAA credit rating from Standard & Poor's, its AA+ rating is still the best in the business and could revert back to that AAA if we were to see oil and gas prices recover.

One of the reasons ExxonMobil is so well situated, however, is its basic business model. It isn't just an oil driller; it's also a refiner and chemical company. Oil's pain works to the benefit of its other businesses, because it lowers their input costs. So one side balances the other, leading to a generally smoother ride.

None of this, however, would be as enticing if it weren't also one of the best-run oil companies around. For example, it has historically led the pack in return on invested capital. Essentially, when it comes to putting your money to work, ExxonMobil earns more for you than its peers do.

So if you're looking for a well-diversified, financially stable, and well-run oil company, ExxonMobil fits the bill. Some people focus on the company's more than 30 years of annual dividend increases, but that's just the tip of the iceberg. This oil giant is definitely a sleep-well-at-night investment.

Tyler Crowe
Considering the putrid performance and dividend cuts of companies in the pipeline and midstream business, you might assume you need to scour through every news release to make sure an investment in this industry doesn't blow up in your face. However, there are a select few midstream companies that don't need that sort of hand-holding, and one that really rises above the rest is Enterprise Products Partners (EPD 2.09%).

Enterprise's portfolio doesn't really stand out as being anything special compared with its peers'. Rather, it's the way in which management has run this business over the past several years that makes its stand out. Instead of pursuing rapid growth, pushing payouts to shareholders at a breakneck pace, and inhaling capital like Cookie Monster, Enterprise has instead elected to focus on growing its payout at a modest 5% clip annually while retaining large chunks of operational cash flow to pay for growth. This "slow and steady" approach has allowed Enterprise to maintain a better balance sheet as well as not constantly issuing new shares to grow. 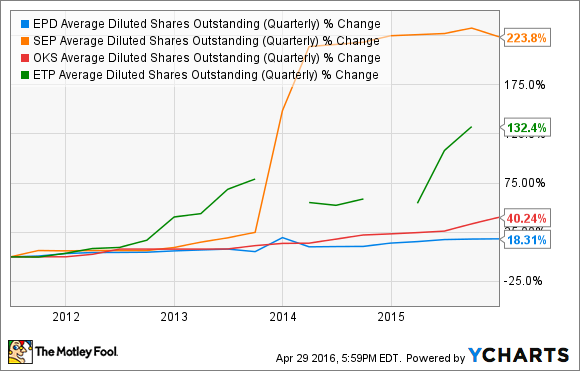 This approach has led to 47 consecutive quarters of distribution increases, and its recent earnings report suggests it will be able to keep this streak going for a while longer. Knowing that Enterprise's management have been such great stewards for investors for many years, you don't need to spend sleepless nights watching over this stock.

Jason Hall
The oil and gas industry isn't a place where you'll find a lot of companies that are easy to invest in and not worry about. Phillips 66 (PSX 0.72%) is one of the few, and here are some key reasons:

The company's just-announced first quarter was probably the most difficult it's faced during the downturn, with the crack spread -- which measures the price of oil and the price a company can get for the products it makes from oil -- being its narrowest in years. Yet even through this environment, the company was able to produce a $385 million profit and $722 million in cash from operations.

While profits are well down from one year ago, there's little reason to expect them to dry up. To the contrary, investments in midstream and chemicals growth will probably push them higher, even if refining profits don't rebound quickly. Add in very cheap debt and over $1.7 billion in cash on hand, and Phillips 66 is an ideal oil and gas stock to own and not have to fuss over.