Please ensure Javascript is enabled for purposes of website accessibility
Log In Help Join The Motley Fool
Free Article Join Over 1 Million Premium Members And Get More In-Depth Stock Guidance and Research
By Jeremy Bowman - May 7, 2016 at 1:21PM

The retailer had another tough month as its sales slide continued.

What: Shares of surf-and-skate apparel retailer Zumiez (ZUMZ -2.65%) were biting the dust last month, falling 16%, according to data from S&P Global Market Intelligence. The drop was primarily due to a weak monthly sales report for March as most of the stock's descent took place in the days after the report came out on April 6. 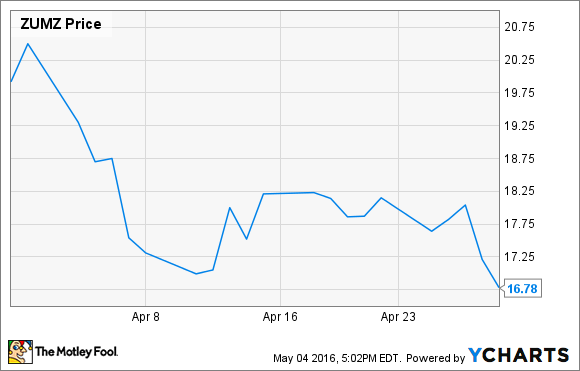 So what: Zumiez said comparable sales fell 7.8% in March, worse than the 5.5% drop in the same period a year ago. Overall sales decreased 2.6% to $68.8 million. Management blamed a shift in the Easter holiday for the decline in comps, saying that it expected a recovery in April.

The slide tracked with a number of apparel retailers that reported disappointing monthly sales in March, including Gap, where comps fell 5%. Several other apparel retailers and department-store chains fell by 10% or more last month on general weakness in the industry.

Now what: Zumiez shares began a long slide around this time last year that has wiped out more than 50% of is value as comps have tumbled. So it's disappointing that even as it laps a 5.5% drop, that same-store decline has gotten worse. April same-store sales were almost as bad, slumping 6% against expectations of a 5.4% drop.

Management has acknowledged that its merchandise selection has been off at times, and overexpansion seems to be a problem as well. The company is now eyeing a loss of about $0.11 per share for the first quarter. With comparable sales falling in the high single digits, things may only get worse.

Why Zumiez Stock Just Wiped Out