Please ensure Javascript is enabled for purposes of website accessibility
Log In Help Join The Motley Fool
Free Article Join Over 1 Million Premium Members And Get More In-Depth Stock Guidance and Research
By Todd Campbell - May 12, 2016 at 2:47PM

The disclosure of a delay in filing its first quarter financials with the SEC is sending shares reeling. What: After issuing a press release earlier Thursday saying it is delaying the filing of its first quarter financials while it awaits independent insight into two non-cash accounting matters, shares of Nobilis Health Corp. (HLTH) are down 21.8% at 2:15 p.m. EST Thursday.

So what: On Tuesday, the full-service healthcare development and management company updated investors on its first quarter financials and this morning, management reported that it is delaying the filing of its quarterly 10-Q with the SEC until it gets insight on what the company describes as "two narrow, non-cash accounting entries."

In Q1, Nobilis Health indicated that spending on technology and infrastructure resulted in the company losing $5 million. That loss came even as revenue increased 35% to $51.3 million. The first quarter loss of $0.07 per share was $0.08 worse than industry watchers were hoping for. The company also cited headwinds associated with "the impact of significant legal and accounting expenses related to the October short attack" as a reason for the lackluster report.

Investors responded to the first quarter financials by knocking shares down sharply, something that was repeated Thursday when the company, which currently owns or manages outpatient healthcare facilities, said it was going to need a bit more time to officially close the books on the quarter. 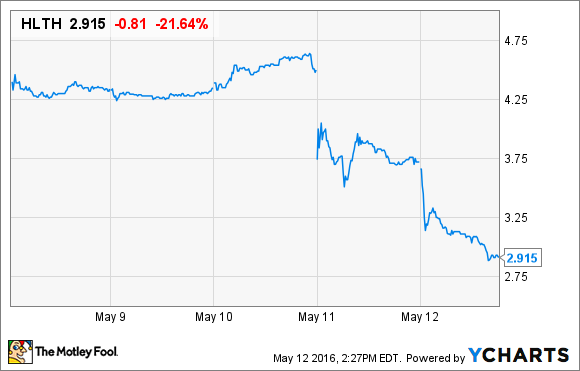 Now what: A disappointing bottom line isn't necessarily a harbinger of doom, but I tend to get a bit nervous when non-operational factors, such as responding to a "short attack" get highlighted by management as a reason for them.

Today's revelation of a delay in filing financials also isn't overly concerning to me, at least not yet. But it does create uncertainty and that's never something that investors applaud. Given the company's tepid first quarter performance and the news of this delay, investors should probably focus on other investing ideas rather than attempt to bargain hunt this stock. At least until that 10-Q gets filed.

Why Nobilis Health Is Skyrocketing 19% Today