Nike's SNKR app, one of many apps in its suite. Image source: Nike.

Nike (NYSE:NKE) announced in March that it was preparing to launch a new version of its Nike+ mobile app this summer. In the announcement, Nike gave insight into all the things the app would do, such as have a social media-like feed, customized fitness content, the ability to book appointments at Nike stores and events, and, most importantly, a mobile shopping feature tailored to the consumer to make finding and buying Nike gear easier than ever. The app was finally made public this month.
After changing its technology strategy over the past few years by completely killing its physical wearable device to instead focus on a pure digital strategy, will this new app actually help Nike drive more income growth?

In 2012, Nike launched the FuelBand. This wearable tracker used "Fuel Points," a system that Nike created to track output without having to track steps, heart rate, and so on. However, in 2014, Nike suddenly closed that operating segment, eliminating most of its team. Other companies, such as Fitbit (NYSE:FIT) and, more recently, Under Armour (NYSE:UAA) continue to compete in the hardware space, looking to take part in what is estimated to be a $34 billion market by 2020.
Instead, Nike has since moved toward pure digital strategy, starting with upgrading Nike.com and then advancing its suite of mobile apps. Many of Nike's apps are very focused on specific sports and helping athletes perform better, such as Nike+ Running. This new Nike+ app upgrade is important because it brings together training tips, social sharing, and other member features with shopping, including customized recommendations that Nike believes will help to drive more sales. 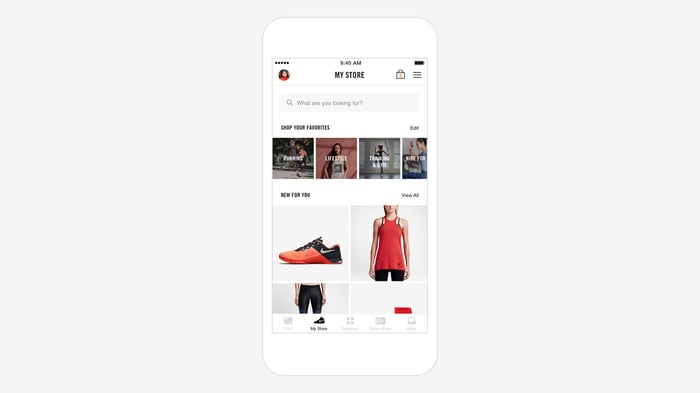 Why e-commerce is important

In fiscal year 2016 ended May 31, Nike grew e-commerce sales 51% over the prior year. E-commerce is important for multiple reasons, one of the biggest being that it helps Nike to increase its profit margin so that its sales translate to more income. There are three ways e-commerce helps increase margins:
1. No middle person. Selling through a retailer means that Nike has to pay a cut of the total sale price to that retailer, diminishing Nike's margin on its gear.
2. Higher average selling prices.Nike has also been successful in raising average selling prices, partially thanks to NikeID, an online tool that allows consumers to customize some Nike items with their own words, colors, etc. for a fee.
3. Better inventory management. For online sales that ship directly to consumers, Nike can have warehouses in low-cost areas, rather than trying to estimate and time the delivery of bulk merchandise to stores and having to discount items that aren't selling well enough. Inventory mismanagement is one reason Nike's gross margin actually declined in the most recent quarter year over year, hurting income.
E-commerce is also an important tool for Nike to continue growing internationally, especially in areas that it doesn't have strong local retail partners. Nike received more than half of its sales in the recent fiscal year outside of the U.S. However, Nike.com is available in only 20 countries. That's about to change.

In the earnings call, Nike management said it's preparing to open up Nike.com services in 20 more countries in fiscal 2017. Nike's mobile app is especially important in many countries where the population is increasingly accessing the internet through mobile devices, oftentimes completely bypassing the transition to desktop. In China for instance, over 70% of those who used the internet for the first time in 2015 accessed the web through a mobile device instead of a desktop.

Takeaway: the new app is a good bet

This is not to say that the wearable market isn't a great opportunity, and that the companies still competing in it don't have their own strategies for success. And it's not to say that a mixed wearables and digital focus, such as what Under Armour is employing with its own new shopping app that collects data from its wearables, doesn't have its own advantages.

However, Nike's investment in this new app plays clearly into its new digital strategy that seeks to connect intimately with the consumer and ramp up direct-to-consumer sales of its gear all around the world. Nike's e-commerce sales growth in fiscal 2016 was impressive, and thanks to advancements in Nike's digital infrastructure, such as with this new app, that growth should accelerate going forward. Because of direct-to-consumer sales' positive effect on profit margin, Nike's new digital strategy seems to be a winning one for Nike's bottom line.