As the dominant player behind the designs of nearly all mobile application processors, expectations have been running high for quite some time, as shares now trade near 70 times earnings. 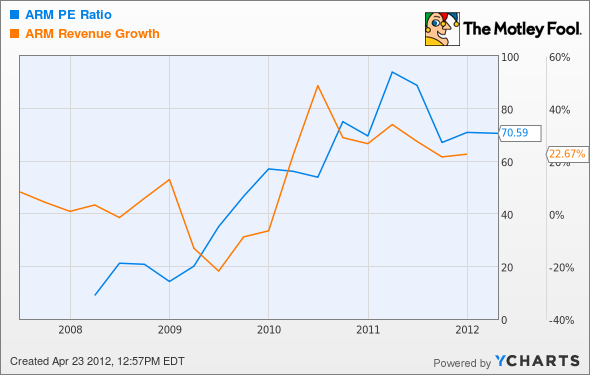 Analysts are looking for revenue of $201.2 million and earnings per share of $0.14. That sales forecast is right on target with the company's own guidance, which expects revenue to be right around $200 million. The company easily topped expectations last quarter, as it continues to build momentum in inking new licensing deals that pave the way for years of recurring royalty revenue.

That top-line estimate for the current quarter represents a modest 8.5% sales growth, with the bottom line being just a penny better than the $0.13 EPS seen last year.

ARM is treading carefully with its guidance for full-year 2012, as it expects macro uncertainties to affect consumer and enterprise spending and potentially hurting the broader semiconductor industry. Assuming the macro picture doesn't get worse, the company is looking for full-year revenue of a little more than $860 million.

This year will be an important competitive test for ARM and its partners, as Intel is making a big step into ARM territory with its Medfield Atom mobile processor. In fact, the first Atom-powered smartphone, the Lava Xolo X900, just launched today in the Indian market.

Most consumers aren't likely to be familiar with the offering, but domestic players including Motorola Mobility have also partnered with Chipzilla and are planning to release more Atom-powered mobile gadgets this year. Motorola has typically used ARM chips from Texas Instruments in its devices, but Moto is looking to broaden its horizons.

In the interest of full disclosure, I recently sold my own ARM shares. I like the company's prospects, but I began to have reservations over its high multiples and royalty monetization. On top of that, I needed to do some rebalancing in my portfolio for personal reasons, as I'm already too overweight in high-multiple stocks.

That being said, ARM's future remains promising in growth areas like smart TVs, embedded devices, servers, and Microsoft Windows 8 devices, so it will remain on my Watchlist. As it grows into its valuation, I may find myself a shareholder again one day, but for now I needed to reduce my personal risk profile.

One of ARM's partners is helping to power The Next Trillion-Dollar Revolution. This company is poised to cash in on the rise of smartphones and tablets, in large part to its ARM-based chips. Get the free report now.