Return on equity is an easy-to-calculate valuation and growth metric for a publicly traded company. It can be a powerful weapon in your investing arsenal as long as you understand its limitations and how to use it properly.

What is return on equity (ROE)?

Return on equity is primarily a means of gauging the moneymaking power of a business. By comparing the three pillars of corporate management -- profitability, asset management, and financial leverage (debt) -- ROE tells an investor a lot about the effectiveness of a company's executive team and the overall strength of its business. 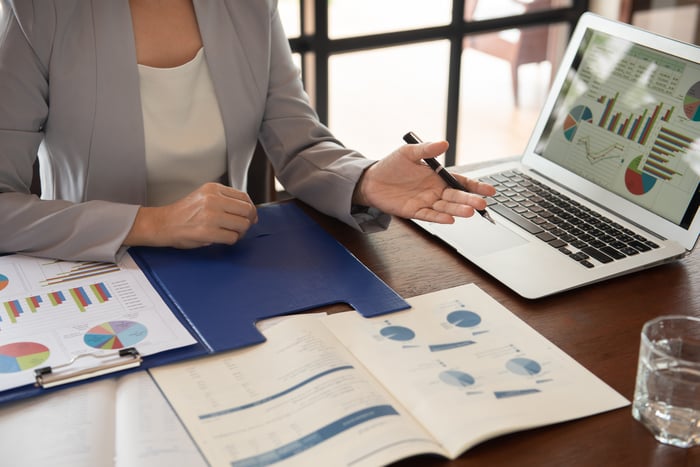 How to calculate return on equity

You can calculate return on equity by taking a year's worth of earnings and dividing that by the average shareholder equity for that year.

Net earnings can be pulled directly from the earnings statement on the company's most recent annual report. Alternatively, to calculate ROE for a period other than the company's last fiscal year, you can add the net earnings from the company's four most recent quarterly financial statements. You can also multiply the previous quarter's results by four to get an annualized figure, but that may be misleading. If the business you're evaluating is seasonal -- with big fluctuations in earnings between quarters -- you could get a skewed result.

Let's say we want to compute the return on equity of imaginary company Joe's Holiday Warehouse, Inc., which has just reported its Q2 2022 earnings. Here are the figures we would use from the company's last four quarterly earnings reports:

As you'd expect, Joe's sales are very uneven, peaking during the holiday season and nearly nonexistent during the first quarter of the year.

How to use ROE

The higher a company's ROE percentage, the better. A higher percentage indicates a company is more effective at generating profit from its existing assets. Likewise, a company that sees increases in its ROE over time is likely getting more efficient.

A business that creates a lot of shareholder equity is usually a sound investment. Investors will be repaid with the proceeds that come from the business's operations, either when the company reinvests them to grow the business or directly, through dividends or share buybacks. A business generating a healthy ROE is often self-funding and will require no additional debt or equity investments, either of which could dilute or decrease shareholder value.

In our above example, Joe's Holiday Warehouse, Inc. was able to generate 10% ROE, or $0.10 from every dollar of equity. If one of Joe's competitors had a 20% ROE, however -- churning out $0.20 from every dollar of equity -- it would likely be a better investment than Joe's. If the two companies were reinvesting the majority of their profits back into the business, we'd expect to see growth rates roughly equal to those ROEs.

What are the limitations of ROE?

The major drawback of this metric -- and why it should never be looked at in a vacuum -- is debt.

Because liabilities like long-term debt are subtracted from assets when shareholders' equity is computed, a company's debt load (which is counted as a liability) affects ROE. Specifically, a higher debt load will reduce the denominator of the equation, which will yield a higher ROE. That's not a bug, though; it's a feature.

If Joe's Holiday Warehouse takes on $1 billion in debt to buy $1 billion worth of candy canes, the assets (candy canes) and liabilities (debt) will cancel each other out. That yields a better picture of the company's financial health than the similar metric return on assets (ROA), which would reflect the value of the unsold candy canes but not the accompanying debt.

However, if Joe's instead took on $2 billion in debt to buy just $1 billion of candy canes, it would actually post a higher ROE. That's because the denominator of the equation would be reduced by the additional $1 billion in debt, yielding a higher overall result. For heavily indebted companies, this can yield artificially high ROEs (unless, of course, the company's liabilities outweigh its assets).

For that reason, it's best to look at debt loads and ROA in conjunction with ROE to get a more complete picture of a company's overall fiscal health. You can also look at other, narrower return metrics like return on capital employed (ROCE) and return on invested capital (ROIC).