Weighted average is a powerful tool for investors that can be used to:

To understand how weighted average can achieve all these things, let's start with the nuts and bolts of the calculation.

It makes sense that massive companies, such as ExxonMobil (NYSE:XOM) and Apple (NASDAQ:AAPL), compared to smaller companies at the bottom of the list, will have a greater influence on the movement of the entire index. If only a few of the largest companies in the index have a lousy day, while a bunch of the smaller companies do well, the index will often reflect the woes of those big fish rather than the wows of the little ones. 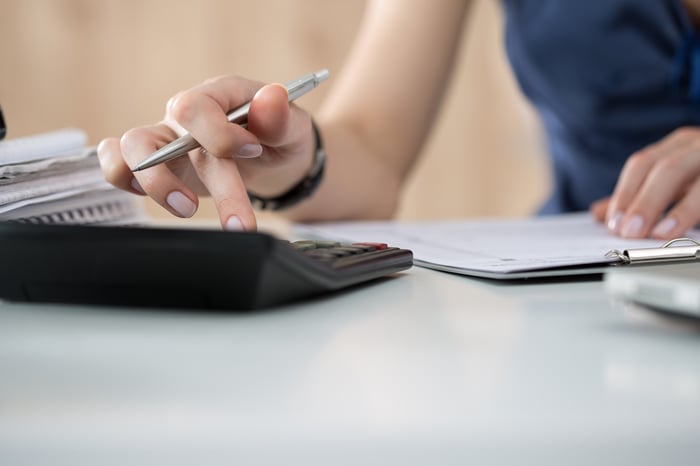 How to calculate weighted average cost of capital

Here are five steps that will make this easier:

Start the calculation with cost of equity

A stock's WAAC starts with an individual stock's cost of equity, which can be derived with either of two methods.

As a long-term investor, you expect the business you have bought into to generate a return. To achieve this, a company's return on invested capital (ROIC) should exceed its cost of capital. Basically, the money it can generate from an investment should be greater than the interest costs on that investment.

There are two main ways companies get capital -- by issuing new stock or by taking on debt. The cost of debt is simply the interest expense as a percentage of the total debt. On the other hand, the cost of equity can be evaluated in two different ways:

If a company pays dividends, the cost of equity can be determined by the dividend capitalization model (the easier method of the two). Simply divide the company's per-share dividend by its current stock price and add the dividend growth rate. Here's the formula to calculate cost of equity using this method:

For example, if each share of Company X trades for $50 and produces a $1 annual dividend, it has a dividend yield of 2%. And, if Company X has consistently grown its dividend in recent years by around 5%, we can add those together to find Company X's cost of equity is 7%.

On the other hand, if a company does not pay dividends, or if you simply want a method that can be applied to all stocks, the capital asset pricing model (CAPM) could be the better way to go. This is considerably more complicated and can be calculated by this formula:

Consider this hypothetical example. Company XYZ has a $100 billion equity market capitalization and $25 billion in debt at a weighted average interest rate of 4%. The company pays a 3% dividend yield and has increased its dividend at an average rate of 5% per year.

There are a couple variations of weighted average cost of capital that are worth mentioning as well:

Marginal cost of capital: The weighted average cost of the newest capital raised by a company or proposed to be raised by a company. For example, if a company wants to sell $100 million in bonds at 5% and simultaneously issue 10 million new shares of stock, the marginal cost of capital would only consider those new additions, not the rest of the company's debt and equity capital.

While most investors won't regularly perform WACC calculations, this is still an important concept to know. Companies that can raise money at low costs of capital relative to their ROIC may have an advantage over companies that cannot. Weighted average cost of capital gives investors valuable information about a company's efficiency when it comes to raising capital to put to work for investors. Like any investment metric, it doesn't tell the whole story by itself, so it should be used as part of a more thorough investment analysis.