The rise of Beyond Meat (NASDAQ:BYND) has been beyond incredible. While most retail investors missed out on the opportunity to get in at the ridiculously oversubscribed IPO at the ground level, from a longer-term perspective, there are still plenty of ways to indirectly profit from the continued rise of the plant-based meat substitutes.

Such non-meat meats as Beyond Meat are seen as the biggest thing to hit the food industry since sliced bread. And although Beyond Meat is seen as the top way to play the "white-hot" trend, at today's valuations, it makes way more sense to bet on select fast-food firms that are incorporating meat-based substitutes into their menus. 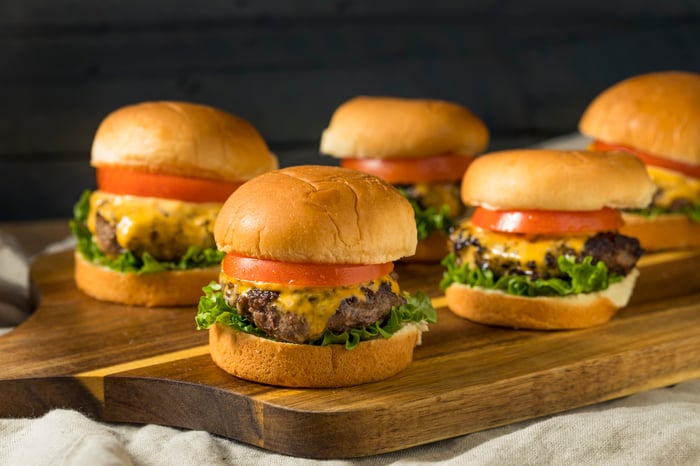 After Beyond Meat stock's incredible run-up, the stock's valuation is looking "beyond stupid" as Citron Research's Andrew Left tweeted out to his followers on Friday. Left's an infamous short-seller that's been known to make gutsy bets against frothy stocks, and although I'd never advise a Fool to do something as "nuts" as betting against Beyond Meat, I do agree with Left when he says that the company's valuation is "beyond stupid."

Shares of Beyond Meat are currently trading at around 50 times sales (that's sales, not earnings!), making it one of the most expensive stocks that an investor will ever see outside of the crazy world of marijuana.

Moreover, Beyond Meat may be just the first of many players in what could be a very crowded space. Sure, the meatless meat market may be massive, but with little visibility on the durability of Beyond Meat's moat (if it has a moat at all), a fierce level of competition should be expected. And only until we compare all products side by side would it make sense to place a bet on a meatless meat player.

Restaurant Brands International (NYSE:QSR) has been doubling down on the rise of plant-based meat substitutes with the launch of the Impossible Whopper at Burger King, with Beyond Meat breakfast sandwiches being launched at Tim Hortons' locations. Restaurant Brands was definitely quick to hop on the meatless meat bandwagon and shares have popped because of it.

Seeing as Restaurant Brands is a great way to play all potential players in the meatless meat market (Beat Meat, Impossible Foods and other competitors as they come along), I'd say that it makes a heck of a lot more sense to buy shares of Restaurant Brands at 18.2 times next year's expected earnings and 5.9 times sales than to place a bet on one meatless meat player at 50 times sales.

For Restaurant Brands, the rise of meatless meat will supercharge menu innovation and will serve as rocket fuel for the stock that's been picking up major traction in recent months.

As Restaurant Brands moves ahead with its ambitious expansion (the firm plans to grow to more than 40,000 locations over the next decade), as comps get bolstered by innovations going on in the meatless meat scene, I see Restaurant Brands as one of the best long-term growth stocks to own on the entire TSX Index.