Real estate investment trusts (REITs) have always been a popular investment vehicle for those of us looking for both a stable stream of income and potential capital growth. Link REIT (SEHK: 0823) has been a popular choice for many investors in Hong Kong, the mega-REIT has slowed down in recent history, and is now yielding just a slim 2.8% return. In an ever-changing real estate landscape like Singapore's, it makes sense to look elsewhere for income and sustainable growth. For dividend investors who want exposure to Asia, as well as regular income, Singapore REITs may be the answer.

So far this year, REITs have enjoyed a steady growth rate as the US Federal Reserve looks dovish with its monetary policy by cutting interest rates. What's more, dividend income in Singapore (similar to Hong Kong) has a 0% withholding tax on it. With that in mind, the Singapore Exchange recently revealed that there are 11 retail REITs listed in Singapore and out of these, four have given shareholders total returns of more than 30% in 2019. Let's take a closer look at the four to see where the best opportunities lie for investors. 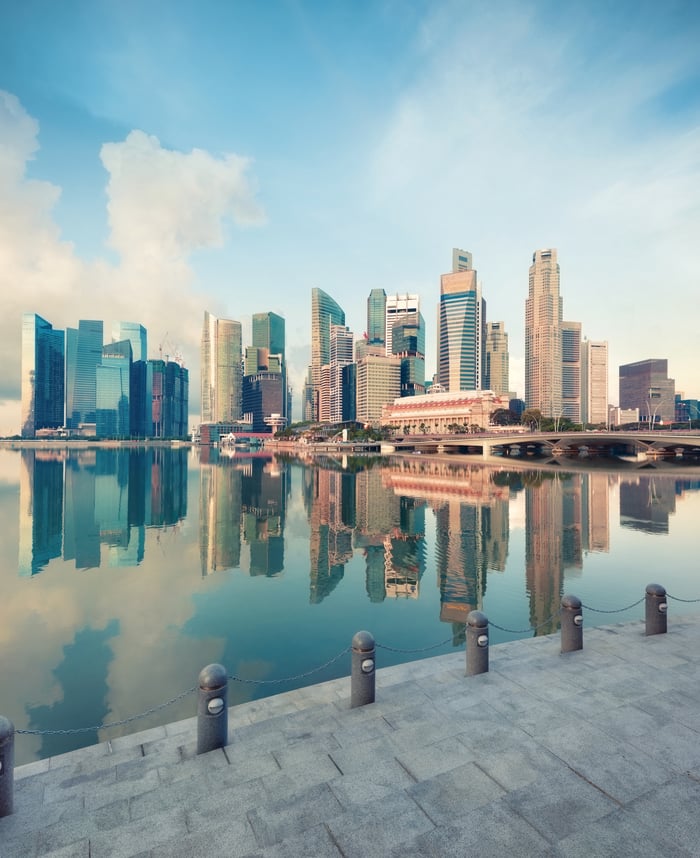 Lippo Malls Indonesia Retail Trust (SGX: D5IU), or LMIR Trust, owns 23 retail malls and seven retail spaces across Indonesia with a total portfolio value of S$1.84 billion as of 31 December 2018. Although it has delivered a solid positive total return of 37.2% so far in 2019, investors should be aware that this was amid a falling distribution per unit (DPU) for Q1 2019.

Its most recent quarter (Q1 2019) saw DPU plummet 17.9% year-on-year to 0.55 Singapore cents from 0.67 cents in Q1 2018. LMIR Trust's trailing 12-month distribution yield is around 8.4% but, as we all know, we shouldn't be sucked in by artificially high yields that could indicate other issues such as the ability of the company to keep paying out dividends.

The second-best retail REIT in 2019 was Mapletree North Asia Commercial Trust (SGX:RW0U), or MNACT, an owner of nine commercial as well as retail properties across China, Hong Kong, and Japan. It has delivered total returns of 32% so far this year and what's more, that has come on the back of a rising DPU.

For its Q4 FY18/19 that ended on 31 March 2019, MNACT's DPU rose around 2.5% year-on-year while its full-year DPU saw an increase of 2.8% over the previous year. It was also the best-performing REIT of the top four over a three-year period (see below). Its portfolio's high occupancy rate of 99.6% is also impressive. MNACT's units are currently offering investors a distribution yield of 5.2%.

Sasseur REIT (SGX:CRPU), a retail REIT that owns four outlets malls in China, comes in at number three as it generated total returns of 31.7% so far in 2019. Sasseur REIT has consistently beaten its IPO forecast for its DPU in all four quarters it has operated as a listed entity.

In its most recent quarter, it beat its projected DPU by 9.3% and was able to deliver a DPU of 1.656 cents. This came partly from a high occupancy rate (96.1%) and rental income that exceeded projections. Its low gearing of only 29.2% – as of 31 March 2019 – also gives it headroom to grow through acquisitions. Sasseur is currently trading at an attractive distribution yield of 8.3%.

Finally, there's the retail mall stalwart that is Frasers Centrepoint Trust (SGX:J69U), or FCT. It owns retail assets everyone in Singapore will be familiar with, including Causeway Point, Northpoint City North Wing, Anchorpoint, Yewtee Point, Bedok Point, and Changi City Point. It has raised its dividend every single year since listing and is seen as a solid REIT in the retail space. It has delivered total positive returns of 30.3% so far in 2019.

Its most recent quarter, which was Q2 FY2019, saw its DPU rise 1.2% year-on-year to 3.137 cents. It has a solid parent in Frasers Properties (SGX:TQ5) and recently announced the purchase of Waterway Point for S$433.3 million. This should provide FCT with extra income, which should naturally translate into a higher DPU in future. The only catch, though, is that FCT yields the least, offering investors a trailing 12-month distribution yield of 4.6%.

The four Singapore-listed retail REITs above have all performed well so far in 2019. However, if I was to pick one it would be MNACT. I like its solid track record of growing its DPU, its solid mix of both retail and commercial properties, and perhaps most importantly the quality of its portfolio – including the likes of Festival Walk in Hong Kong. However, as with all investments, putting your money into a REIT means you should be aware of all the opportunities and risks that come with it.