The stock market crash of 1929 followed an epic period of economic growth during what's now known as the Roaring Twenties. The Dow Jones Industrial Average (DJINDICES:^DJI) was at 63 points in August 1921 and increased six-fold over the next eight years, closing at a high of 381.17 points on Sept. 3, 1929. That September day marked the peak of the greatest uninterrupted bull market the United States had ever seen.

The market's plunge from its peak was so deep that it sent the nation into an economic depression for more than a decade. Here's a close look at what happened during the devastating stock market crash of 1929 and what triggered the collapse. 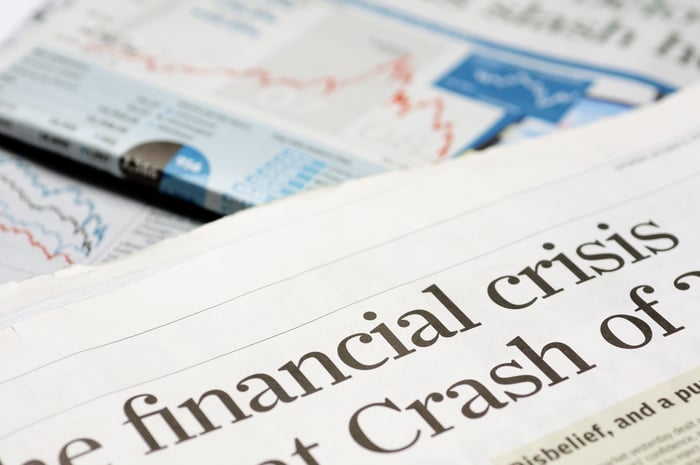 What happened in 1929 when the stock market crashed?

While the stock market's decline officially began following Sept. 4, 1929, the worst of the crash didn't occur until more than a month later. On Monday, October 29, the Dow Jones Industrial Average plunged by nearly 13%. The next day, the index tumbled by another almost 12%. These devastating two days have since become known as Black Monday and Black Tuesday.

Over the months and years that followed, the stock market continued to lose value. By mid-November 1929, the Dow had declined by almost half. It didn't reach its lowest point until midway through 1932, when it closed at 41.22 points -- 89% below its peak. The Dow didn't again return to its September 1929, high until November 1954.

What caused the 1929 stock market crash?

The many bullish investors of the Roaring Twenties fueled a bubble in the stock market. The perennially rising stock prices gave consumers a sense of economic optimism, prompting them to spend money aggressively on goods like cars and telephones. They were so confident in the future that they often bought items on credit. By 1927, 15% of all major consumer purchases were being made on installment plans. People in the 1920s acquired six of every 10 automobiles and eight of every 10 radios on credit.

This debt-fueled buying binge was enabled by thousands of banks and hundreds of new "installment credit" companies, which loaned money to essentially anyone who wanted it. Foreign lenders seeking to profit from the growing U.S. economy eagerly supplied gold and assets to U.S. banks, and many of the installment credit companies were simply lending arms of major U.S. manufacturers. Consumer debt as a percentage of income more than doubled during the decade. By September 1929, total noncorporate debt in the U.S. amounted to 40% of the nation's Gross Domestic Product (GDP).

At the same time that readily available credit was fueling consumer spending, the buoyant stock market gave rise to many new brokerage houses and investment trusts, which enabled the average person to buy stocks. These amateur investors, in addition to buying stocks outright, also began opening margin accounts, which facilitate stock purchases using borrowed money. Investors with margin accounts are usually required to pay only 10% of a stock's purchase price initially; the stock itself serves as collateral for the remaining 90%. As investors increasingly used margin accounts to buy stocks that they could not afford, new money flowed rapidly into the stock market, causing stock prices to inflate.

In the wake of the crash, the banks and other lenders that financed the stock-buying spree had little means to collect what they were owed. Their only collateral was stocks for which the amount of debt outstanding exceeded the stocks' worth. These institutions had little choice but to begin limiting all other forms of lending, including credit for consumer purchases. With less available consumer credit, a lot fewer people were able to purchase big-ticket items, causing consumer spending to sharply decline. Businesses shrunk or closed, resulting in millions of people losing their jobs and becoming unable to repay their own debts to the banks. The banks, too, failed by the thousands as many of their borrowers defaulted on their loans.

Did the stock market crash cause the Great Depression?

The stock market crash of 1929 was a cause, but not the sole driver, of the Great Depression. The 1929 crash served as a critical catalyst that triggered the start of that devastating economic downturn. The bursting of the stock market's bubble unleashed a cascade of market forces that plagued the U.S. economy for years after 1929. The economy likely could have recovered more quickly in those ensuing years had the combined impacts of excessive borrowing, business closures, and mass layoffs not exacerbated and prolonged the crisis.