When businesses talk about run rate, they are extrapolating data from one period of time to make projections about a longer period. Usually this is to show what a key performance metric such as revenue or profits would be for a year, using data from a month or a quarter.

If a company earns $1 million during the first quarter, you could say that its run rate is $4 million, or $1 million times four. If a business is growing quickly, a CEO might prefer to talk about the run rate of its revenue or profits based on the latest month rather than only presenting past results. 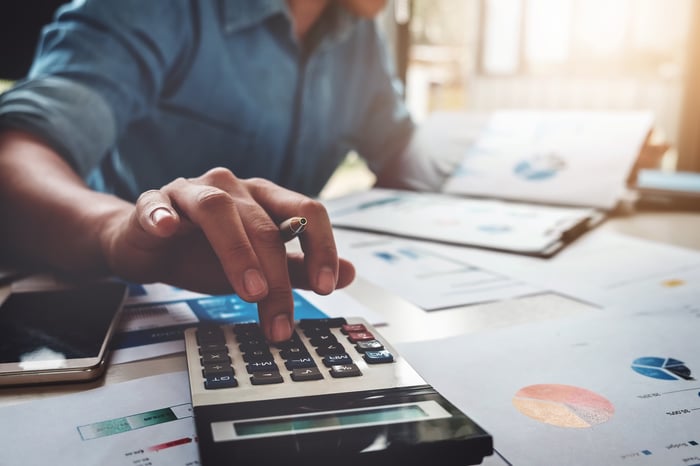 The greatest benefit of considering run rate is that it offers an easy way to estimate how much a company or one of its business segments might earn in a given period. If the data available is only for a month or a quarter, such as with a newly public company, you can use run rate to get a sense of how the company might perform over the course of the upcoming year. Similarly, when a company makes a major acquisition or a similar change that significantly expands its business, it's helpful to use run rate since comparisons to older periods are not very useful. If an acquisition leads to quarterly revenue jumping from $100 million to $150 million, then using the $100 million figure is irrelevant.

Companies frequently use run rate as a way to quantify projected future growth. For example, a company might forecast a $1 billion annual run rate revenue by 2023. Using run rate in this instance provides more flexibility than using the calendar year.

It's also common for companies to talk about run rates in terms of cost savings. When two businesses merge, they might project run rate savings of $200 million annually as a result of expected synergies.

How to calculate run rate

It's easy to use run rate too liberally, and companies can use run rate numbers to make their performance look better than it is -- although a good management team doesn't do this. A company's calculated run rate can also be misleading in other ways.

Most businesses experience some kind of seasonality, meaning that performance naturally peaks in one part of the year and slows in another. In the retail industry, sales typically spike during the holiday season, so the fourth-quarter performance is usually the best. Some retailers even make most or all of their profits during the fourth quarter.

The chart below shows how quarterly sales might break down for such a business. This business finished the year with $285,000 in sales, but since revenue is skewed toward the fourth quarter, calculating the run rate for any single period yields inaccurate annual results.

One-time events such as a hit new product release or an acquisition or divestiture can also skew a company's results from quarter to quarter, making the use of run rate unhelpful as a metric. Using the run rate for just one month or a quarter can also be a poor way of projecting results for a high-growth business since results are likely to improve over the course of the year.

Run rate can be easily manipulated. Whether or not you use run rate in your own analysis, business executives often discuss run rates in their forecasts, so it's an important term for investors to understand.