A closer look at the fast-growing vertical farming sector.

With the global population continuing to expand, the world will need to double its food supply over the next three decades. That's a daunting task, especially as arable land for farming shrinks due to climate change, urban sprawl, and soil destruction. At the current pace, farmable land could fall 50% by 2050, making an already daunting challenge even tougher.

Since it's become more challenging to find additional farmland to meet our growing food needs, farmers are starting to go vertical. Here's a closer look at some of the agricultural companies focused on vertical farming. 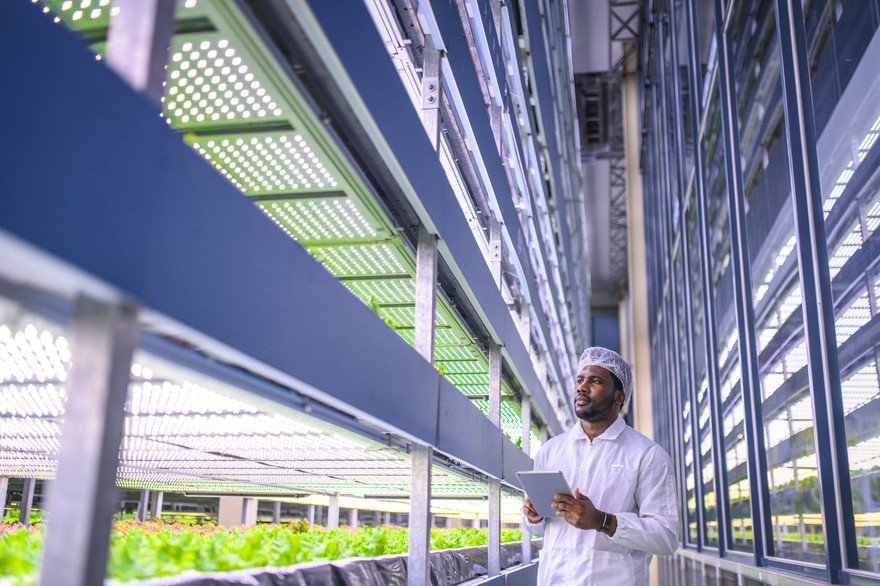 Here's a closer look at some of these indoor vertical farming stocks.

Spring Valley Acquisition is a SPAC formed to focus on sustainability. In March 2021, it agreed to combine with AeroFarms, a leading indoor farming company. It patented a vertical farming technology that uses 95% less water and achieves 390 times greater productivity per square foot vs. traditional field farming and without using pesticides. Its technology allows for year-round growing and also presents a possible solution to the challenges of population growth, water scarcity, and declining arable land for agriculture.

The company has grown more than 550 varieties of produce, including leafy greens, fruits, and vegetables. AeroFarms sells leafy greens to the retail marketplace in the Northeast, including at Amazon (NASDAQ:AMZN) subsidiary Whole Foods. The company's products tend to have superior flavor and taste compared to other locally produced leafy greens.

The business combination between Spring Valley and AeroFarms will provide the vertical farming company with the funding to expand. It will finance the construction of additional farms that will grow leafy greens and other product categories ripe for disruption such as strawberries. The company believes that, as it expands its farming capacity, it will become more efficient, helping to reduce costs and improve profitability.

AppHarvest became the first publicly traded agriculture technology company when it completed its business combination with a SPAC in early 2021. The company builds and operates some of the country's largest high-tech indoor farms. It focuses on growing sustainable, affordable, nutritious, pesticide-free, and non-GMO fruits and vegetables. The company's vertical farming technique uses 90% less water than traditional open-field farming and utilizes 100% recycled rainwater.

The agtech stock's initial indoor vertical farm in Kentucky planted its first crops in October 2020. Spanning 60 acres, it's one of the largest high-tech greenhouses in the world. AppHarvest plants and harvests beefsteak tomatoes at the facility, which can produce 45 million pounds of tomatoes each year.

AppHarvest's business combination with a SPAC provided it with the funding to expand its vertical farming operations. It has already started construction on four additional controlled environment agricultural facilities that will grow tomatoes, leafy greens, and berries. The four facilities should become operational in 2022. It has a pipeline of as many as 12 large indoor farm projects that may be built through 2025. Meanwhile, AppHarvest is pursuing a joint venture with a major produce company that would allow it to build a network of controlled environment agricultural facilities in the U.S. to grow fresh fruits, vegetables, and leafy greens.

Kalera is a vertical farming company that uses technology to improve access to fresh and nutritious produce. The U.S.-based company has traded on a European exchange but announced plans in 2021 to merge with its wholly owned Luxembourg subsidiary, allowing its stock to trade on the Nasdaq exchange.

The company operates three vertical farming facilities in the U.S. and has several more under construction in this country and internationally. Kalera focuses on producing leafy greens in a cost-efficient and sustainable manner.

Kalera launched its international expansion in 2020 by acquiring &ever, a German vertical farming company with operations in the Middle East, Asia, and Europe. The deal transformed Kalera into a global vertical farming leader. It also enhanced its product line to include cut leaf baby greens such as spinach, kale, endive, arugula, watercress, cilantro, and bok choy.

Hydrofarm Holdings manufactures and distributes equipment and supplies for the controlled environment agriculture market, which includes vertical farming. The company's products include high-intensity grow lights, climate control solutions, and growing media. It focuses on the wholesale market, distributing its products to retailers from six centers in the U.S. and two in Canada.

The company has been actively expanding its portfolio by acquiring companies that manufacture complementary products. It made several deals in 2021, adding additional growing media and nutrient products used for hydroponic and vertical farming.

Hydrofarm Holdings aims to use its growing scale and financial strength to consolidate the highly fragmented controlled environment agriculture equipment and supply segment. That positions it to gain market share while it helps supply the fast-growing vertical farming market with the materials it needs to keep expanding food production.

Vertical farming could play a crucial role in helping to meet the world's growing demand for food, especially given the challenges of shrinking farmable acres. That sets investors up for a lot of growth as companies like AeroFarms, AppHarvest, and Kalera expand their farming operations. The expected growth will also benefit equipment and supply makers such as Hydrofarm Holdings. That makes these stocks interesting options for investors looking to get into this fast-growing space.

An in-depth look at the leading wheat stocks in the U.S stock market this year.