Water may be a commodity that you don't think about much when it comes out of the tap,  but water is essential to life. Not only that, it's a multibillion-dollar industry in the business world.

Water is a key input in everything from food and beverages to cleaning semiconductor wafers. The sourcing, purification, and distribution of water is big business around the world, and the threat of climate change makes that more true than ever.

Many climate scientists expect droughts to become more common in the coming years. These events are likely to make the price of water go up. Some believe that mass desalination, or removing salt from ocean water, will be necessary to ensure an adequate global water supply.

Whatever happens, demand for the resource is increasing while the supply is limited. That means now is a great time to consider investing in water stocks since water technology is advancing and the challenge of the climate crisis is likely to spawn further innovations. Most water stocks are utilities, although some can be classified as consumer staples stocks.

If you're looking to invest in water stocks, keep reading to learn about seven of the best water stocks you can buy today. 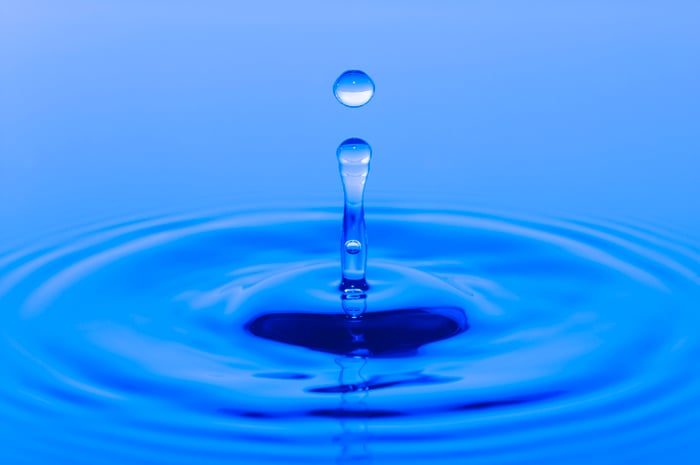 American Water Works may be one of the best examples of how boring stocks can quietly crush the market. Founded in 1886, the water utility went public at $21.50 a share in 2008 and was hovering around $160 a share in March 2022.

American Water Works is the country's largest water utility stock. Like other utilities, it benefits from being a regulated monopoly, meaning that the company doesn't face competition in the regions where it operates. In exchange, its prices are regulated by state and local governments.

Over the years, American Water Works has grown by investing in its own infrastructure through acquisitions and by seizing opportunities in market-based businesses such as its military services group.

The company plans to continue investing in the business and is forecasting between $22 billion and $25 billion in capital expenditures this decade to drive additional growth. It also completed 23 acquisitions in 2021.

American Water Works' earnings multiple has expanded considerably as the company has benefited from lower interest rates. This has caused investors to rotate from bonds into dividend stocks and lifted stock market multiples more generally, although that could reverse as interest rates rise.

While it's worth keeping an eye on interest rates, the company's size gives it an advantage in scalability and in making acquisitions. It pays a quarterly dividend of $2.41, or a 1.5% yield, as of March 2022.

As a water utility, York's growth is determined by the number of customers, as well as water and wastewater rates. Because it can't directly control prices, the best way for the company to grow is by increasing its customer base.

York Water has made a number of acquisitions in its territory to boost growth, but it operates in a slow-growing part of the country. The company's total customer count increased slightly from 71,411 at the end of 2019 to 73,144 at the end of 2021.

York Water pays a dividend yield of 1.8%, and its payout ratio is around 60%, meaning that investors can count on a continuing dividend.

Essential Utilities, formerly known as Aqua America, is a water and natural gas utility that serves about 5 million people under the Aqua and Peoples brands.

The company started as a utility in southeastern Pennsylvania and has grown into a presence across 10 states. It focuses on regulated water and wastewater, along with other utilities. In 2020, it entered the natural gas business by acquiring Peoples Natural Gas company, giving it 750,000 gas utility customers in three states.

Two-thirds of Essential Utilities' revenue now comes from water, with the remaining one-third from natural gas. The company is focused on growing in areas where it has a critical mass of operations to gain scale and increase efficiency.

Residential water companies have historically increased revenue by about 1% per year -- a reminder that utilities tend to be a slow-growth industry -- but rising rates helped, and acquisitions, including the natural gas business, helped drive revenue up 28% in 2021 to $1.88 billion. The company is also highly profitable, with a profit margin of 23%.

Essential Utilities currently pays a 2.2% dividend yield and has a long history of raising its dividend.

As of the end of 2020, the company's regulated utilities had 261,796 water customers and 24,545 electric customers. It also has a number of military contracts.

A majority of its revenue comes from Golden State Water Company, which is a subsidiary involved in the purchasing, production, and distribution of water in 10 California counties.

Like other utilities, American States Water Company benefits from a lack of competition. However, its growth has been modest in recent years, with revenue increasing 3% from 2019 to 2020.

American States Water Company has been less acquisitive than other water utilities, although its profits grew significantly from $1.62 per share in 2016 to $2.33 in 2020. The company has kept costs relatively flat even as rates have ticked up.

The company has been a reliable dividend payer, offering a dividend yield of 1.5% as of December 2021.

Middlesex Water Company was founded in 1897 and operates regulated water and wastewater utility systems in New Jersey and Delaware. It has approximately 115,000 customers across those two states.

Middlesex's revenue has been mostly flat over the past five years, increasing from $132.9 million in 2016 to $143.1 million in 2021, or just about 1% annually. The company has not sought to grow through acquisitions, and operating income has been flat as well. In 2021, it sold a Delaware wastewater facility, and, in one of its territories, rates actually decreased in response to the Tax Cuts and Jobs Act of 2017 as the company's tax payments significantly fell after that bill was passed.

The company has been a reliable dividend stock over the years and regularly increases its payout. As of March 2022, Middlesex paid a 1.1% dividend yield. It has a payout ratio of about 60%, meaning that it should be able to easily increase its dividend in the coming years.

Xylem isn't a water utility but a water technology company. It makes a wide range of products to handle the transportation and treatment of water, pumping and heating, and measurement for meters and data analytics.

With a unique business model, Xylem has no single competitor, but it competes against a wide array of companies across its three business segments. It estimates its total served market to be $60 billion in the segments within a larger addressable market of $600 billion in the global water industry.

Historically, Xylem has been solidly profitable, although its profits have fluctuated. Earnings per share peaked in 2018 at $3.03 and fell to $1.41 in 2020, hammered by the decline in revenue and higher expenses. EPS bounced back to $2.35 as it regained momentum in the pandemic recovery.

Xylem has regularly raised its dividend since its IPO in 2011, and it now pays a 1.4% dividend yield.

The Primo Water brand may be best known for its exchangeable water tanks available at big-box stores, but the current Primo Water is the result of beverage company Cott Corporation acquiring Primo Water in March 2020. Cott sold its coffee and tea business and rebranded as Primo Water to become a pure-play water company.

Management is still in the process of repositioning the business following the acquisition. The company announced in November 2021 that it would exit the North American single-use retail bottled water business, which will help increase profitability and reduce its carbon footprint.

Primo Water finished 2021 with 6% revenue growth to $2.07 billion and expects to continue to make acquisitions to drive growth. On an adjusted EBITDA basis, the company's margins are about 20%, and its generally accepted accounting principles (GAAP) profit is closer to breakeven because of its heavy debt burden.

Still, the company is delivering steady growth and offers investors a unique opportunity as a rare pure-play water consumption stock.

Are water stocks right for you?

You might be surprised to learn that a basket of these seven stocks would have easily beaten the S&P 500 index over the past decade. During one of the greatest bull market runs in stock market history, that's an impressive feat for a group of dividend-paying, recession-proof stocks in what's seen as the relatively safe and sleepy utilities industry.

With this track record, diversifying your portfolio with some water stocks looks like a smart move, especially given their position as a possible hedge against climate change.