There are more than 2.6 million miles of pipelines in the U.S. They safely deliver trillions of cubic feet of natural gas to power plants, industrial facilities, homes, and businesses. Billions more gallons of liquid fuels are delivered to refineries, terminals, and refueling stations. Pipelines are vital to keeping the economy supplied with fuel.

Many different types of companies own oil and gas pipelines. Oil and gas producers own pipelines to transport production from wells to refineries and market centers. Utilities will also use pipelines to transport natural gas to their power plants and distribute it to consumers. Meanwhile, many midstream companies focus entirely on owning and operating pipelines and other energy-related infrastructure. They typically are paid a fixed fee to let other energy companies utilize the capacity of their pipeline systems.

One unique aspect of the pipeline sector is that some companies have chosen to structure as master limited partnerships (MLPs) for tax purposes. These entities tend to distribute a large portion of their cash flows to investors, making them more appealing to income investors.

The U.S. pipeline industry's expansion has been under pressure in recent years due to volatile energy prices and environmental concerns. Several pipeline companies canceled new projects, and the Biden administration pulled the plug on the long-delayed Keystone XL pipeline on the president's first day in office. However, with energy prices surging in 2022, it could drive demand for new pipeline capacity in the U.S.

More than 40 publicly traded midstream companies operate pipelines and related energy infrastructure. That gives investors lots of options. Here's a snapshot of some of the top pipeline stocks:

Market cap (short for capitalization) refers to a company's total value. To calculate market cap, simply multiply the share price by the number of shares. It's one way to evaluate how much a company is worth. 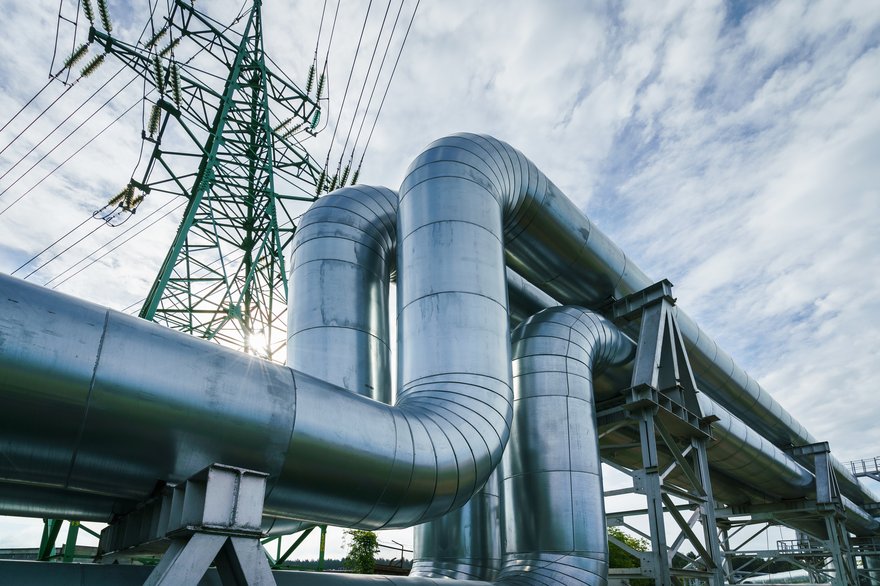 Enbridge operates the world's longest and most complex crude oil and liquids transportation system, moving 30% of all the oil produced in North America. The Canadian energy infrastructure giant also operates natural gas transmission and distribution pipelines, carrying about 20% of all the gas consumed in the U.S. In addition, the company has a growing renewable energy business, highlighted by offshore wind energy facilities in Europe.

Enbridge has a remarkable growth track record. The Dividend Aristocrat delivered its 27th consecutive annual dividend increase in 2022. It should have plenty of power to continue increasing its payout. The company has a top-notch financial profile and a multibillion-dollar backlog of projects under construction and in development. Enbridge estimates that it will boost its cash flow per share at a 5% to 7% annual rate through at least 2024. Although it's a leader in transporting fossil fuels, Enbridge is increasingly investing in cleaner energy sources such as renewables and green hydrogen energy.

Like Enbridge, Enterprise Products Partners has an excellent growth track record. The MLP delivered its 23rd consecutive year of distribution increases in 2022. It also has plenty of fuel to continue growing. The company boasts the highest credit rating in the midstream space. That gives it the financial flexibility to continue expanding by making acquisitions and completing expansion projects.

TC Energy is one of the largest natural gas pipeline companies in North America. It has almost 58,000 miles of pipelines across the U.S., Mexico, and its home country, Canada. Its network delivers 25% of the continent's gas demand. The company also has a large liquids pipeline operation that moves Canadian oil to markets in the U.S. In addition, it has a power and storage business that includes a large-scale nuclear power plant in Canada.

TC Energy has an enormous backlog of expansion projects under construction to increase its natural gas pipeline operations and extend the life of its nuclear power plant. That should give it the means to continue increasing its dividend. TC Energy delivered its 21st consecutive annual dividend raise in 2021 and expects to increase it at a 3% to 5% annual rate in the future.

Kinder Morgan is one of the biggest natural gas pipeline companies in the U.S. It operates the largest natural gas transmission network, with 71,000 miles of pipelines that move more than 40% of the country's gas volume. Kinder Morgan is also the largest independent terminal operator and transporter of refined petroleum products in North America. In addition, it's the leader in transporting carbon dioxide.

The company is increasingly turning its attention to cleaner fuels. It bought a renewable natural gas producer in 2021 and is building several renewable fuel distribution and storage hubs. Kinder Morgan sees a lot of potential to leverage its existing infrastructure to support cleaner energy, including carbon capture and storage and green hydrogen transportation.

Williams Companies is also a large-scale natural gas pipeline company. It owns and operates more than 30,000 miles of pipelines that handle about 30% of all the gas used in the U.S. each day.

Williams has a large pipeline of natural gas expansion projects that should fuel growth in the coming years. These projects will move more gas to power generation facilities, liquefied natural gas (LNG) export terminals, and industrial facilities. In addition, the company is investing in lower-carbon energy opportunities. It's using solar energy to power its operations while exploring renewable natural gas, carbon capture and storage, and hydrogen developments.

Energy Transfer is a serial acquirer. It has made several acquisitions over the years to expand and diversify its operations, including paying $7.2 billion for Enable Midstream in 2021. In addition, the company has spent billions of dollars on expansion projects. Although most of those expansions have supported the movement of fossil fuels, Energy Transfer is increasingly looking at projects aimed at lower-carbon energy sources.

ONEOK is one of the largest integrated NGL services providers. It has a large NGL pipeline operation, natural gas and NGL processing plants, and natural gas pipelines. Overall, it has 40,000 miles of pipelines, which handle more than 10% of gas produced in the country each day.

The company is in the early stages of evaluating energy transformation opportunities. Although it already transports renewable natural gas, ONEOK is also pursuing carbon capture and storage and hydrogen opportunities.

Pipeline companies tend to generate very steady cash flow. They earn fees as oil and gas flow through their systems. That gives them the funds to pay attractive dividends and invest in expanding their operations. Because of that, pipeline stocks tend to be great options for investors seeking to generate some passive income.

Natural gas must be liquefied to travel long distances. These companies are getting it done.

Clean energy is the future, and these companies are leading the way.

Carrying everything from water to natural gas, companies here can be a low-risk investment.