Here are some of our favorite bank stocks for both income and growth.

Banking is a cyclical industry, and anyone who has invested through multiple economic downturns is likely well aware of that. That cyclicality is exacerbated by banks' needs to use immense leverage to earn profits. Because banks lend out 90% of the cash received from depositors, their businesses are highly vulnerable to market cycles. Banks' practices both drive, and can be impacted by, boom-and-bust cycles, and not all bank stocks pay dividends in both good times and bad.

But dividend investors shouldn't disregard the banking industry completely. Well-run banks can and do deliver strong and reliable dividends. 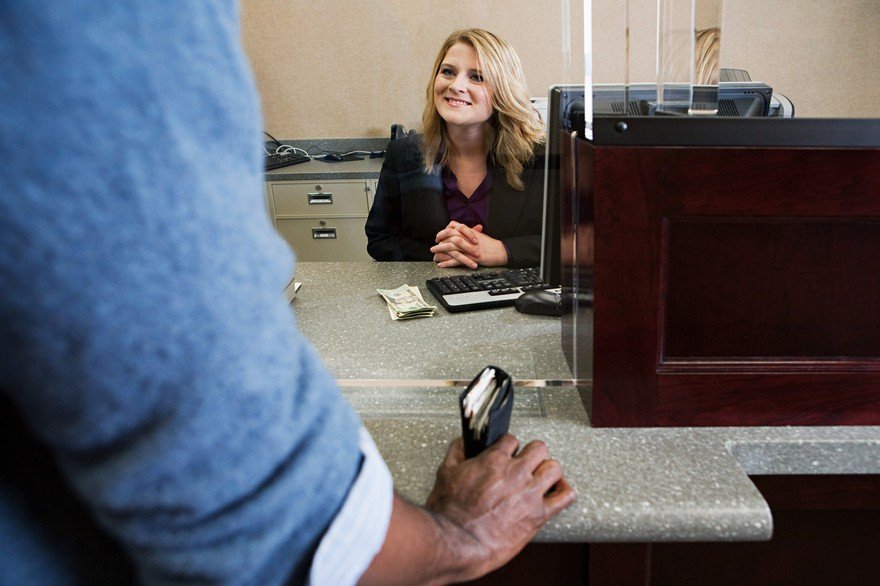 Here are five top dividend-paying bank stocks to add to your watch list.

American Express probably doesn't come to mind for many investors as being a bank, or its stock as being a great dividend stock. The company is much better known as a provider of credit and debit cards. But while competitors Visa (NYSE:V) and Mastercard (NYSE:MA) operate open payment networks by partnering with banks to issue payment cards and lend money, the American Express payment network is closed, meaning it is both a payment network operator and a lender. The U.S. Federal Reserve considers it a bank holding company.

American Express makes this list of best dividend-paying bank stocks because it has a long track record of delivering robust returns, in part because its dividend is both generous and reliable. The returns delivered by American Express over the past three decades have dwarfed those of the broader market, as the chart below demonstrates: 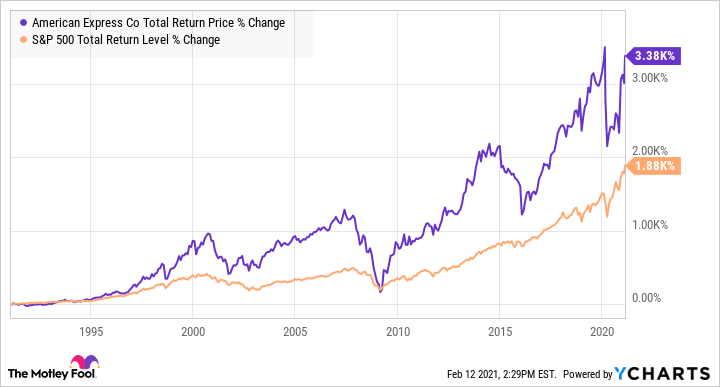 Perhaps surprisingly, American Express' dividend yield (equal to the dividend paid divided by the stock price) during much of its history has been less than 2%. But the consistent and massive rise in the value of its stock has meant that the absolute value of its dividend has steadily increased, and likely will continue to increase, in the years ahead.

The chart below displays the historical performance of the American Express dividend, both in absolute value and as a percent of the stock price: 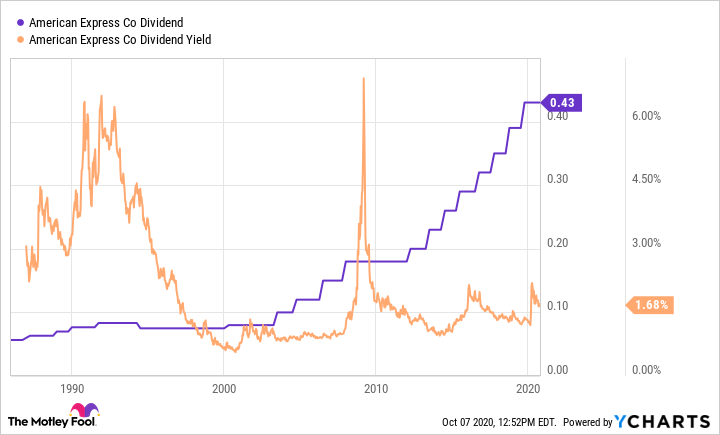 The future looks bright for American Express. The growth of the global middle class, along with the worldwide transition away from cash and to digital payments, creates favorable conditions for American Express to continue to thrive. The company is likely to keep outperforming the market and reward investors with attractive dividends.

A decade ago, Bank of America was one of the most hated banks in the U.S. During and in the years following the 2008 global financial crisis, few companies were as closely associated with questionable lending practices, predatory lending, and outright deception as this megabank and its subsidiaries. But fast-forward to today, and after paying tens of billions of dollars in fines and legal settlements, Bank of America under CEO Brian Moynihan (who took the helm in 2010) has transformed into one of the best big banks.

Prior to Moynihan becoming chief executive, Bank of America had become bloated and disorganized following multiple high-profile acquisitions (that were also the source of many of the company's legal and regulatory problems). But the company has since immensely improved its lending standards and customer service and become a leader in digital banking. Its online banking platform is now rated one of the best.

Bank of America has regularly increased its dividend payment since 2014, and its recent dividend yield of 2.2% exceeds the average dividend yield of S&P 500 stocks. Bank of America is both fully focused on, and helping to create, the future of banking. It also has a strong balance sheet and ready access to low-cost capital. It should be considered favorably by any dividend-focused investor.

While Bank of America is a household name, many investors may not have heard of Butterfield before. Instead of catering to Main Street America, Butterfield is an offshore bank that serves high-wealth individuals. It has physical locations in Bermuda, the Cayman Islands, and the Channel Islands near Europe. The Butterfield brand is one of the oldest in offshore banking, with a history that goes back more than a century. It only became a public company in 2016.

Dividend investors should know two important things about Butterfield. First, serving high-wealth individuals and those with international banking needs is a typically profitable business. The international elite are growing in number, and Butterfield is well positioned to provide high-end banking services and privacy that align with its clients' expectations for an offshore bank.

Second, while Butterfield is not collecting much interest income in the current economic climate, it is maintaining its profitability over that of most competitors by collecting an increasing amount of fee income from customers. Butterfield's business model is likely to continue turning a profit regardless of the movements of interest rates.

Using recent stock prices, Butterfield's dividend yield is 5.4%, the highest on this list. While Butterfield's dividend is generally reliable, the company's payout ratio (equal to the dividend paid as a percentage of profits) remains below 50%, which is healthy if slightly low for dividend-focused investors. Payout ratio included, investing in Butterfield is still a great way both to gain concentrated exposure to offshore banking and collect dividends from a high-yield stock.

Like Bank of America, JPMorgan Chase is another of the "Big Four" U.S. megabanks. Ranking as the nation's largest bank by asset value, the financial institution has delivered strong returns to investors since emerging from the 2008 financial crisis. And, despite the coronavirus pandemic severely impacting the performances of bank stocks, JPMorgan Chase's stock has still outperformed the S&P 500 over the past decade -- as depicted by the chart below: 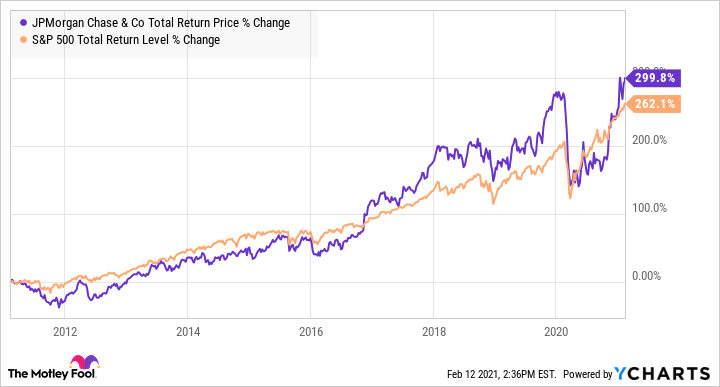 Since the end of the 2008 financial crisis, JPMorgan Chase has increased its dividend 17-fold, which has played a significant role in the outperformance charted above. Management and the company's board of directors have been increasingly prioritizing the return of profits to investors for many years.

At the time of this writing, JPMorgan's per-share dividend equals 2.6% of its stock price, and its total dividend amounts to substantially less than one-third of its profits. While the 2.6% dividend yield is relatively high for the company based on its historical performance, the payout ratio remains very low. This dividend strategy is intentional, and CEO Jamie Dimon has recently described the company's dividend as "completely sustainable." As depicted by the chart below, JPMorgan Chase's dividend yield and payout ratio have each grown over time: 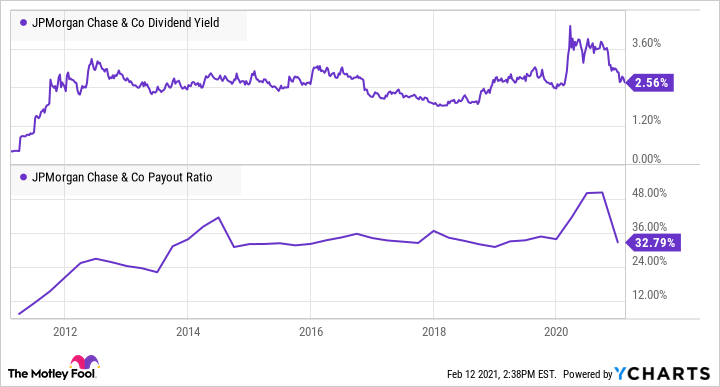 Investing in JPMorgan stock carries some risk, of course. A protracted economic downturn and the ultra-low interest rate environment could negatively affect the bank's profitability, and regulators could force it, along with its big-bank peers, to hold more capital in reserve -- which might compel the company to reduce its dividend. But, with an immensely strong balance sheet and low-cost access to a large amount of capital, any short-term challenges that may arise are not likely to have significant lasting effects. At every point in the cyclical banking cycle, JPMorgan Chase stock is likely to remain attractive to dividend investors.

For those who live in New England or New York, People's United might be a familiar name. Investors everywhere should be interested to know that People's United is the only bank that is a Dividend Aristocrat, meaning it has increased its regular dividend every year for more than 25 years (28 years, to be exact). While many of the bank's regional competitors, and essentially all of the largest banks, have reduced their dividends during economic downturns, People's United has been consistently raising its dividend.

As indicated by the chart below, People's United stock over the past quarter-century has outperformed the S&P 500 by roughly a factor of two: 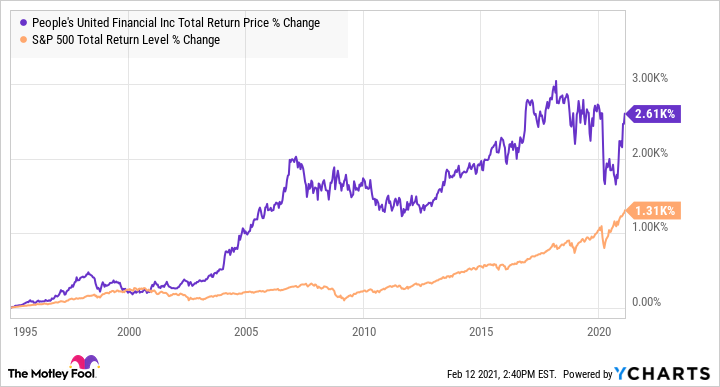 The superior performance of People's United can be partly attributed to excellent risk management. Facing the prospect of a large number of debt defaults during the 2020 economic downturn, the bank in the first half of last year was obligated by regulators to set aside additional cash to cover potentially large loan losses. Rather than reduce its dividend to provision the needed liquidity, the bank proactively pursued a strategy to generate additional cash by other means. Most notably, People's United in September 2020 sold its noncore insurance brokerage for $120 million to bolster the bank's balance sheet and refocus its business on banking services.

At the time of this writing, People's United is paying a dividend yield of 4.8%, which ranks as one of the highest in the banking industry. The bank's dividend does not appear to be at risk, and with its history of lending conservatively and expertly navigating economic downturns, People's United is likely to remain a rarity in the banking sector: a dividend stock with staying power.

While the banking industry can be highly cyclical, the top banks are generally resilient and almost always reward patient investors. Dividend-paying companies, even those operating in cyclical industries, are well positioned to produce enormous long-term gains for their investors. Even considering the risks, you can likely boost your portfolio's overall returns by including some of these top dividend-paying bank stocks in your dividend stocks portfolio.

Banks may seem complicated, but the way they make money is pretty straightforward.

These companies pay their shareholders regularly, making them good sources of income.

Are Bank Stocks Safe? The Pros and Cons

The bank itself is a safe place to put your money. But what about bank stocks?

Why SoFi, Janus Henderson, and Enova International Are Rising Today