For pharmaceutical companies hoping to win regulatory approval for a drug, time really does mean money. The longer it takes for the U.S. Food and Drug Administration (FDA) to make an approval decision, the longer it is before a drugmaker can begin making money to recover the cost of its investment to develop the therapy.

The good news for these companies, and their investors, is that the FDA has a clear process in place with an established timeline for making decisions. That process exists thanks to the Prescription Drug User Fee Act (PDUFA), which the U.S. Congress passed in 1992. The PDUFA must be reauthorized by Congress every five years.

The PDUFA's primary goal was to authorize the FDA to collect fees from drugmakers to help pay for the FDA staff needed to review regulatory filings for drugs. But the pharmaceutical industry objected to paying money to the FDA without anything guaranteed in return. The PDUFA helps the FDA by providing the agency with a way to generate money and establishes a set timeline for the agency to make approval decisions. 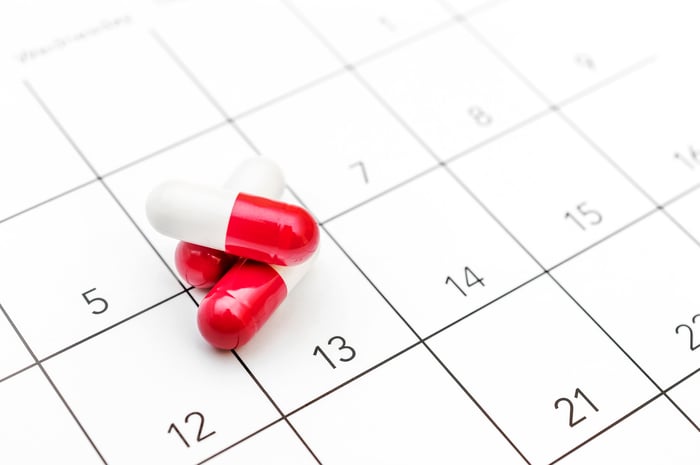 What is a PDUFA date?

Once the FDA accepts a filing for the approval of a drug, the agency must complete its review process within 10 months in most cases. The date at the end of the review period is referred to as the PDUFA date.

In some instances, the FDA grants Priority Review status to the regulatory filing for a drug. This designation is given to therapies that, if approved, would significantly improve the safety or effectiveness of the treatment, diagnosis, or prevention of serious diseases. When the FDA grants Priority Review for a drug, the PDUFA data is six months from the acceptance of the submission.

While PDUFA dates are set after a regulatory filing is accepted, the dates aren't set in stone. The FDA does occasionally extend the review period, most commonly when additional data is required from the drugmaker or the company itself submits additional data that requires more time to review.

History of the PDUFA date

Prior to 1992, the FDA didn't have to make approval decisions within a specified period. This caused frustration for drugmakers, along with physicians and patients hoping for new treatments.

The FDA, too, knew that it had a problem with speed. The agency also needed additional money to pay for extra staff to expedite the review process for regulatory filings.

The PDUFA served as a compromise between the pharmaceutical industry and the U.S. government. Although drugmakers had previously been reluctant to pay increased fees to the FDA, they went along with the idea in exchange for faster drug approval times. Through the years, the pharmaceutical industry began to champion PDUFA reauthorization and the process for establishing PDUFA dates.

The FDA doesn't publish an official list containing all of the outstanding PDUFA dates for drugs under review. However, many drugmakers announce when they receive a PDUFA date from the agency for one of their drugs. Such announcements can be major catalysts, especially for small pharmaceutical, vaccine, or biotech stocks. Some websites maintain calendars that track PDUFA dates for all pending FDA approval decisions.