Invest in the businesses that operate the massive vessels that make global trade possible.

The normally under-the-radar world of shipping stocks has been thrust into the spotlight since the COVID-19 pandemic as investors have gotten a first-hand look at how essential marine shipping is to the global economy.

The pandemic brought normal supply chains to a halt, leaving a lot of the world's deep-sea cargo ships and containers out of position to handle a massive surge in demand as consumers -- housebound and no longer able to spend on experiences -- gobbled up goods instead.

Even as the pandemic (hopefully) recedes, the conflict in Ukraine threatens to further disrupt global shipping channels and cause cargo to be rerouted.

For investors, all this disruption can create opportunities. We've all seen how critical shipping stocks are to the global economy. Global trade value hit $28.5 trillion in 2021, and much of that cargo was transported via publicly traded companies. 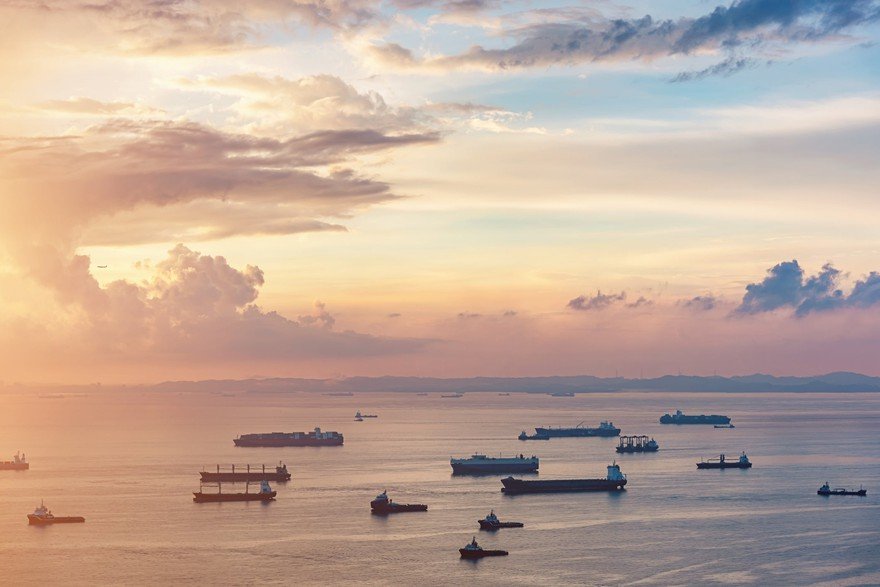 There's risk to venturing in these waters, however. Shipping stocks are notoriously cyclical, and companies can get in trouble during downturns due to the leverage that many add to build their fleets. The post-pandemic surge in demand has also caused demand for these stocks to spike, with many in the industry today trading at market caps double what they were just a few years ago.

Investors interested in shipping stocks should focus on the best-run companies with a proven track record or a competitive advantage to avoid being capsized by unexpectedly rough seas.

A.P. Moller Maersk, typically referred to as Maersk, is the largest publicly traded shipping company in the world. The Netherlands-based company has operations spanning the globe, and the company is engaged in many different facets of the transportation industry, including shipping, port terminal operations, and supply chain management.

Its shipping business operates a fleet of more than 700 vessels, including a number of massive ships that can hold 18,000 containers each. Its terminal business has a presence in some of the world's largest ports such as Rotterdam, Los Angeles, Shanghai, and Singapore.

Maersk's size and scale makes it more resilient throughout the business cycle, and it gives the company the resources to invest in future technology and innovation. For more than a decade, Maersk has been experimenting with eco-friendly options such as algae biofuel. The company is also a leader in digital warehousing and distribution tech, including the use of artificial intelligence to streamline cargo flows and make the overall operation more efficient.

Matson's history dates back to the late 1800s when the company was formed to provide a link between the U.S. West Coast and Hawaii. Today, it remains one of the primary transporters of goods to U.S. Pacific territories and Alaska. It also offers premium, expedited service between the U.S. mainland and China.

Matson is one of the more diversified companies on this list in terms of types of ships, with a fleet of more than a dozen vessels, including container ships, custom-designed barges, and combination container and vessels designed to carry wheeled cargo such as cars, trucks, and even railroad cars. Matson also operates a logistics arm that works with customers to help route shipments.

With Matson, investors get a stock that has exposure both to the global shipping boom and to the reliable business of ferrying freight to U.S. markets where water (and not highways) is the most effective means of transportation.

Star Bulk is a Greek shipping line that trades in the U.S. and operates a fleet of 128 dry bulk vessels. The company's fleet of massive ships transports grains, fertilizers, minerals, and steel products around the world.

In shipping, the best companies tend to differentiate themselves by the quality of their fleets, including the age of their ships. Newer vessels tend to require less maintenance and typically are more fuel-efficient than older ships. Star Bulk operates three sizes of vessels with an average age of less than 10 years, making it one of the most cost-efficient dry bulk operators on the planet.

Star Bulk has also wisely invested the windfall from soaring demand to help it prepare for the next downturn. The company is on pace in 2022 to reduce its net debt by 43% since 2019, while more than tripling cash and liquidity.

Textainer doesn't own ships or manage ports, but the company is one of the world's largest owners of those ubiquitous 20- and 40-foot containers that carry goods from the factory to the showroom. The containers are the backbone of "intermodal" transportation -- transport that involves a combination of ships, trucks, and railroads.

Textainer owns more than 4 million containers and leases them to shipping and manufacturing partners. In times of strong demand, it can charge a lot more for its containers. This can be a boom/bust business at times, but with most of Textainer's portfolio of containers on long-term leases, the company is able to even out some of the business cycle. It also means that renewals during times of strong demand can contribute to earnings well after peak demand periods are over.

There are competitors in the container lease business, but Textainer is well-positioned to continue to be a market leader, thanks to a $1.1 billion backlog of new container orders. The company in some ways operates more like a bank than a typical shipping company by using debt to buy assets and then leasing those assets to cover the borrowing costs and make a profit. But for an investor interested in exposure to global trade without having to pick and choose from individual operators, Textainer offers an interesting opportunity.

Global Ship Lease is to ships what Textainer is to containers. The British-based company owns a fleet of 65 container ships that it charters to operators under long-term, fixed-rate charters. The company is set up to provide the extra capacity large shippers need when times are good, and Global Ship has seen strong demand for its services during the post-pandemic rally.

Earlier in the pandemic, when there was a lot more uncertainty, Global Ship expanded its fleet by about 50% by acquiring 23 ships in what was then a buyer's market. The ships generated more than $1 billion in EBITDA in their first year of ownership, primarily via leases with large operators such as Maersk.

This is a business that can be more exposed to cycles than a normal shipper since operators will use their wholly owned assets before they turn to leased ships when demand isn't strong. But if Global Ship Lease can acquire ships at good prices, it can perform in any environment, and its dividend yield of more than 3% makes it a good choice for income-focused investors.

These companies can help your portfolio get where you want it to go.

Genco is a dry bulk operator with a fleet of more than 40 ships focused on transporting commodities around the globe. The company works closely with its customers, providing an in-house commercial operating platform to help manage shipments of iron ore, grain, steel, cement, and other dry goods.

For years, Genco had the reputation of an underperformer, but management is slowly making progress in convincing investors it is on the rise. In early 2021, Genco announced a plan to pay down its debt and focus on returning cash to shareholders. The company reduced its total debt by about 45% in 2021 alone.

Keeping the dividend strong while still expanding its fleet and managing debt is a challenge, but Genco today is one of the best dividend stocks in shipping, with a yield north of 10% at the time of this writing. For investors who believe in the turnaround, Genco could be an attractive, although a bit more speculative, investment.

Are shipping stocks right for you?

Marine shippers operate massive vessels that aren't capable of going nearly as fast as the speedboats some people take out on weekends, but those large boats are also much less likely to capsize if they hit a big wave. That can be a good way to think about these stocks as well.

You are unlikely to get the sort of sustained, multi-year, spectacular returns from shippers that investors attempt to find with tech stocks, but there is also a much more stable underlying business with a multi-decade track record and a resilience through the business cycle. These stocks are the ballast, not the speedboat.

For those seeking a diversified portfolio, shipping stocks can offer both stability and income that will help keep you afloat at times when more high-flying sectors of the economy run into a patch of rough water.

Used Car Prices Are Plunging: 1 Under-the-Radar Stock That Could Benefit

Why Freyr Battery Is Tumbling 15% This Week