Copper demand is on track to double by 2030, driven by the transition to a renewables-based economy. Copper is a crucial metal for the electrification of the transportation sector and renewable energy sources.

This outlook bodes well for the copper industry. It suggests that copper prices could be much higher in the coming years. Here's a closer look at some of the top copper stocks that could benefit from the transition. 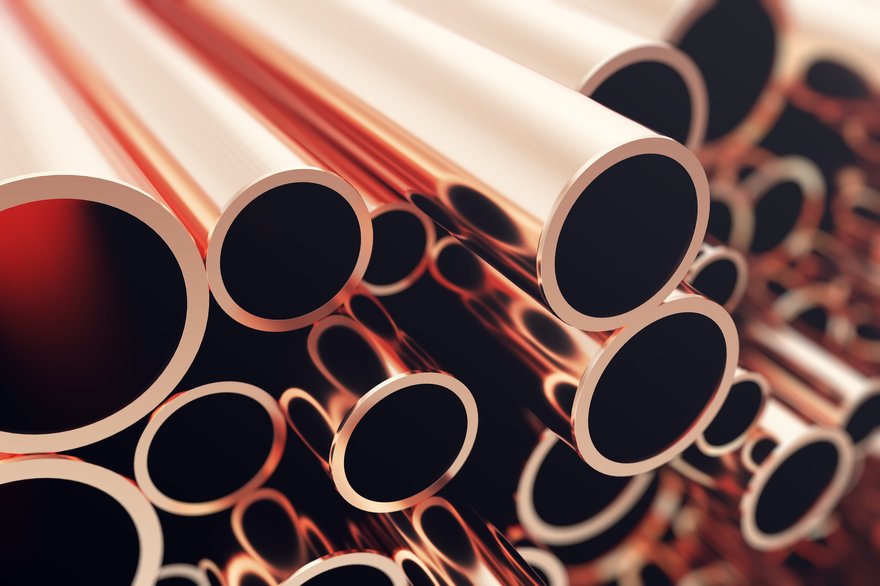 Copper is the third most-consumed industrial metal in the world behind iron ore and aluminum, according to the U.S. Geological Survey. Because of its importance to the economy, many mining companies operate copper mines.

However, while many companies produce copper, only a few can expand their copper production because they have reserves and viable expansion projects. The reserves and projects position them to capitalize on the industry's growth. Top copper stocks include:

BHP Group is a leading global natural resource producer based in Australia. It mines copper, iron ore, nickel, metallurgical coal, and potash. It was also a large oil and natural gas producer but merged operations with Woodside Petroleum (ASX:WPL) in 2022.

BHP operates several copper mines in Chile and one in Australia. Its business produced 1.6 million tons of copper in 2021. It's investing heavily to expand its copper production to meet growing demand.

BHP completed an expansion of its Spence copper mine in the Chilean desert at the end of 2020. The project will add 185,000 metric tons of production annually over the next decade and extend the mine’s life for 50 years. BHP has also secured several long-term exploration partnerships and early-stage growth opportunities to help meet the projected increase in copper demand in the coming years.

The company's growing copper production should support higher dividend payments. BHP aims for a minimum dividend payout ratio of 50% of its cash flow. It often pays out additional dividends from its excess cash and repurchases shares.

Freeport-McMoRan is one of the world's largest publicly traded copper producers. It also produces gold and molybdenum, an element used in high-strength steel alloys.

The crown jewel of Freeport's portfolio is the Grasberg mine in Indonesia, one of the world's largest single copper and gold sources. Freeport also operates large-scale mines in Arizona and Peru. The company produced 3.8 million pounds of copper in 2021.

Freeport completed a ramp-up of underground mining activities at Grasberg at the end of 2021. The project added 1.5 million pounds of annual copper production capacity and the ability to extract 1.6 million ounces of gold each year. The company has several other longer-term growth drivers, including expansions in Arizona and Chile.

The mining company's growing copper production should support increasing cash returns to shareholders. Freeport has set a framework to use as much as 50% of its excess cash flow for shareholder returns, including dividends and share repurchases.

Teck Resources is a diversified mining company based in Canada. It produces copper, zinc, and steelmaking coal. In addition, it has investments in oil sands mining projects.

Teck Resource expects to deliver industry-leading copper production growth in the coming years. It's on track to more than double its output by 2023. The main driver is its Quebrada Blanca Phase 2 (QB2) project in northern Chile, one of the world’s largest copper sources. The project is expected to begin production in the second half of 2022.

In addition to QB2, Teck has several other copper growth projects in the pipeline to help meet future global copper demand. It could increase its copper output by five-fold over the next decade as it continues expanding its mining capacity.

Teck expects QB2 to drive significant earnings growth, positioning the company to return more cash to shareholders via dividends and share buybacks. It plans to return 30% to 100% of its available cash flow to investors once QB2 comes online.

Southern Copper is one of the largest integrated copper producers in the world. It operates copper mines in Mexico and Peru. The company is majority-owned by Grupo Mexico (OTC:GMBXF), a conglomerate focused on mining, transportation, and infrastructure.

Southern Copper is currently the fifth-largest copper producer in the world. In addition, it holds the biggest copper reserves, providing it with ample opportunity to expand its copper output.

In the near term, the company expects its production to decline as legacy reserves deplete. However, output should bottom out in 2022. Over the longer term, Southern Copper sees significant production growth. By 2030, it anticipates increasing production 73% from its 2020 level. The company has approved several large-scale expansion projects that should drive long-term copper growth. It expects to invest an average of $1.9 billion annually over the coming decade to increase its copper production.

Even with increased investments, Southern Copper aims to continue paying out a sizable portion of its earnings via dividends.

Rio Tinto offered to acquire the shares of Turquoise Hill it doesn’t already own for $2.7 billion in cash in early 2022, which would give it full control over developing the underground mining project. The acquisition would significantly increase its copper production. By 2030, Oyu Tolgoi should be the world's fourth-largest copper mine.

Rio Tinto has several copper-related growth projects in the pipeline, including Resolution Copper in the U.S. and Winu in Australia. Discovered in 2020, the Winu copper and gold resource has the potential to become a large-scale mining operation.

Rio Tinto's growing copper production should enable it to continue paying attractive dividends. The company aims to return 40% to 60% of its earnings to investors via dividends each year.

Mining companies find and extract materials and minerals. Can you dig it for your portfolio?

A closer look at this subgroup of the basic materials sector and some of the best metals stocks to invest in.

This safe-haven metal can be a precious investment.

This precious metal is widely used in industrial applications.

The world needs more copper to support its transition to lower-carbon renewable energy. Demand for the metal should rise considerably in the coming years. The increased demand should support additional copper expansion projects from the world's top mining companies, allowing them to increase production and capitalize on higher prices.

The combination of rising production and prices should enable copper miners to increase their cash flow, providing more money to pay dividends, repurchase shares, and boost total returns. The upside potential makes the copper industry an attractive one for investors to consider.

Calculated by average return of all stock recommendations since inception of the Stock Advisor service in February of 2002. Returns as of 12/10/2022.