Most investors view blue chip stocks as an elite group. They're the best-known, best-established, and best-capitalized publicly traded companies in the world. Because of that, they should have no problem enduring an inevitable economic downturn. Thus, many investors view blue chip stocks as being among the safest investment options in the stock market.

However, that might be a bit of a misconception because safety can mean different things to different investors. Here's a look at how most investors define that term and how this relates to the way we generally view blue chip stocks. 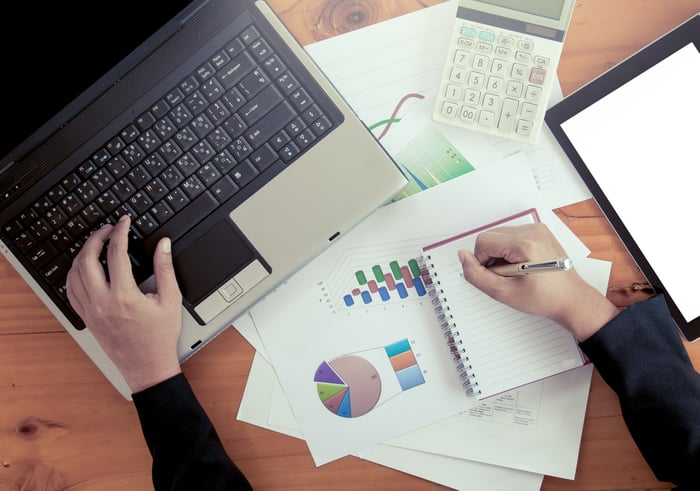 What is a safe stock?

Investors don't always agree on the definition of a safe stock. Some hold them to a high standard, deeming stocks safe if they are unlikely to lose much value during a market sell-off. Meanwhile, those focused on income would define a safe stock as one unlikely to reduce or suspend its dividend even during a deep economic downturn.

However, generally speaking, most investors would define a safe stock as one that's unlikely to produce a permanent investment loss. For example, it has the financial means to weather a significant economic or business shock without needing to sell a considerable amount of equity or assets at the bottom of the market cycle to survive. Thus, while its share price might decline during the turmoil, it stands a good chance of rebounding in the eventual recovery.

How to measure a stock's safety

One factor that increases the probability that a company won't suffer a permanent loss is good capitalization. Good indicators include a large market capitalization -- typically more than $100 billion for a blue chip -- and a strong balance sheet (usually marked by an investment-grade bond rating).

Investors see companies with a large market cap as safer because their shares usually have lots of market liquidity, meaning a significant dollar value regularly changes hands on a major exchange. That typically prevents a dramatic share price decline during periods of market turmoil when there are fewer buyers and sellers. Another reason large market capitalization stocks are safer is that they can more easily sell shares when they need to raise cash without significantly diluting existing investors. For example, a $1 billion stock sale from a $100 billion company would dilute existing investors by only 1%, whereas it would be 10% dilutive for a company with a $10 billion market cap.

Meanwhile, bond ratings can help investors gauge safety because they evaluate a company's ability to repay its debt and meet its financial commitments. For example, companies with A-rated credit have a strong ability to meet their financial commitments. Meanwhile, companies in the BBB range -- the last investment-grade grouping -- have an adequate ability to meet their financial obligations. Because of that, deteriorating economic conditions or changing circumstances could weaken the B group's financial capacity, especially those at the very bottom level of investment grade (Baa3/BBB-).

Given this differentiator, most investors would consider stocks with A-rated credit the safest and those in the BBB group relatively safe. Meanwhile, anything below that investment-grade line is not a safe investment.

Are all blue chip stocks safe?

History has proven this to be true. For example, before the financial crisis, many investors considered venerable investment bank Lehman Brothers and iconic automaker General Motors (NYSE:GM) to be blue chip stocks. They were well known, well established, and well capitalized at their peaks, but their financial situations deteriorated rapidly when the global economy went into turmoil, which ultimately caused both to file for bankruptcy, causing a permanent loss for investors. Likewise, investors once considered Enron a blue chip stock, but it, too, collapsed, causing irreparable damage to its investors. Meanwhile, in more recent years, General Electric (NYSE:GE) has gone from being among the bluest of blue chips as a member of the Dow Jones Industrial Average to being a shadow of its former self because of financial issues. While the industrial giant hasn't filed for bankruptcy, its financial struggles forced it to sell several businesses to pay down debt, which has permanently impaired its value.

Given that history, investors shouldn't automatically assume all blue chip stocks are completely safe. As a rule, however, they do tend to be safer than most other stock market investments.

Safe is a relative term

No investment is without risk. Blue chip stocks are usually less risky and thus considered safer than other stock-based investment options. That's because one of the major determining factors of a blue chip stock is that it must be a well-capitalized company, meaning it should have the financial fortitude to endure an inevitable economic downturn.