Investors seeking a balance of lower risk and steady returns should look at blue chip stocks that pay dividends. Let's take a closer look at these stocks that offer the best of both worlds. They're stalwart companies that meet the blue chip standard and pay a strong dividend to deliver the best returns. 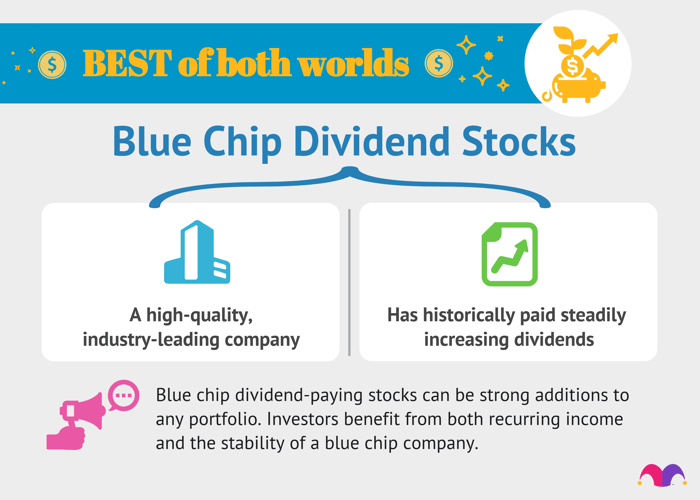 A broad definition of a blue chip stock is a well-known, high-quality company that's considered a leader in its industry. The "blue chip" descriptor comes from the game of poker, in which blue chips have the highest dollar value.

Not every blue chip stock pays a dividend. Younger companies, such as Amazon (NASDAQ:AMZN), still have plenty of valuable opportunities to invest profits back into their business to accelerate growth. Others, such as Berkshire Hathaway (NYSE:BRK.A)(NYSE:BRK.B), have proven track records of earning high returns by reinvesting their company's profits, and with share repurchase programs.

But many of the best blue chip companies are also those that pay dividends. Some are Dividend Aristocrats, meaning that they have increased their dividends consistently for at least 25 consecutive years and are part of the S&P 500 index. Other blue chip companies are Dividend Kings, which have increased their dividends for 50 years or more.

Regardless of whether a blue chip stock has a rapidly growing dividend, the combination of blue chip status and dividend payments can be rewarding for investors.

Let's take a close look at some of the top blue chip dividend stocks:

Apple investors have enjoyed immense returns during the past two decades as the company has risen to become one of the biggest and most profitable in the world. Apple's powerful brand makes it the most lucrative consumer electronics provider and one of the most reliable companies to own for the long term.

The foundation of Apple's success is the iPhone, which has enormous user loyalty and generates more than half of Apple's sales. Much of the company's growth in services is derived from its massive iPhone user base since customers use their smartphones to stream music and movies, play video games, store data, and access media content from thousands of third-party publishers in the App Store.

Apple is also in an enviable position going forward. The deployment of 5G mobile networks in many markets is likely to boost sales of the iPhone, which made its debut with a 5G chip in late 2020 with the iPhone 12. 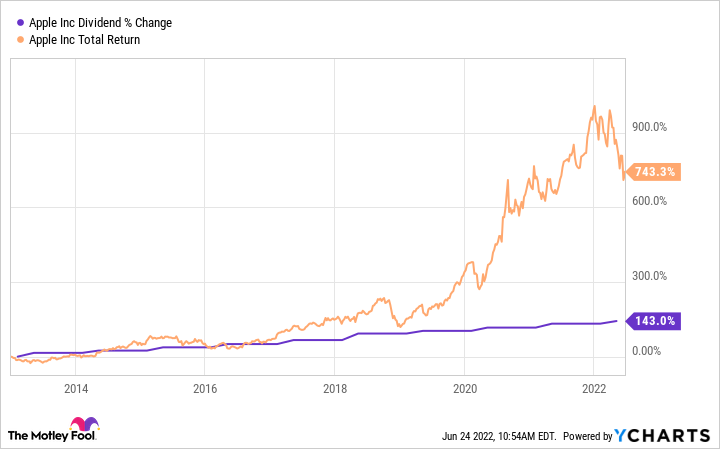 Apple's gradual growth, paired with its increasing dividend payout, is an attractive combination. The stock's dividend yield may be somewhat low, but the company's dividend payout comprises less than 20% of Apple's cash flows, meaning that continued dividend growth is likely. Apple has been raising its dividend every year since it was instituted in 2013. When looking for blue chip stocks that dole out regular and rising income, Apple is a top choice.

Payment processing giant Mastercard is a blue chip company in the digital payments space. As one of the most recognizable global names in electronic payments, Mastercard has competitive advantages that enable it to maintain its dominant marketplace position. It partners with banks and other lenders that want to issue cards to their customers and simply collects a small fee every time a transaction is processed using its network.

With another billion people set to join the global consumer class over the next decade, Mastercard still has plenty of opportunities to expand its payment processing network. Along the way, it's increased the cash it returns to shareholders by a dramatic amount. 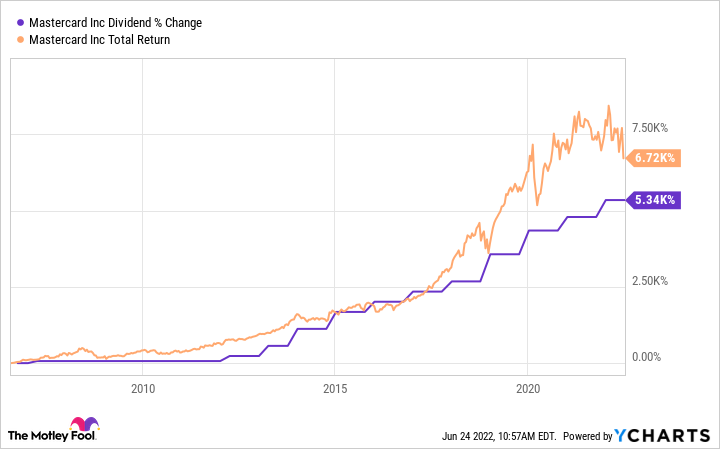 Mastercard is ignored by many dividend investors for the simple reason that the dividend yield is low -- only around 0.6% at the time of this writing. However, the company boasts a remarkable record of expanding its dividend payout, raising the dividend more than 5,300% since paying its first dividend.

Broadcom isn't exactly a household name among semiconductor companies, but the company designs parts for a wide range of items from smartphones to mobile network equipment to data center hardware. In a world in which technology is growing in importance, Broadcom's chips are an absolute staple.

Broadcom dedicates billions of dollars to research and development every year, so the importance of its products isn't likely to fade anytime soon. Additionally, the company has not been shy about spending money, most-recently into more software products. In May of 2022, it reached a huge $61 billion deal to buy VMWare, further expanding its reach into software to augment its core semiconductors business. As a result, Broadcom is one of the most profitable names in the semiconductor industry.

Management's target is to return half of the previous year's free cash flow to shareholders via its dividend, which has equated to fantastic income increases for owners of this tech stock. 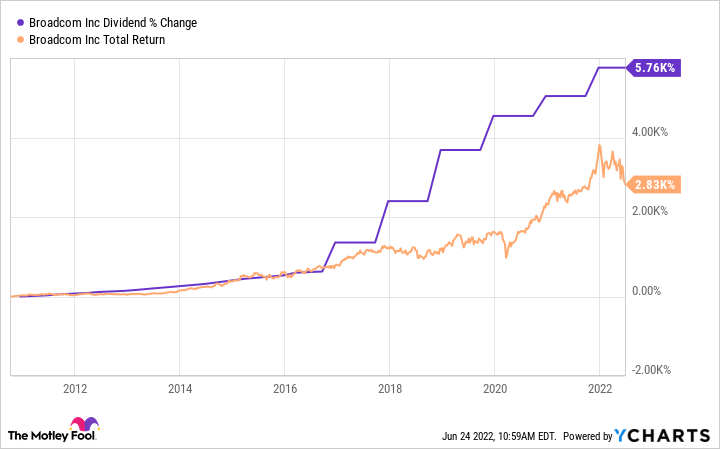 One of the most powerful and recognizable brands in the world, Nike has been a blue chip stock for decades. Clothing bearing the Nike "swoosh" logo is sought after by consumers around the globe. With the global middle class growing rapidly, Nike is the elite brand in athletic footwear and apparel. Even the COVID-19 pandemic only put a temporary drag on Nike's upward momentum since spending on the company's products recovered quickly. 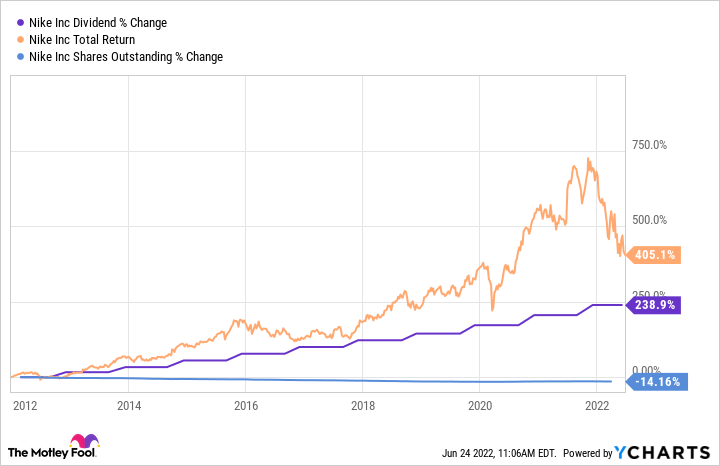 Nike's brand power -- and the pricing power that comes with it -- makes the company a true blue chip. In the third quarter of its 2022 fiscal year, Nike reported year-over-year digital sales growth of 19%, which was an impressive feat considering the company's massive scale. Nike is targeting half of total revenue to come from online and direct-to-consumer sales within the next couple years.

This increasingly efficient distribution model is likely to enable the company to continue to raise its dividend payout. Nike's dividend yield is currently low compared to other companies, but it has a long history of annual payout increases.

NextEra Energy isn't your typical utility stock. The company is a growing producer of energy -- much of it generated by renewable sources -- that it sells and transfers to utility companies in other markets. The steady demand for electricity that underpins its business, combined with growth in demand for renewable energy, gives NextEra a premium valuation and blue chip status.

NextEra is one of the largest utility companies in the U.S. and among the largest producers of renewable energy in the world. The company benefits partly from being headquartered in Florida, one of the fastest-growing states in both population and business development. 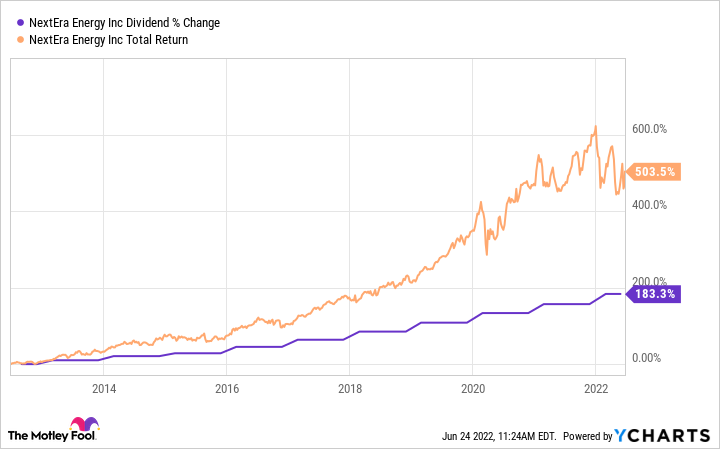 NextEra's share price has appreciated by triple-digit percentages over the past 10 years, among the best results of any utility company. While the NextEra's dividend yield is comparatively low for its peer group, that's a reflection of the company's premium stock price and shareholders' expectations that the company will continue to thrive in the years ahead, as it has for so many years gone by.