Blue chip stocks are an elite group. They are the most stable, profitable, and enduring companies, which generally makes them among the safest investments and, like a blue chip in poker, highly valuable to investors. Blue chips are generally considered the best-known, most established, and best-capitalized companies in the world.

Here's a look at how many companies are in this elite group. 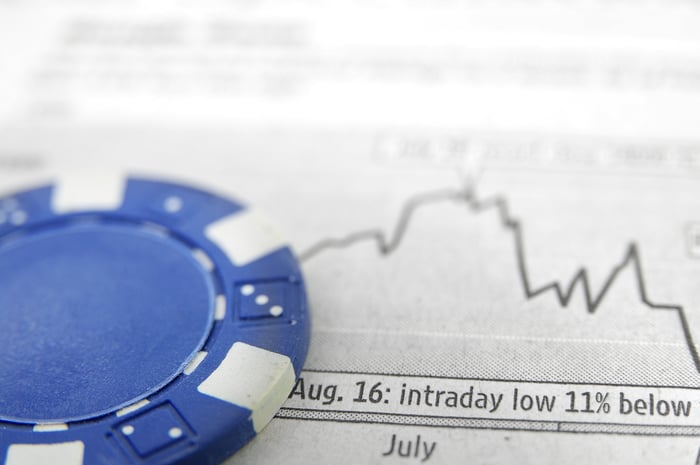 How many blue chip stocks are there?

However, others use different guidelines to define blue chip stocks more broadly. For example, there are 46 blue chip stocks according to Dogsofthedow.com, which defines a blue chip as a dividend-paying company that either has a stock market capitalization above $150 billion or is a member of the Dow Jones. Here's the current list using those criteria:

Data source: Dogsofthedow.com. Market cap and yield data as of September 29, 2020. (Note: Dow members Disney and Boeing temporarily suspended their dividends in 2020 due to COVID-19.)

Other blue chip lists center around a company's ability to increase its dividend. For example, some investors would label a Dividend Aristocrat (an S&P 500 member with at least 25 consecutive years of rising dividends that also meets certain size and liquidity requirements) as a blue chip stock. However, others might set a higher bar by labeling only dividend kings (companies with 50 or more years of dividend growth) as blue chip stocks. Using dividend growth as the main criterion, there are 65 blue chip stocks per the aristocrat cutoff and only 30 per the higher bar of being a dividend king, as follows:

Blue chip stock or not?

Investors browsing these blue chip stock lists will likely notice some notable omissions. For example, many investors might consider well-known mega-cap stocks like Berkshire Hathaway, Amazon, Alphabet, and Facebook blue chip stocks. However, because they don't pay a dividend, they are disqualified from blue chip status in the eyes of some investors.

Similarly, some investors narrowly define well-established companies as those that have been operating for many decades and aren't likely to be displaced by competitors, broken up by regulators, or disrupted by an unexpected disaster. Because of that, several mega-cap tech companies might be well known and well capitalized (e.g., Tesla and Netflix with their $200 billion+ market caps), but some investors don't view them as well established since they don't have multidecade operating histories.

Meanwhile, some former blue chip stalwarts have fallen off different lists in recent years. For example, the Dow Jones has made changes to its elite 30-member blue chip list 57 times in its 124-year history, most recently in 2020. The index recently replaced Exxon, Pfizer, and Raytheon with Salesforce.com, Amgen, and Honeywell International. The Dow pushed out the former trio because Raytheon had recently merged with United Technologies, while Exxon and Pfizer were a bit redundant since there's already another oil stock (Chevron) and pharmaceutical stock (Merck) on the list. It added the latter trio to increase its exposure to technology stocks, add a biotech stock, and bring back a former long-standing Dow stock, respectively. As that reasoning shows, sometimes compiling a blue chip stock list can be more art than science.

Blue chips are elite by any measure

Blue chip stocks are the upper echelon of publicly traded companies. While investors might use different criteria to compile a list of blue chip stocks, the main qualifier is elite durability. That's a trait fewer than 50 companies typically possess, making blue chip stocks a select group that most companies strive to join one day.