Does a new proposal from the Labor Department protect retirement savers' best interests or protect the oil and gas industry? You decide.

There's a battle going on, and it could affect the future of investment options in your 401(k). The Department of Labor (DOL) under President Trump has taken a stand to keep ESG funds out of workplace-sponsored retirement plans. Opposing that stance are major financial firms like Fidelity and BlackRock (BLK -1.95%), as well your favorite rock-and-roll magazine.

ESG stands for environmental, social, and governance, three factors ESG funds use alongside financial analysis to build their portfolios. ESG investing is a hot topic in 2020, because investors are increasingly recognizing that ESG factors could have a positive effect on long-term financial performance. According to Morningstar, money invested in ESG funds has more than doubled over the past three years. 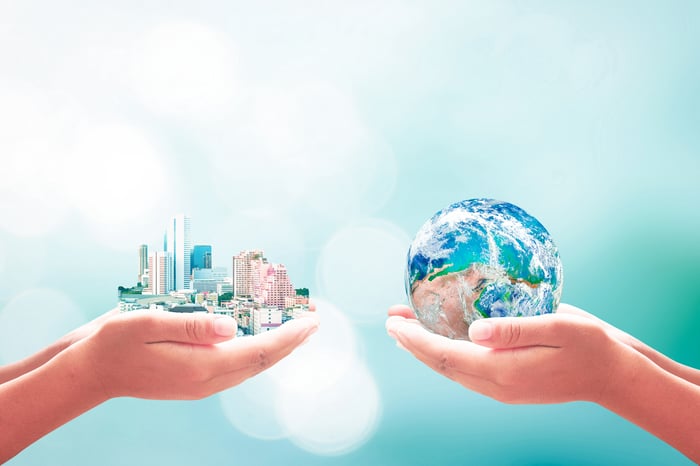 ESG investors aren't just banking on long-term benefits, though. Analyses from Bloomberg, Morningstar, and others have shown that ESG funds produce market-level returns in the short term, and with less volatility than their traditional counterparts. Note that some studies covering longer timeframes show that ESG funds have underperformed the market with slightly more volatility -- so the case for ESG investing isn't entirely cut and dried.

That bit of uncertainty, though, sets the stage for the DOL's argument that ESG funds have no place in retirement accounts.

The DOL's proposal argues that ESG factors are non-financial in nature and therefore don't serve the retirement needs of 401(k) savers. The rule would specifically prohibit plan administrators from supporting non-financial ESG factors at the expense of plan participants' financial best interests. Even in cases where administrators felt justified including an ESG fund in the plan based on financial performance alone, they'd be subject to much heavier documentation requirements.

The underlying theme in the DOL's proposal is that ESG funds trade off financial performance to pursue environment, social, and governance objectives. Because that idea is tough to support with data, proponents are crying foul on the DOL and the Trump administration -- arguing that the move is politically motivated to help out the oil and gas industry.

That's the position taken by Rolling Stone. In an article published in August, writer David Bradley Isenberg points to an April 2019 executive order from President Trump that promoted the oil and gas industry and tasked the DOL to analyze how retirement plans were investing in the energy sector. In that order, Trump references America's "abundant supply of coal, oil, and natural gas," he cites the need for "infrastructure capable of safely and efficiently transporting these plentiful resources to end users," and he confirms that it's U.S. policy "to promote private investment in the Nation's energy infrastructure."

During the 30-day comment period, the DOL proposal generated 1,101 comments,  plus petitions with thousands of individual signatures. According to an analysis by The Forum for Sustainable and Responsible Investment (USSIF), 95% of the comments and signatures opposed the rule. Notable opponents included members of the U.S. Senate, Fidelity, BlackRock, and the American Federation of Teachers.

Fidelity attacks the rule on several fronts, including the following arguments:

BlackRock's feedback focuses on defining the firm's approach to ESG investing and its own analysis on the performance of companies with strong ESG track records. BlackRock also encourages the DOL to consider the broader effects of its proposal.

Should the DOL implement the proposal, ESG investors will have to pursue these holdings outside of their workplace-sponsored plans for the foreseeable future. That probably doesn't present any new challenges for too many savers, because ESG funds aren't widely available in 401(k) plans today anyway.

Investors new to ESG should follow the usual research and decision-making best practices before diving in. Reviewing the fund's investment approach and holdings is particularly important. Each ESG fund has its own screening criteria for building its portfolio, which may or may not align with the investor's goals and values. Expense ratios in the ESG space can also be on the high side, relative to traditional funds. A "cheap" ESG fund might have an expense ratio of 0.1%, while a similarly cheap S&P 500 index fund might charge 0.02% for expenses.

In the meantime, the investment community is waiting to see how the DOL proceeds with its proposal. Sources arguing that the rule is politically motivated predict the DOL will move quickly to get it implemented before year-end.

How to Protect Your Retirement Savings From a Crash