The 1980s kicked off an era in which greed was good. Since the Great Recession, we've turned over a new leaf in the narrative: You can do well (financially) by doing good (for the world). The sentiment is so pervasive that it has given rise to socially responsible investing -- or SRI. 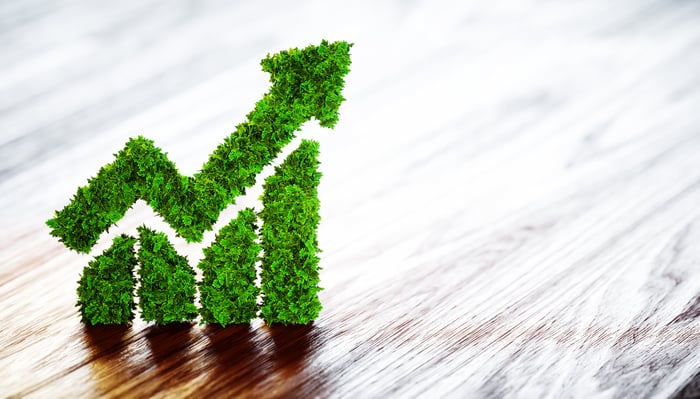 What is an SRI stock?

MSCI, a global investment research company, is a major source of SRI information. The company has exact specifications for what characteristics a company needs to be considered a socially responsible investment.

Step one: Eliminating industries based on values

The easiest place to start is by talking about what industries are automatically eliminated from being included in a list of socially responsible companies. MSCI refers to these industries as "values-based exclusions." Essentially, these are areas of the economy that have the potential to create more suffering than good. This list includes:

While this drastically reduces the number of companies that can be designated SRI stocks, there are still many others to choose from.

In this light, MSCI isn't simply looking for "do-gooders." It's following the mantra that companies can "do well by doing good." In fact, it might be more telling to say that companies that don't do well in these arenas are open to risks that might not be captured by traditional financial metrics. Consider:

After consulting a wide range of resources, MSCI then gives each company a grade. "Laggards" are those that get a CCC or B; "Average" scores are BB, BBB, and A; and "Leaders" are those that get AA or AAA scores. To be considered for inclusion in the SRI index, companies need to have an ESG score of A or above.

Next, there's an ongoing evaluation on each company based on "ESG controversies." These controversies are divided into five broad categories, including:

MSCI's team will investigate all of these areas and assign each company an ESG controversies score of 0 (the worst score) to 10 (the best score). To be included in the index, companies need a score of 4 or above.

Finally, once all of these steps have been taken, MSCI ranks the companies that are left according to their scores. MSCI comes up with model indices with several different flavors. For instance, there is an SRI index for the entire world, for Europe, for emerging markets, and so on.

How have SRI portfolios performed?

There are two ways to look at this. On one hand, the difference in performance is negligible: The SRI index outperforms by just 0.62 percentage points per year. This doesn't suggest a history of market-thumping returns.

At the same time, that's not exactly the point. Those who invest in SRI indices are often doing so because they want their investments to reflect their values. There's nothing wrong with market-matching returns -- especially if that's what your investing goals call for. If you can accomplish those returns with the peace of mind that you know where your money is going, more power to you.

Here's a look at the 10 largest components of the MSCI World SRI Index (as of July 31, 2019) and what each company does. Later, we'll investigate how each company garnered a spot on the list.

Does it seem odd to see some of these companies included? On the surface, its easy to see why software companies -- which don't produce too much waste and promote sustainability -- are on the list. But oil companies, fast food companies, and purveyors of junk food? You might be surprised once you start looking deeper.

Accenture is a global consulting firm based out of Ireland. Right off the bat, Accenture lends itself to SRI investments: Giving advice to enterprise clients is not the type of business that naturally lends itself to waste and pollution.

The company does a lot to promote the well-being of all stakeholders. This includes:

Making strides within its own business practices is important. But Accenture's real leverage -- when it comes to improving society -- has just as much to do with the advice it gives its clients as with anything else. That's why one initiative stands out as paramount: a clearly stated goal to help clients reduce global greenhouse gas emissions. In 2018, the company helped clients eliminate 301,000 metric tons of CO2 emissions -- with another 2.6 million metric tons identified to eliminate in the near future.

Of all the companies on this list, Total might be the most surprising. Gas and oil companies don't have the best reputation when it comes to sustainability: Not only does their primary product increase greenhouse gas emissions, but the extraction of such natural resources has been known to cause major ecological issues.

The flip side of that same coin, however, means that Total is uniquely positioned to help reduce pollution dramatically. Since it is the fourth-largest oil and gas player in the world, any moves Total makes will reverberate around the world. Total knows that, and the French company's overarching goal is "to become the responsible energy major" -- or major energy company.

There are multiple prongs to this approach:

Clearly, by reducing waste and emissions at sites throughout the world, Total can have an outsized effect on sustainability efforts -- which lands it a spot on this list.

Adobe is the worldwide leader in providing tools for creative professionals. The company's software is the lifeblood for the world's designers, illustrators, animators, and graphics professionals.

Because it is a software company, Adobe also benefits from the fact that it doesn't produce too much waste. If you think about it, the key product is the code that its engineers embed into the company's technology.

That being said, Adobe has made a number of SRI commitments of note:

It might be surprising to see McDonald's landing on a list of socially responsible companies. Ever since the 2004 documentary Super Size Me, it has been synonymous with unhealthy eating habits across the Western world.

But over the past decade, the company has launched a Scale for Good campaign. The idea is simple: Given the fact that McDonald's has a greater global scale than any other restaurant worldwide, it has the potential to affect more change than thousands of tinier restaurants added together. To that end, the company has focused its efforts in a wide range of areas, including:

The real leverage point unique to McDonald's is its place in the food chain. By being the face that interacts directly with the end consumer, it has the potential to affect wide-ranging changes in how beef is produced -- and how forests that are being cut down for cattle grazing can be preserved.

When people hear Pepsi, they often just think of the caffeinated beverage that's Coke's foil. But the company is much more than that. Its top brands include other beverages (Gatorade, Tropicana, Aquafina) and foods (Quaker Oats, Doritos, Fritos).

While these snacks -- by and large -- may not be well regarded for their nutritional value, the company has been going the extra mile to fulfill its SRI mission. Among the company's key initiatives:

Given the global scope of Pepsi's operations, these choices can significantly move the needle in the communities where the company has factories.

Home Depot is one of North America's largest housing and construction suppliers. The company plays an enormous role in resource deployment on the continent, so it's heartening to see its inclusion on this list.

While there have been several notable complaints about the treatment of rank-and-file employees, they haven't risen to the level at which MSCI believes they cancel out the environmental benefits of the company's initiatives.

One of a handful of non-U.S.-based businesses on this list, Roche is a major pharmaceutical and diagnostic testing company domiciled in Switzerland. The company is a leader in both cancer treatments and in vitro diagnostic testing.

It is also a leader in socially responsible business practices. By its very nature -- helping to cure and diagnose potentially life-threatening diseases -- Roche has a bent toward SRI. But those practices go far beyond just pharmaceuticals. They include:

Who doesn't know about Disney? The company is home to a sprawling media and entertainment empire. This includes a division for theme parks, another for studio entertainment, a third for media networks -- like ABC, ESPN, its namesake Disney Channel, and the soon-to-be-launched Disney+ streaming -- and a fourth for direct-to-consumer products like toys and games.

The company's SRI efforts have been massive, given the scale of its operations. These include:

These efforts are not only good for the planet but good for business as well.

Procter & Gamble is one of the world's largest conglomerates. The company makes everything from Pampers diapers to Crest toothpaste to Gillette razors. Because there's so much manufacturing involved in P&G's business, it's impressive that the company finds a spot on this list. Other companies -- predominantly software ones -- don't have to worry about pollution nearly as much.

The company is able to do that by pursuing a number of different initiatives, including:

Microsoft is not only the world's largest SRI company, but -- depending on the stock's performance on any given day -- the largest company in the world. Period. Valued at more than $1 trillion, this company is a juggernaut that includes a core software-as-a-service component (Office 365), a fast-growing cloud segment (Azure), and a number of hardware products (Xbox, to name one).

By its very nature, Microsoft lends itself to an SR focus. Software companies generate little waste -- their key product is coding done by engineers. Beyond that, however, the company has routinely gone above and beyond the call of duty. This includes:

A final word on SRI companies

Remember, just because a company lands on an SRI list doesn't mean that it's perfect. And it doesn't automatically make it a sound investment. You have to do your own homework to see how a company aligns with your own moral and investing principles.

But an SRI designation is not an unimportant part of the investing equation either. As public -- and political -- forces focus more on the environment, governance, and employee-related issues, the companies that shine in these areas will benefit. That's what makes these lists so valuable: They give insight into how companies are mitigating risks that might not be in the limelight right now but could be soon.

By paying attention to companies that are doing well by doing good, you're aligning your incentives with forces that may ultimately prove to be the difference between wealth-generating and simply ho-hum investments.