Accrued interest is used when an investment pays a steady amount of interest, which can be easily prorated over short periods of time. Bonds are good examples of investments where accrued interest calculations are useful.

In a nutshell, accrued interest refers to interest that has accumulated, but has not been paid yet. To investors, this generally is used in reference to fixed-income investments such as bonds, which generally pay interest every six months.

For example, let's say that you have a bond with a par value of $1,000 and a coupon rate of 6%. By dividing this rate by 12, we can see that the monthly interest rate is 0.5%. So, if two months have passed since the last interest payment was made, two months' worth of interest would be 1% of the par value, or $10.

This is useful to know, especially if you buy or sell a fixed-income investment. As part of the sale, the buyer must pay the price of the bond plus the interest that has accrued since the last interest payment was made.

Compound interest means that interest accumulates over time, not just on the principal but on the interest that was previously earned as well.

The opposite of compound interest is simple interest, which is the type of interest paid by bonds and certain other fixed-income investments. For example, a bond with a $1,000 par value and 5% coupon rate will pay $50 per year for the life of the bond -- no more, no less.

On the other hand, compound interest allows for exponential growth. Let's say that you have a $1,000 five-year CD that pays 5% interest, compounded annually. (Note: Most CDs compound daily or weekly, but we'll use the annual example to keep this simple.) During the first year, the CD would pay $50 in interest, which would then be added to the principal.

Where compound interest gets really interesting is in high-potential investments, such as stocks, compounded over long periods of time.

Historically, the stock market has produced average annual returns of about 9.5%. So, if you invest $10,000 in stocks for 30 years, it could balloon to more than $152,000 based on this historic rate. That's the power of compound interest to investors. 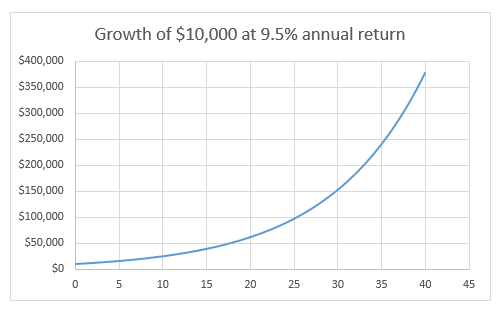