Blue chip stocks are the stocks of high-quality companies that have become leaders in their industries. Named for the traditional color of the most valuable chips at a poker table, blue chip companies are among the most respected in the business world. They've stood the test of time with solid business models that have produced substantial profits and attractive returns for their shareholders. As a result, blue chip stocks are immensely popular among investors.

What makes a blue chip stock?

Blue chip stocks share several traits . Although there's no single universally accepted definition of what makes a blue chip stock, most investors agree that the following characteristics are important for a blue chip company to have: 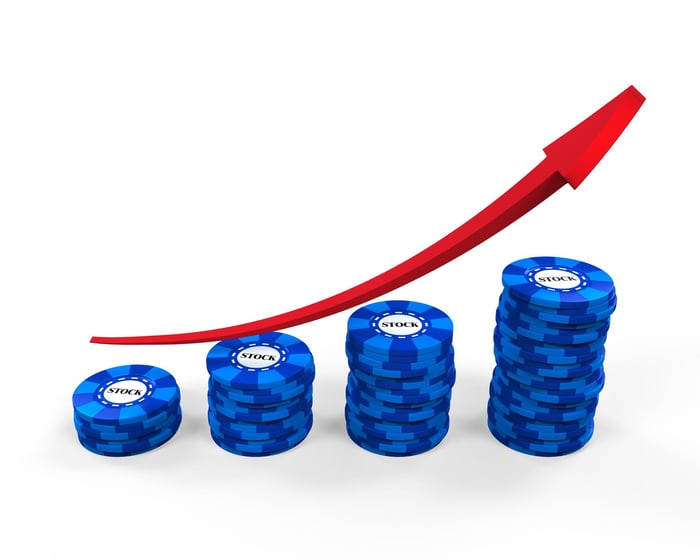 The core advantage that blue chip stocks have compared to their peers is the size of their businesses. In order to achieve blue chip status, companies have to demonstrate their ability to outpace their competitors. It takes a long time for a new business to prove itself and become the leader in its field, and that process weeds out many inferior companies that don't have what it takes. Only those businesses that survive the test of time become blue chips, and so investing in these well-established companies after they've already reached the pinnacle of their industries avoids the uncertainty and risk that investors in smaller up-and-coming companies have to accept.

The size of blue chip companies also gives them competitive advantages. Most businesses benefit from economies of scale, meaning that as they grow larger, they can become more efficient and take advantage of opportunities that smaller companies can't. It's easier for blue chip companies to get the capital they need in order to finance new business ventures, either by getting loans from financial institutions or by issuing stock to investors. When blue chip companies do face competitive threats from smaller businesses, they have the resources to take strategic steps to fend off their potential rivals, either by acquiring those competitors or by giving incentives to their rivals' customers to switch their business relationships.

Over time, these advantages give shareholders in blue chip stocks attractive returns on their investment. For instance, the Dow Jones Industrial Average has risen at an average annual rate of roughly 7% over the past 50 years, and its stocks have paid enough in dividends to boost the total return of the blue chip stocks in that benchmark above 10% per year.

Blue chip stocks aren't immune from short-term declines, and some even see their businesses fail. But on the whole, blue chip companies tend to have more secure, stable businesses than other companies, and that relative safety makes them especially attractive for more conservative investors who prefer to minimize their risk when investing in the stock market.

What are some examples of blue chip stocks?

You don't have to be an investor to recognize the names of many blue chip stocks, because their products and services are a part of everyday life for millions of people across the globe. The following companies represent just a handful of the stocks available to investors, but they'll give you an idea of where to look in many of the most important industries in the global economy.

How can I invest in blue chip stocks?

Investors who want to add blue chip stocks to their investment portfolios have a number of options. The simplest is just to buy shares of individual stocks directly. By selecting from the companies above as well as other industry leaders, you can put together a diversified portfolio of many different blue chip stocks quite easily.

You can also invest in blue chip stocks by using an index fund that specializes in tracking these leaders. For example, the SPDR Dow Jones Industrial Average ETF (NYSEMKT:DIA) includes four of the five stocks mentioned in the list above, along with more than two dozen other top blue chip companies in industries ranging from manufacturing and healthcare to consumer products and technology.

Blue chip stocks are smart investments for investors of all kinds. Beginning investors might find it more comfortable to buy shares of these blue chip companies with which they're already very familiar. Experienced investors can more deeply appreciate the attractive features that blue chip stocks offer investors, having seen firsthand how they have outperformed their rivals to achieve their current status. If you want stability and reliability among your investments, blue chip stocks are a great place to look.