Regal Cinemas to Reopen in April: The Impact on Real Estate Investors

Movie theaters have taken a serious beating in the course of the coronavirus pandemic. Between forced closures early on, capacity restrictions, and a dearth of new films to screen, revenue has been extremely sluggish for theaters over the past 12 months.

Last October, Cineworld Group (LSE: CINE), the parent company of Regal Cinemas, made the decision to temporarily close all of its U.S. and U.K. movie theaters. But now, things are turning around, and Regal is reopening at a rapid clip.

In fact, around 500 theaters are welcoming movie fans back this month at limited capacity. In most cases, that means 25% to 50% of seats can be filled, depending on local guidelines.

But that's not the only good news to emerge from Regal. Cineworld also signed a multi-year agreement with Warner Bros. that begins in 2022 and states that Warner Bros. feature films will have to play in theaters for 45 days before moving over to streaming platforms. Late last year, Warner Bros. dealt a harsh blow to theaters by announcing plans to stream all of its 2021 movie releases on HBO Max at the same time they hit theaters. This new arrangement is apt to entice movie fans to visit theaters rather than fall back on the ease and convenience of staying home and streaming the content they're eager to view.

The fact that Regal is reopening theaters -- and expects enough consumer demand for that to make sense -- is a good thing for real estate investors. This especially applies to investors with entertainment real estate investment trusts (REITs) in their portfolios.

Take EPR Properties (NYSE: EPR), which gets a substantial portion of its rental income from movie theaters. EPR's shares have done well in 2021, fueled largely by positive news on the theater front, like the fact that AMC Entertainment (NYSE: AMC) averted bankruptcy and benefitted from the Reddit-fueled short squeeze that sent GameStop (NYSE: GME) shares soaring as well. As movie theaters reopen, entertainment REITs should benefit.

And to be clear, there will likely be a surge in consumer demand once movie theaters begin opening their doors on a widespread level. After a year of being cooped up at home, many movie fans will no doubt be itching to watch films in a location other than their respective couches. And it's not just ticket sales that benefit theaters. Many theaters get the bulk of their revenue from concessions, so the more patrons they're able to welcome back, the better.

Regal Cinemas is the second-largest theater chain in the U.S., second only to AMC. It already has plans to showcase a number of new Warner Bros. films this month, and while those movies may be hitting streaming services simultaneously, that shouldn't deter hardcore theater fans from leaving the house to see those releases on a big screen. Furthermore, as coronavirus vaccines roll out to an even greater chunk of the population, we could reach a point where theaters get to operate at full capacity again -- and enjoy a serious revival that benefits real estate investors in a very meaningful way.

AMC Raised Nearly $1 Billion to Stay Open: Half from Sale of New Stock 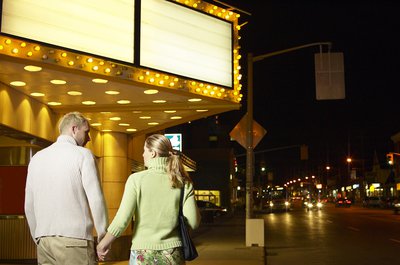 Alamo Drafthouse Is Out of Bankruptcy -- and It Has Big Plans