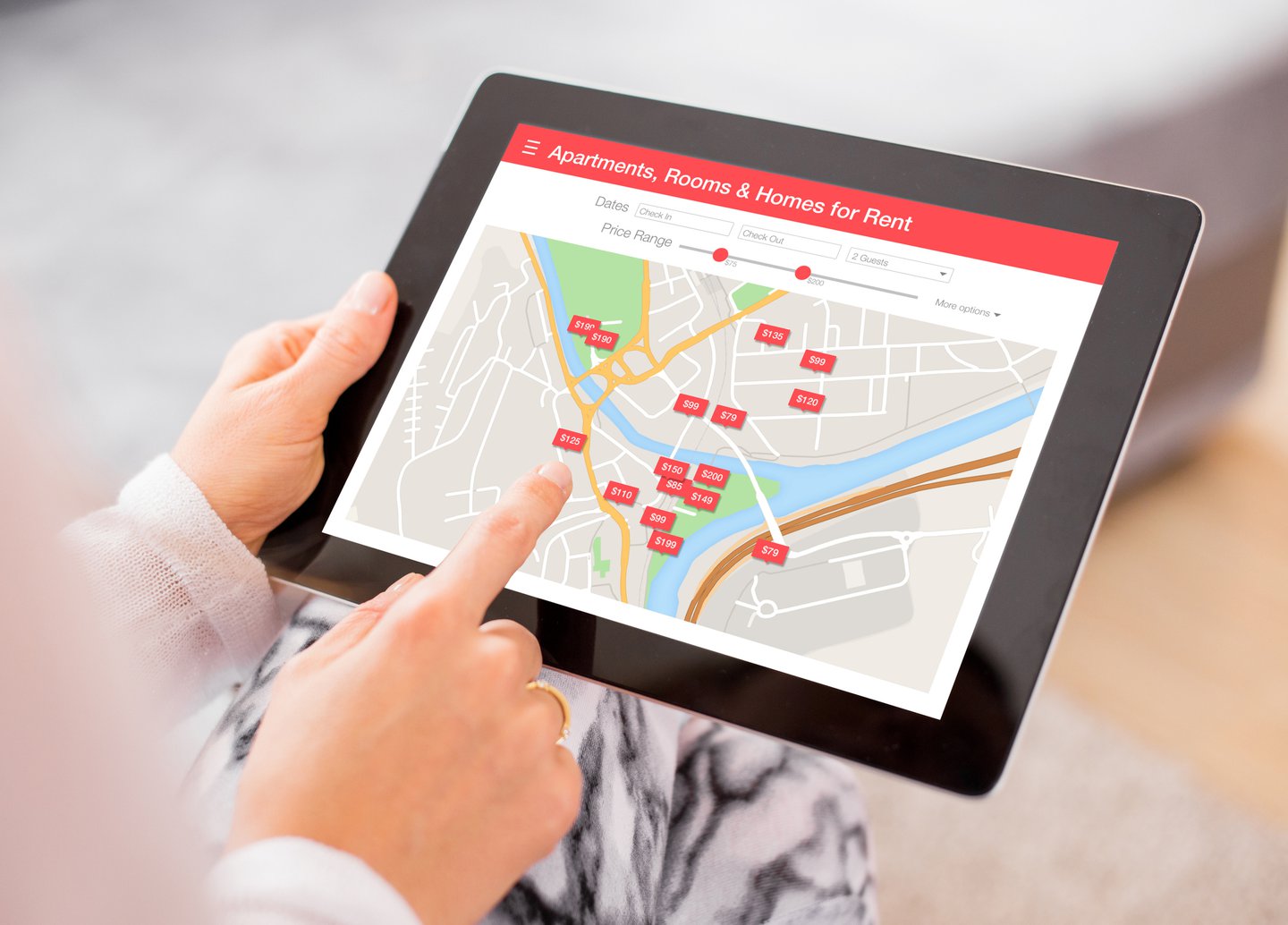 Redfin: What You Need to Know

Few industries are begging to be disrupted as much as real estate. The way we buy and sell houses, obtain mortgages, and the fees we pay for real estate transactions have been largely the same for decades.

Redfin (NASDAQ: RDFN) sees a massive opportunity to change the game. The company wants to revolutionize the way we buy and sell homes and how much we pay for associated services. And the market opportunity is enormous.

Here's a quick overview of what Redfin does, how it plans to change the real estate industry, and what investors should know before deciding whether to add it to their portfolio or not.

Redfin describes itself as a "technology powered real estate company." Its core business is its brokerage services, and the company is also an iBuyer, meaning it buys homes directly from sellers and aims to resell them for a profit.

Even though advances like multiple listing service (MLS) databases, smart technologies, and more have made it easier to buy and sell real estate, the industry standard is still a 6% commission when selling a home. Furthermore, the selling process can be lengthy and complex, and there are some clear inefficiencies and antiquated business practices involved in real estate transactions.

That's where Redfin comes in. The company's brokerage business leverages technology to make selling homes more efficient and passes some of the savings on to customers. More than 80% of home tours of Redfin-listed homes are scheduled automatically, and over 65% of its agents can write offers directly from their phone, just to name a few efficiency advantages.

I mentioned the industry-standard commission when selling a home is 6% -- typically divided between the buyer's agent and seller's agent. Well, Redfin charges just 1.5% for its selling services (1% if the customer also buys a home through Redfin), half of what the typical listing agent gets and saving homeowners thousands of dollars in the process.

Redfin-listed homes tend to sell faster than homes listed with traditional brokerages, and for a greater percentage of their listing price. With an estimated average savings of nearly $12,000 for a customer who sells a home through Redfin and buys their next home through the company's platform, it's getting tougher to make the value case for using a traditional real estate brokerage to sell a home. In 2019 alone, an estimated $82 billion in real estate commissions were paid in the U.S., so this is a huge market.

The other side of the business is the RedfinNow iBuyer program, which has grown substantially since its inception. The general idea behind iBuying is that homeowners can request an all-cash offer for their home and will receive one just a few days later, dramatically simplifying the selling process. The program is only available in a few markets in California, Colorado, and Texas right now, but the company plans to dramatically expand this over the coming years.

To be fair, sellers aren't likely to get as much from Redfin as they would by listing their home through a broker and selling it to a private buyer. But there's value in eliminating the hassle and back-and-forth negotiations involved with listing a home, and sellers can choose any closing date between seven and 60 days after accepting. And selling a home through RedfinNow isn't commission-free, making it a potentially huge moneymaker for the company.

Here's a closer look at Redfin's cost structure for sellers:

In addition, Redfin also has a mortgage origination business (known as Redfin Mortgage), which originates mortgages in 51 markets in 18 U.S. states. This isn't a large portion of Redfin's business (yet), but there's a ton of potential in cross-selling services to homeowners who list or buy homes through Redfin's platform.

So far, Redfin's approach to disrupting the brokerage industry has been a big success. Redfin gets 59% more repeat customers than other brokerages, most likely thanks to the even-better cost structure for sellers who use Redfin to buy their next home. Redfin's website has four times the traffic of its next closest brokerage competitor. And revenue has more than quadrupled since 2015, while Redfin's share of the home selling market has more than doubled.

Redfin wasn't completely immune to the COVID-19 pandemic. In fact, Redfin notably paused the RedfinNow iBuyer program at the onset of the pandemic, and its brokerage business largely ground to a halt as the U.S. economy was mostly shut down.

Having said that, the recent numbers look good, especially when considering the pandemic-related disruption. Redfin managed to grow its revenue 8% year over year in the second quarter and did a fantastic job trimming its operating expenses.

Like many other rapidly growing technology-focused companies, Redfin is not profitable. The company lost $6.6 million in second quarter 2020. Although that's about half of what it lost in the same quarter in 2019 and management is expecting positive net income in the third quarter, investors should know consistent profitability could still be years away.

Redfin's business could still have tons of room to grow, too. At the end of 2019, the company's market share for its brokerage business was 0.93% of homes sold, so it could conceivably multiply its business several times over in the years ahead.

And Redfin's iBuying business has serious potential as well: If the company could account for just 1% of the roughly 6 million annual existing home sales in the U.S. and figure out how to do it profitably, it could add hundreds of millions to Redfin's top line.

Although Redfin has been in business for about 15 years, the company didn't go public until 2017. And for the first two-and-a-half years of its public history, the stock didn't do much. But that all changed in 2020, when the real estate market caught fire due to record-low mortgage rates. Investors started to see the value in Redfin's technology-focused platform, especially with the COVID-19 pandemic making it difficult to conduct business in person.

In all, Redfin has delivered a 134% gain since mid-2017, but this is a bit deceptive since the stock was actually down going into 2020. As you can see from the chart, all of the gains in Redfin have come this year. 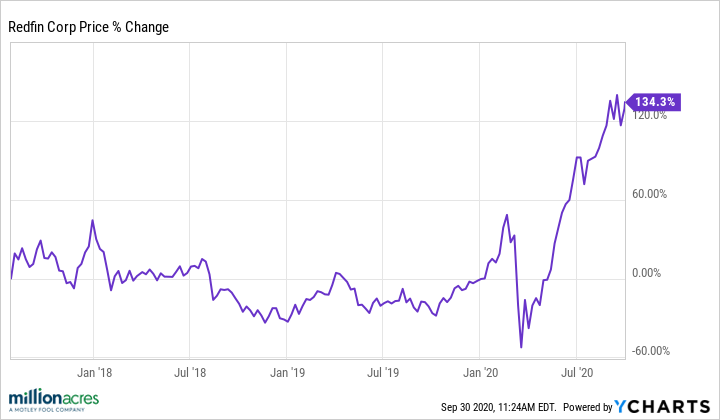 Redfin isn't exactly a low-risk stock. No real estate technology company (including Redfin) has figured out how to do iBuying profitably at scale. It remains to be seen if this will ever become a profitable business for Redfin.

And there's a ton of competition risk involved with Redfin's model. While its listing fees are certainly lower, customer reviews have been mixed, with many indicating they aren't getting the level of service they'd expect from a listing agent.

In short, some bugs still need to be worked out. But Redfin is a massively disruptive company with an enormous market opportunity, and if it can successfully scale its business, its revenue could multiply to several times its current level.

Should I Invest in Equity REITs or Mortgage REITs? 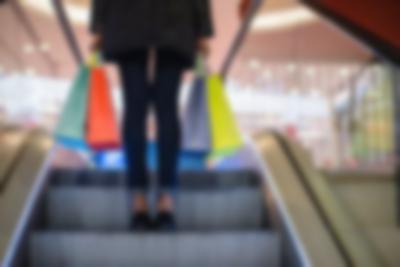 REIT Investing 101: How to Value REITs 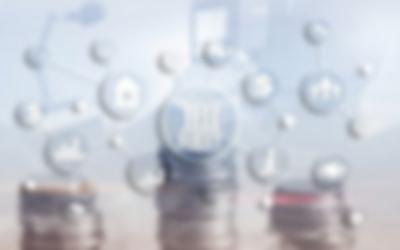 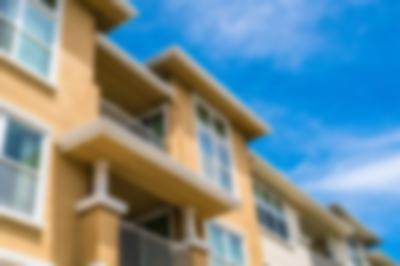 What’s the Advantage of Buying a Private REIT?