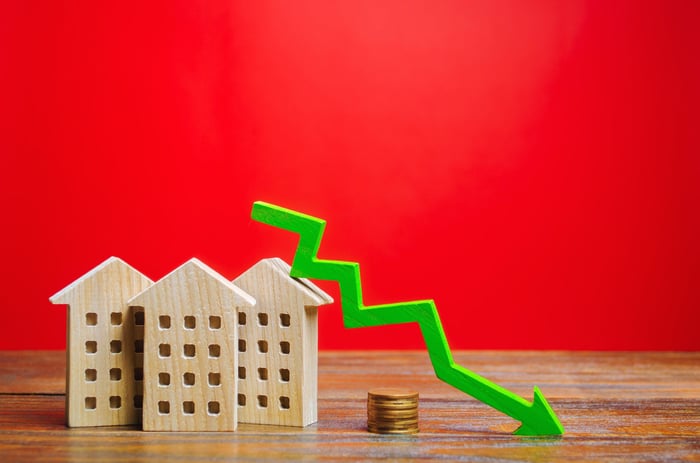 If the red-hot housing market indicates anything, it's that buyers are loving the low mortgage rates. But how long will mortgage rates stay low?

It is impossible to say with certainty what's going to happen with mortgage rates, but it's a safe bet that they'll stay low for the foreseeable future. Our prediction is based on the following three signs:

How mortgage rates are adjusted

It's no secret that COVID-19 did a number on the economy, bringing entire economic sectors to a screeching halt, and leading to the concern that the housing market was about to go into a deep freeze. In an indirect way, the global pandemic is responsible for the current low mortgage interest rates, which are (in part) responsible for more mortgage applications. Here's how that happened.

The Federal Reserve recognized a problem

A committee of 12 within the Federal Reserve, called the Federal Open Market Committee (FOMC), meets eight times a year (and in emergency situations) to assess the state of the economy. If the economy is steaming along nicely, they leave the federal funds rate where it is or may raise it to slow things down enough to curb inflation.

To give you an idea of where the federal funds rate normally lands, the long-term average is 4.72%. The rate in late 2019 and early 2020 -- before COVID-19 shuttered the economy -- hovered around 1.55%. While many factors went into setting this rate, it's safe to assume that the Fed felt comfortable with the direction of the economy and were not worried about inflation.

The first laboratory-confirmed case of COVID-19 in the U.S. was reported to the CDC on January 22, 2020, and the country adopted a "wait and see" attitude. There was no panic, and rather than drop, the federal funds rate continued to tick up ever so slowly for the next five weeks. On March 5, the rate was 1.59%. But by April 5, it was at 0.05%. That intervening month saw a rapid increase in the number of COVID-19 cases, mass layoffs, and the closing of entire industries. In the face of what appeared to be economic disaster, the Fed lowered the rate in hopes of keeping the economy on the tracks.

As mentioned above, the federal funds rate is the interest rate banks use to borrow money from one another. The Federal Reserve's goal in lowering the rate was for everyday consumers to take out mortgage loans, refinance existing mortgages, use their credit cards, invest in treasury bonds, and otherwise stimulate a stagnant economy. In other words, they wanted to create economic growth.

The federal funds rate impacts banking business and ultimately, you

Again, many things go into determining the federal funds rate, but in this case, it is clear that COVID-19 was the driving factor.

Banks add enough to make a profit, but still compete

Every mortgage lender wants to make a profit, so they pad the federal funds rate. Say Mortgage Lender A is paying 0.09% for the funds they borrowed to get their reserves up to snuff. They know that if they charge their most highly qualified borrowers 3.25% interest on a mortgage loan, they'll still make money over the life of the loan. Given that most mortgage loans have terms from 15 to 30 years, that could be a pretty sweet profit. Now, Mortgage Lender B also paid 0.09% for the funds they borrowed. As they set their mortgage rates, they not only want to make a profit but they also want to stay competitive. Perhaps they set their lowest rate at 3.10% to stand out from the crowd. The point is, the federal funds rate is the foundation upon which the interest rate is built.

A small library of books has been written about the potential for a worldwide pandemic, but no one could have predicted when it would hit. You may not have the ability to forecast the next "big" event that leads the Federal Reserve to adjust the federal funds rate. Still, you can keep your ear to the ground. When you begin to hear rumblings about the Federal Reserve changing the rate, pay attention. The direction it moves will give you the best indication of what's about to happen with mortgage rates. Ultimately, the ability to lock in a low mortgage rate can save you thousands and make you a happier homebuyer.