Millennials are perfectly positioned to grow a lot of wealth and perhaps retire early -- or to make big financial mistakes that they might regret for decades.

When you're young, the long life you likely have in front of you is a massive opportunity. You're perfectly positioned to accumulate wealth and even retire early -- or to make big financial mistakes that you might regret for decades. Here are three of the worst money habits that many in the Millennial generation have. See if you recognize any and if you can stop yourself or a young person you care about from engaging in them.

Jason Hall: Millennials have certainly had the hardest start of any generation in decades, with so many trying to get a start in the world in the middle of the worst recession in 80 years. Unemployment and debt remain real problems for the group, and they're likely to affect many for decades to come.

According to a recent survey by America Saves, a higher percentage of Millennials are saving at least 5% of their income than any other age group -- 56% -- and 75% of those working save at least part of their income. The survey also showed that nearly two-thirds have emergency savings. That's good.

What's less good, though, is their retirement savings. Of the group surveyed, more than half said they weren't saving for retirement. This isn't so uncommon for young people, but it's unfortunate because of the power of time and money. Check out the chart below to see how money can grow, using the real historical market returns of the S&P 500: 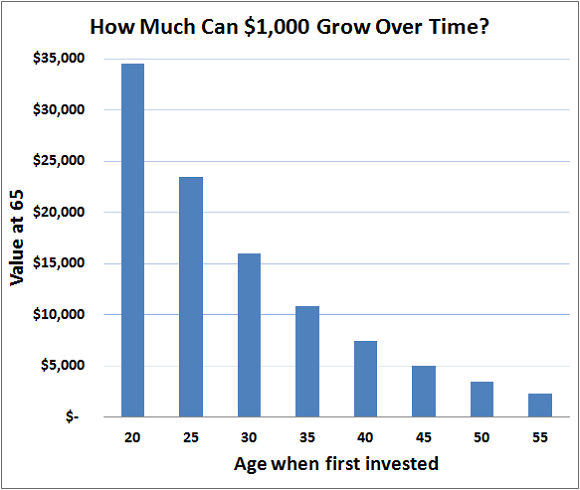 Dan Caplinger: It's perhaps unfair to blame it entirely on Millennials themselves, but the huge sums of student-loan debt that many millennial graduates have taken on in order to get their college degrees has left them in a tough position -- with major ramifications for their financial lives for years after they leave the classroom. Student-loan debt climbed to $1.16 trillion by the end of 2014, up from just $350 billion a decade earlier, according to figures from the Federal Reserve Bank of New York. In contrast, credit card debt actually shrank, while total debt excluding mortgages and other housing-related borrowing grew at a much more modest pace over the time period.

As unappealing as it might seem, taking a realistic look at the potential long-term benefits of your college education compared to the cost of tuition and related expenses is a good way to assess the risk of getting yourself in over your head. That's a tough order for most students who've just graduated from high school, yet even parents who want to support their children don't always have the financial means to do so. Looking at less expensive educational alternatives such as public colleges and universities as well as online training and teaching can often make a huge difference in your ending loan balance -- and on your finances for the rest of your life.

Credit cards can be a great convenience or a great danger.

Selena Maranjian: Dan covered student-loan debt, which can have Millennials falling behind instead of getting ahead, but there's another kind of debt that can wreck financial havoc, too: credit card debt. According to a recent report from CreditCards.com, 36% of Americans between the ages of 18-29 have never had a credit card. That bodes well for their debt profiles. But it also means the majority of Millennials do have credit cards.

Credit cards can be very convenient and can make our financial lives easier, but if we don't pay our bills in full and on time each month, we can set ourselves up for massive trouble. That's because many credit cards will charge 20% or more in annual interest rates, which can quickly have debt loads spiraling out of control. Think of it as reverse investing: Just as you would enjoy seeing a $10,000 investment grow to nearly $62,000 in 10 years if it grew at 20% annually (a generally unrealistic rate, by the way), a $10,000 debt balance can top $60,000 in a decade, too -- especially if you keep charging. Yikes.

When Millennials are deep in debt, it can keep them from being able to buy a home or save for retirement. It can even put pressure on their relationships. A recent Harris Poll survey for NerdWallet found that 45% of adults aged 18-34 acknowledge bringing credit card debt into their relationship and 25% of couples report that debt having had a negative effect on their relationship.

If you're a Millennial with credit card debt -- or any other kind of debt other than low-interest rate loans such as mortgages -- make it a priority to pay it off as soon as you can, even if that means some sacrifice. Skip some meals out, skip some Frappuccinos, pass up that fetching pair of shoes, and even consider getting a part-time job on the side. The sooner you're out of debt, the sooner you can start building a strong financial future.

Millennials are in the enviable position of having decades ahead of them in which they can work and save money in order to make their futures financially secure and comfortable. It's important to not make game-changing mistakes along the way, though.