Kristi Waterworth
(TMFMaldivesBlue)
Author Bio
After a misspent youth mucking about in local news, Kristi Waterworth had the unique privilege of working as a Realtor and general building contractor prior to the Great Recession. Honestly, she's never really gotten over it. Now, she writes about real estate and the metaverse for The Motley Fool. Please feel free to drop in on her on Twitter and announce your opinions loudly.
Follow @TMFMaldivesBlue

When Hurricane Ida made landfall in late August, we saw yet another example of just how destructive Atlantic hurricanes are becoming. It rained destruction (both literally and figuratively) in Louisiana, before eventually making its way up to New York City, where a dangerous amount of water was released on a city that was in no way ready for it. A lot of people died due to Ida's destruction, and a whole lot of property was damaged.

It would be easy to say that Ida was an anomaly and didn't represent the future of hurricane season in America, but the truth is that Ida is just a taste of what's coming. Inevitably, this is going to cause ripples across the real estate industry, from insurers to mortgage lenders. 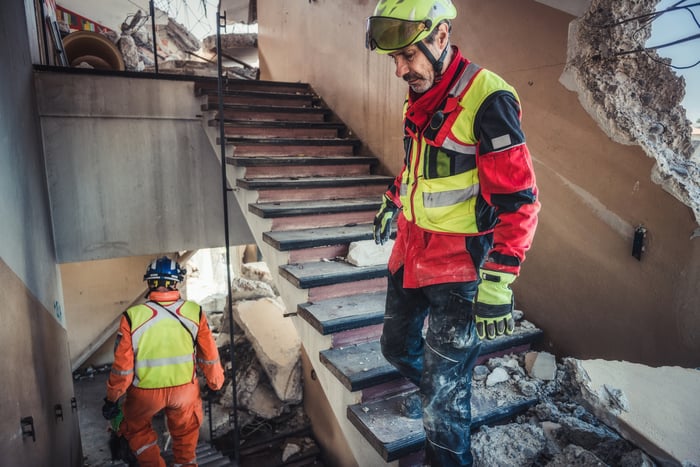 According to the Intergovernmental Panel on Climate Change (IPCC)'s most recent report, "Climate Change 2021: The Physical Science Basis," finalized on Aug. 6, 2021:

"It is very likely that heavy precipitation events will intensify and become more frequent in most regions with additional global warming. At the global scale, extreme daily precipitation events are projected to intensify by about 7% for each 1°C of global warming (high confidence). The proportion of intense tropical cyclones (Category 4–5) and peak wind speeds of the most intense tropical cyclones are projected to increase at the global scale with increasing global warming (high confidence)."

All of this would be kind of awful enough, and a serious pain for insurance companies (but not necessarily the problem of mortgage lending), except for what a study by Ding Du at the Office of the Comptroller of the Currency at the Department of the Treasury and Xiaobing Zhao at the W.A. Franke College of Business at Northern Arizona University discovered by analyzing data from the aftermath of hurricanes Harvey and Maria.

Hurricanes are gifts that keep on giving

Of course, the initial landfall isn't the only damage caused by a hurricane, as we recently witnessed with Hurricane Ida, whose remnants absolutely bathed New York City. The flooding was so severe that NYC now has a new plan for beefing up stormwater-related infrastructure, as well as storm-proofing basement apartments that have never had significant flooding risk before.

The storm hit NYC on Sept. 1, 2021, after making landfall in Louisiana on Aug. 29, 2021 about noon. It had plenty of time to lose steam as it moved north on the 30th and 31st, but it instead was an engine of destruction as it traveled. Many of the areas that got part of the storm were already accustomed to this level of damage from hurricanes, so they were prepared, but New York City was not designed nor prepared for the sheer volume of water that was dumped on it. It will still be awhile before we see exactly what kind of hit mortgages in that area take.

Mortgage lending is about managing risk

Of course, in mortgage lending, you expect a certain amount of risk and loss. That's why banks charge interest and fees, after all. If they all knew you'd pay your mortgage back without any question, well, it would be a lot easier to get one and a lot cheaper. But things happen; people default, either due to poor circumstances or strategically (a frequent practice of underwater mortgage holders during the Great Recession); and all the money that lenders send out doesn't come back in.

And although insurance companies and government agencies like FEMA are meant to help keep homeowners in their homes in the aftermath of a disaster, they're far from foolproof. As the study by Du and Zhao showed, disasters are a time when people often throw up their hands and walk away. It can be extremely overwhelming to try to clean up and rebuild -- there's no question about it.

But mortgage lenders aren't moved by emotion and the human experience. They look at the bottom line, and areas that have high default rates are going to start moving the needle. What this looks like is going to depend on how bad the situation is. It may start with the insurance companies, like what's happening in fire-prone areas right now, or it may show up as a higher cost of lending.

All mortgages are priced based on two elements: the risk a borrower presents, and the risk that a property presents. So, if you aren't high risk and the house looks to be easy to turn over if it's repossessed, you'll see a decent mortgage rate when you apply. But even if you're a low risk on a high-risk home, well, that may translate into a higher interest rate or other fees, depending on your lender.

This isn't happening yet, but I fear it's coming. I've watched mortgage lending change dramatically since the late 1990s when I started working in the real estate industry. A lot of the programs we had back in those devil-may-care years before the market crashed no longer exist, and qualification is so much harder for almost everyone. It's not a static business, and there's no reason to believe that climate change-related risk-based pricing won't become a major component in the future.