The morphing variants of the coronavirus pandemic continue to wreak havoc on return-to-the-office plans for many of America's largest employers.

Ford Motor Company (NYSE:F) announced this week that it's delaying from January until March 2022 its plans to launch its hybrid model -- we're not talking pickup trucks here, but workers coming in for two or three days a week -- for about 30,000 workers for the nation's second-largest automaker.

That follows by a few days a similar announcement from Alphabet, which had been planning a Jan. 10, 2022, date for full reopening of Google offices that employ tens of thousands of people in multiple locations. Google's announcement said the uncertainty caused by the omicron variant was prompting the company to not set a firm date to fully open its offices.

Google is hardly alone among employers large and small facing the same conundrum and taking the same action, and that uncertainty will continue to plague the office space market so hard-hit by COVID-19 for coming up on two years now. 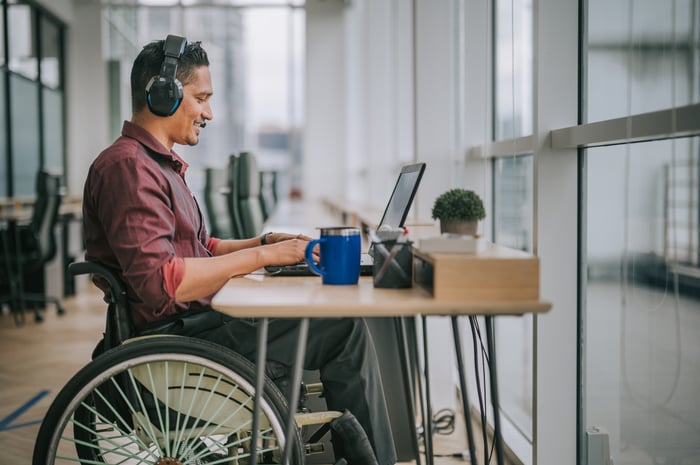 Here are three ways real estate investors are being affected.

The demand for office space collapsed as downtowns and office parks everywhere emptied during the initial shutdown in spring 2020. One way many landlords -- including real estate investment trusts (REITs) -- responded was by offering rent deferrals and reductions. Many tenants themselves responded to their need for less space by subleasing to others.

Then vaccines arrived, and the pandemic appeared to subside. That sparked predictions of a return to a new normal, which also includes hybrid return-to-work plans and social distancing, providing some optimism that a significant amount of office space would still be needed.

But now that's not happening to the level that was anticipated, and the clear preference for millions to stay home, even if they have to change jobs or join the Great Resignation, is clouding the future for a full return to pre-pandemic office space demand.

2. It all affects retail businesses and other services around those offices

Central business districts aren't just the province of white-collar offices. Restaurants, convenience stores, medical offices, and more cluster around these districts to serve the workers therein. Parking lot vendors, public transportation, Uber and taxi drivers -- there are just so many other people involved and dependent on that occupancy of office space, affecting rent and tax collections alike. Collectively, this could have a long-lasting effect on the infrastructure centered around people working in large numbers in all that commercial real estate.

3. What happens with office space can sustain housing growth in the suburbs and beyond

Surveys regularly record the broad desire among workers to work from home, and they're voting with their feet, too. People across multiple industries and professions who can work remotely are helping drive migration to smaller markets for lifestyle and affordability reasons alike. There seems little reason for this to not continue, especially with the continuing pandemic -- and whatever could be coming up next.

After COVID-19 vaccines arrived last year, people began returning to the office in significant numbers, and despite pushback, vaccinations are still a mandate in some markets, including New York City.

Just feeling safe to be around other people should encourage people who need the space to return to their companies' offices or to co-working spaces.

And, of course, every market has its own story to tell, but whether there's a widespread, long-lasting return to booming downtown and suburban business districts in general remains to be seen.