Please ensure Javascript is enabled for purposes of website accessibility
Log In Help Join The Motley Fool
Free Article Join Over 1 Million Premium Members And Get More In-Depth Stock Guidance and Research
By Marc Rapport - Jan 13, 2022 at 11:00AM

The Tampa-St. Petersburg region has long been a haven for retirees and working northerners alike heading to the Sunshine state for the weather, the ocean, and affordable real estate. Now they're coming the other way, too.

According to University of Florida research cited by the Tampa Bay Times, a lot of the people moving into the Tampa Bay area are coming from elsewhere in Florida, especially from Palm Beach and Miami.


Add that to a substantial number of newcomers from other states and you can expect a population boom that bodes well for real estate investment. In fact, the Tampa-St. Petersburg-Clearwater metro area as a whole has grown to 2,945,000 as 2022 unfolds, up 1.17% in a year, and the city of Tampa itself has swelled to 397,085 souls, up 1.7% in single year. 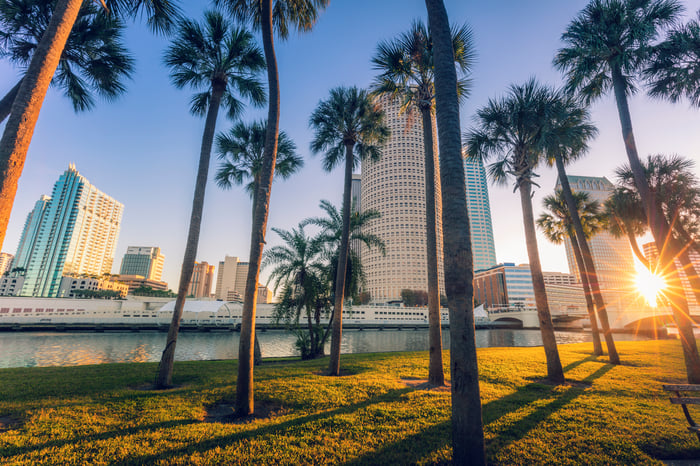 Along with the weather and the Gulf of Mexico and all the attractions of old Tampa itself, including its own theme parks and proximity to Orlando, the sprawling Tampa Bay area offers plenty of career opportunity. There's the growth of small technology firms, as well as home bases for seven Fortune 500 companies, including Publix Supermarkets, Roper Technologies, WellCare Health Plans, and Bloomin' Brands. Add in the Port of Tampa -- Florida's largest -- and the thriving tourist trade (when the pandemic ends, especially) -- and you have the makings of a major seller's market.

Zillow and Realtor.com agree: This spot is hot

Zillow just named Tampa its hottest market for 2022, saying its analysts see home values here growing from the fourth-fastest among America's 50 largest markets in 2021 to the fastest acceleration this year.

The giant listing service puts the typical home value of homes here at $323,040 and says they've gone up 29.5% over the past year and should jump another 24.6% in the next year. Zillow says its ciphering takes into account only what it considers the middle tier of homes, excluding the high and low ends of the market.

Realtor.com, meanwhile, predicts home sales to rise by 9.6% and prices by 6.8% in the Tampa metro, making it the nation's 10th hottest by its calculations. That big listing service also says the median listing price of a home in this metro rose 11.6% to $357,000.

That's still a bit below the $375,000 national median, and the overall cost of living in Tampa is still a bit lower than the national average, by about 5%, according to Payscale.com.

Plus, compare that to the $612,645 in value that Zillow places on a typical home in its number one market in 2021: Austin, Texas. Not to mention all those areas in and around Silicon Valley and other high-dollar markets where a million bucks no longer buys much. It's all relative.

A great place to buy, sell, or trade ... snow for sunshine

The old cliché' of snowbirds feathering the nest of Sunshine State destinations still holds true to some extent but probably can't account for much of this population explosion in the Tampa Bay area. To wit, the average age here is 35.7 years, compared to 38 nationally, as Tampa continues to reap its share of a general migration south and southwest.

In fact, all 10 of Zillow's top 22 markets for 2022 are in the Sun Belt, and Tampa may well stay there for a while. The population of Tampa-St. Petersburg-Clearwater metro area is expected to surge 15% by the end of the decade and then another 9% from 2030 to 2040. That's two decades of growth that makes this market a particular hot spot in which to invest in some residential or commercial real estate.

Come to think of it, that goes for buyers and sellers alike. It depends on how long you plan to stay and when you intend to cash in, I guess.

7 Things You Should Absolutely Not Do as an Airbnb Host

This Dividend Stock Bit Off More Than It Could Chew -- Should You Sell or Hold?

Buy Now or Wait a Year? This Is What Homebuyers Should Do to Avoid Making a Big Mistake