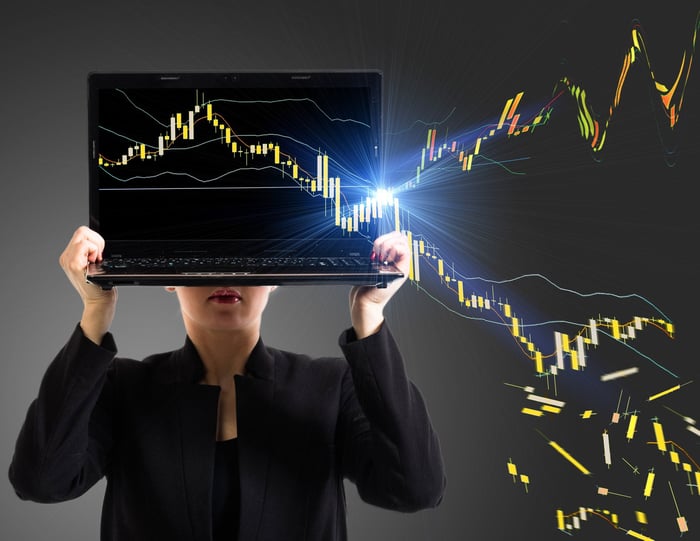 Investing is a great way to grow wealth and attain financial security, but women seem to struggle with it more than men. Lower wages and a lack of confidence hurt women's ability to succeed as investors, and in the absence of big changes, female investors may continue to lag, especially when it comes to long-term wealth and retirement savings.

But why is there such a disparity between male and female investors? Let's dive in.

In general, having more money to invest leads to more robust wealth accumulation. In this regard, women have a pretty glaring disadvantage.

All told, there's a cumulative $1,055,000 lifetime earnings gap between men and women at retirement age. It's not surprising, then, that women are 80% more likely than men to face poverty in retirement.

Women are often encouraged to advocate for higher wages, but they face roadblocks even when they do. Case in point: women are less likely than men to get raises when they come out and ask.

And, given that 39% of women have forfeited income or career advancement to care for the needs of children or parents, it's easy to see why investing could prove challenging for them. Less income means fewer funds to put to work.

Women are less confident than men in their investing skills

Women have historically lacked confidence in their ability to invest. Fidelity reports that only 9% of women think they make better investors than men. A study by Merrill Lynch and Age Wave found that only 52% of women say they feel confident managing their investments, compared to 68% of men.

Data from FINRA drives home this point, with 71% of men assessing themselves as having a high level of investment knowledge, compared to 54% of women. Along these lines, 49% of men feel comfortable making investment decisions, compared to just 34% of women.

After reading these statistics, it's not surprising that only 23% of Certified Financial Planners are women.

The good news is that investing confidence among women increases with age. While 46% of millennial women feel equipped to handle investments, the same holds true for 52% of Gen X women, 54% of female baby boomers, and 60% of women of the silent generation.

The fact that 62% of women feel they have the financial skills to save for retirement is also heartening. But only 43% of women, compared to 59% of men, are very confident they've planned adequately for retirement income, reports U.S. Trust.

A big part of growing wealth and ensuring enough retirement income is investing in a manner that can outpace inflation. By and large, that means loading up on stocks, which are riskier than bonds but have historically delivered stronger returns.

Most research indicates that women have a tendency to shy away from stocks, despite the growth potential that comes with them.

The average female investor keeps 68% of her portfolio in cash and cash equivalents, like money market accounts, Treasury bills, and certificates of deposit, according to BlackRock. By comparison, men keep 59% of their portfolios in cash. And only 21% of women are actually willing to invest in stocks.

To some degree, a modest fear of risk is a good thing. In fact, Fidelity reports that women are more likely to have their long-term savings invested in an age-based allocation, like target-date funds, than men.

But women may be taking their trepidation to an unhealthy -- or rather, unprofitable -- extreme. Wells Fargo finds that only 4% of women take a good deal of risk in their portfolios. And 56% of millennial women say fear holds them back from investing, according to SoFi and Levo League. That's unfortunate, because millennial women have a long investment horizon and ample time to ride out the stock market's ups and downs.

Of course, in any given investment portfolio, the goal should be to balance risk with reward. A portfolio mostly concentrated in stocks could easily generate an average annual 7% return based on the stock market's historical performance.

Meanwhile, a bond-heavy portfolio might generate just half that. Assuming a monthly $500 contribution over a 30-year period, the difference between an aggressive portfolio and a conservative one amounts to upward of $250,000.

Women may lack confidence in their ability to invest, but they still tend to do it well. In fact, in 2017, Fidelity reported that women's portfolios performed better than men's by 40 basis points, or 0.4%.

That may not seem like a huge gap, but it's substantial when compounded over time.

Data from investing platform Openfolio found that this wasn't just a fluke -- female investors outperformed men in 2014, 2015, and 2016.

2015 wasn't the best year for the stock market, but women were more likely to walk away unscathed. Female investors using Openfolio lost an average of 2.5% that year, compared to a 3.8% loss for men.

Women's tendency to do better than men at investing dates all the way back to the early 1990s. A study by the University of California, Berkeley, based on 35,000 brokerage accounts over a six-year period found that women generated returns that were 1% higher, on average, than men.

Even professional female investors tend to do better than men. In fact, 43% of women-managed mutual funds outperformed their benchmark in 2020, compared to just 41% of those managed by men, according to Goldman Sachs.

Despite grappling with substantially lower paychecks on average, women tend to have higher savings rates than men.

In a 2017 Fidelity survey, women saved an average of 9% of their annual paychecks, compared to an average of 8.6% saved by men. And Vanguard reports that women at all income levels have higher retirement plan participation rates than men.

The stock market tends to be volatile, and that can drive investors to act impulsively and lose money in the process. But data shows that women don't tend to react to market fluctuations the same way men do.

Vanguard has also found that women trade 40% less frequently than men. And that's not just a recent trend. Between February of 1991 and January of 1997, men traded 45% more than women, according to a University of California study. All of that extra trading was said to reduce men's net returns by 2.65% a year, as opposed to 1.72% for women.

It's clear that when it comes to investing, women are doing a lot of things right. They're saving a respectable portion of their income, trading at a reasonable frequency, and choosing investments that let them outperform men. But women still have work to do, and 41% regret not investing more of their money, reports Merrill Lynch and Age Wave. As such, women should pledge to take a more proactive role in securing their futures.

First, women must recognize their longevity risk. As of 2019, the average male life expectancy at birth was age 76.3, compared to 81.2 for women. Because women tend to live longer, they need more long-term savings.

Furthermore, outliving their male counterparts puts women at an increased likelihood of needing some type of long-term care in their lifetime, the cost of which can be prohibitively expensive.

These are just some of the reasons why women need nest eggs on par with men's savings.

Women should also continue to fight for raises and equal pay. There are tools that make it easy to compare salary data based on factors like job title, experience, and geographic location. Women shouldn't hesitate to use facts and figures to back up their claims.

Of equal importance is getting into the habit of investing at a young age. A woman who starts putting $500 each month into a retirement plan at age 25 and continues doing so until age 65 will wind up contributing $240,000 out of pocket. But that sum, if invested largely in stocks, could generate an average annual 7% return. When we apply that assumption, that $240,000 grows to roughly $1.2 million.

A conservative portfolio, however, won't perform as well. A bond-heavy portfolio earning an average of 3.5% a year will result in an ending savings balance of just over $500,000, assuming that same monthly contribution and investing window.

Finally, women should make sure they understand the concept of asset allocation by age. Stocks are a wise bet when retirement is years away, but as that milestone draws closer, women should consider moving toward bonds and other safer investments.

That said, even seniors shouldn't dump their stocks entirely. At the start of retirement, it's perfectly appropriate to have around 50% of one's portfolio in stocks with an increased shift toward bonds, CDs, and the like over time.

Women have worked hard but have a long way to go

When it comes to investing, women have much to be proud of. They're saving well and staying the course in the face of market changes. But female investors still need to work on boosting their confidence and getting on board with the idea of going heavy on stocks.

If women can learn to overcome their fears, they stand to accumulate an impressive amount of wealth and give male investors a run for their money.