Presidential candidates Hillary Clinton and Donald Trump have two very different tax plans. Clinton wants to raise taxes on the rich while keeping everything the same for lower- and middle-class Americans, and Trump wants to cut taxes for everyone, including the rich. According to the recent Tax Fairness Survey by WalletHub, more than two-thirds of Americans agree on whose tax plan is better.

Americans are not happy with the current tax system

More than 75% of survey respondents said that the current tax code is either "complex" or "extremely complex," and fewer than 6% say that it's "simple" or "very simple." There are simply too many potential deductions and other complications for most Americans to keep track of. Trump's plan would arguably do the most to simplify the tax code, but there are many details we don't know, such as which deductions will stay and which will be eliminated.

One specific area where many Americans are frustrated is preferential capital-gains tax rates on investments held for over one year, which clearly favor the wealthy. An overwhelming majority of Americans, 90%, say that investment income should be taxed at least as heavily as income from wages. Clinton's plan calls for increasing short- and intermediate-term investment income taxes on the wealthiest Americans, while leaving the current capital-gains rates unchanged for most people.

Additionally, the majority of Americans say that corporations should have to pay higher tax rates than consumers, not lower rates as Donald Trump is proposing. In fact, just over 6% of survey respondents said that consumer tax rates should be the higher of the two.

In a nutshell, Americans want a fair tax system. In fact, the survey found that tax fairness was more important to more Americans than "tax equality" and "doing what's best for the economy" combined. 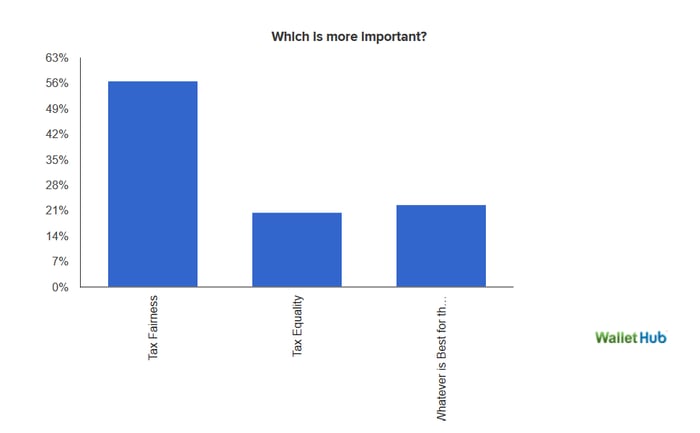 The candidates' tax plans, in a nutshell

Donald Trump's tax plan essentially calls for cutting taxes on corporations and most Americans. He wants to consolidate the seven tax brackets we have now into just three, with rates of 12%, 25%, and 33%, and wants to repeal the 3.8% Obamacare tax on certain investment income as well as the alternative minimum tax.

In addition, Trump wants to more than double the standard deduction, repeal the estate tax, and offer better tax breaks for child care. For corporations, Trump wants to dramatically reduce the business tax rate from a maximum of 35% to just 15%, and wants to provide incentives for U.S. corporations to repatriate foreign profits.

On the other side, Hillary Clinton's plan is focused on increasing taxes on the rich. Clinton is a strong proponent of the "Buffett rule," which would ensure that nobody who makes more than $1 million per year pays an effective tax rate of less than 30%. Clinton plans to charge an additional 4% tax on the wealthiest Americans, and wants to raise the top estate-tax rate to 65% on billionaires.

In addition, Clinton wants to close tax loopholes, and instead of lowering the corporate tax rate, she wants to make it financially difficult for U.S. corporations to move jobs overseas. However, Clinton has pledged to simplify and reduce taxes on small businesses.

More than two-thirds of Americans side with Clinton

Since Hillary Clinton's tax plan does more to address the perceived tax unfairness of the current system, particularly when it comes to taxing the wealthy, it should be no surprise that more Americans prefer her plan. In fact, when both tax plans were presented to the survey participants without the candidates' names attached to them, Clinton's plan was favored by just over 70%.

An even larger majority of 71.5% said that Clinton's corporate tax plan to leave the rate at 35% is preferable to Trump's plan to cut the rate to 15%. And 72.5% preferred Clinton's plan to tax the wealthy.

To be perfectly clear, I'm not saying that one candidate's plan is better than the other, just that the majority of the American people feel this way.

Additionally, it's worth noting that many experts disagree with the American public on certain tax issues. For example, James Maule, professor of law at Villanova University, says that sales tax is the least fair form of taxation because of its regressive nature, while the majority of Americans say the opposite.

It's also important to point out that taxes are just one piece of the puzzle, and should be considered along with the candidates' plans for foreign policy, immigration, Social Security, Medicare, and all the other issues.

Having said that, speaking from a tax perspective, Hillary Clinton's plan seems to more closely align with the American public's idea of a fair tax system. Whose plan do you prefer?