Baby boomers are turning 65 at a pace of roughly 10,000 per day, and if you're a baby boomer who is fast approaching retirement, you might be wondering if you're on target with your retirement savings goals.

While every baby boomer's situation is different, understanding how much your peers have set aside for their golden years can help shape your savings plans. Are you on track for financial security in retirement? 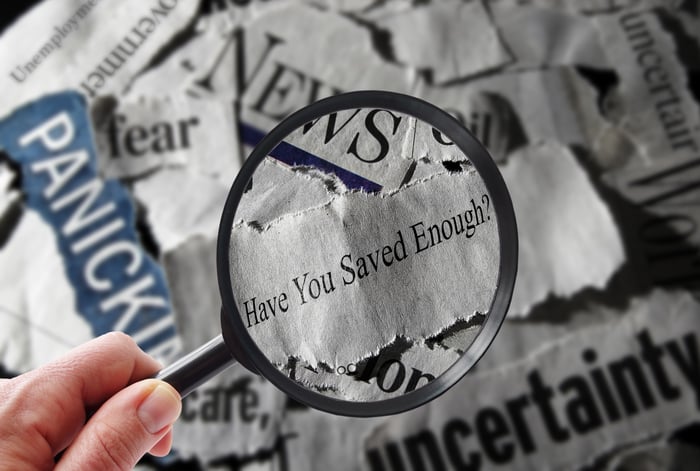 According to a recent PWC survey, baby boomer retirement savings vary widely, but roughly half of all baby boomers have set aside only $100,000 or less. More worrisome, over a third of baby boomers have saved less than $50,000 for retirement, and just 15% have accumulated nest eggs north of $500,000, an amount that could generate the kind of retirement income necessary to maintain a retiree's standard of living.

Those figures suggest that a significant proportion of baby boomers could end up struggling to pay their bills once they retire. Financial planners recommend withdrawing no more than 4% of retirement savings per year for expenses, and at that rate, the baby boomers with accounts smaller than $100,000 will produce less than $4,000 in retirement income annually.

If they withdraw more than 4%, they run a greater risk of outliving their money, yet, it seems very likely that's what many baby boomers will be forced to do. According to the Bureau of Labor Statistics, the average age-65 or older household spent $44,664 last year.

Social Security can bridge some of the gap between income and spending, but Social Security is designed to be a safety net, not the primary source of retiree income.

Clearly, Social Security will help, but it could still fall short for many, especially since, according to the Social Security Administration, 43% of singles and 21% of married couples count on Social Security for 90% or more of their day-to-day living expenses.

Change you can make now

If you're behind your peers in saving for retirement, even small changes now can have a big, positive impact on your future financial security.

The most retirement-friendly change you can make right now is to amp up your savings in tax-advantaged retirement accounts, including employer-sponsored plans, such as 401(k) and 403(b) plans. Many baby boomers participate in these plans, but they don't contribute to them as much as they could, or should. Also, a significant percentage of people are offered these plans, but don't participate in them.

According to a Transamerica survey released this month, the average contribution rate to employer-sponsored retirement plans is 8%, and 23% of workers who are offered plans don't enroll in them.

In 2017, participants in these plans can contribute up to $18,000 plus an additional $6,000 if they're over 50. It's likely that most baby boomers aren't contributing at those levels and therefore many would-be retirees could benefit from increasing their contribution rate to 10% or higher. Even increasing your contribution rate by a little can pay off due to compound interest, so schedule time with your manager now to discuss an increase.