How much money does the average American make?

The short answer is that the overall average American household income is $65,751, per the latest IRS data. However, keep in mind that the latest IRS data is from 2014, the most recent year for which all tax returns have been finalized and processed.

Well, U.S. median wage growth in 2015 and 2016 was about 3% and 4%, respectively, so using these percentages, it's a fair estimate that the average household income in 2016 is about $70,400. Of course, we'll have to wait until the IRS releases its statistics of income for the 2016 tax year, but this should prove to be pretty accurate.

How does your debt compare with the average?

Now that we've seen the average American household's income, let's take a look at its debt.

According to NerdWallet's 2016 American Household Credit Card Debt Study, the average household with debt owes a total of $132,529, which includes all credit card, mortgage, auto loan, student loan, and other types of debt. Breaking the numbers down into categories, here's what the average American with each type of debt owes.

There were some other interesting findings in the study as well. For one thing, it seems like Americans are becoming more confident in their ability to handle debt. Total U.S. debt is expected to surpass the amount owed at the beginning of the great recession by the end of 2016.

Another thing is the amount of interest we pay, particularly on credit cards. The average household with credit card debt pays nearly $1,300 in interest per year. And while this sounds high enough, consider that we're living in one of the lowest-interest periods in history. This is sure to rise if the Federal Reserve sticks to its plan of multiple interest rate hikes in the coming years.

How much does the average American save for retirement?

As I wrote in an October article, the average American with a 401(k) has $96,288 saved in their account. However, this number all by itself isn't too useful. Specifically, a "healthy" 401(k) balance varies widely depending on the account holder's age. Fifty-thousand dollars in a 401(k) could be excellent for a 30-year-old but not so great for someone turning 55. With that in mind, here are the averages, broken down by age group, according to Vanguard's 2016 How America Saves report:

One concerning observation we can make from this chart. Notice how for every age group, the median is significantly less than the average. I'll spare you a lecture on mathematics, but when this happens, it implies that most people have a balance that's below average and that a smaller portion of big savers are keeping the averages high.

Even with the averages, we're not doing a great job of saving. Using the (admittedly not perfect) 4% rule of retirement, this chart shows that the average 65-year-old can expect to withdraw just over $8,000 from their 401(k) each year if they want their money to last throughout their retirement. Could you live on just $8,000 per year on top of your Social Security benefits?

We're not doing a great job of saving money

First, the good news. The average personal savings rate in the United States as of Oct. 2016 is 6%, which includes retirement savings as well as savings for an emergency fund or other rainy-day savings. This is dramatically improved from before the financial crisis, when the personal savings rate hit a low of 1.9% in 2005. 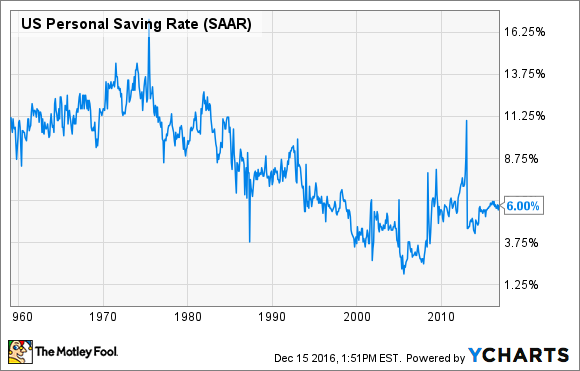 The bad news is that 6% is nowhere near enough, even if you already have an adequate emergency fund in place. And most Americans don't -- nearly half of American adults couldn't cover a $400 expense without borrowing the money or selling something.

Our current savings rate is simply far too low to prepare for retirement and unexpected expenses on the way. Most experts recommend saving at least 10% to 15% of your income (not including any contributions your employer makes to your retirement account) in order to be sufficiently prepared.

What if your debt is too high or your savings is too low?

With 2016 ending, now is an excellent time to think about your financial New Year's resolutions. If your debt is too high, decide to get it under control. Here's some advice that can help you do it. The same goes for increasing your savings rate or building up an emergency fund. You might be surprised at how much progress you can make in a short amount of time.