Confused about 1099s? Here's a guide to the most commonly issued forms.

If you're new to filing taxes, you may have been told to look out for 1099 forms. Not sure what a 1099 is? A 1099 is a form that's used to list the various types of income you receive throughout the year outside of your regular salary. It's important to report this outside income to the IRS, because if you don't, you could easily land on its audit list.

If you work for a company as a salaried employee, you'll receive a W-2 summarizing your earnings for the year. A 1099 is similar in that it reports the income you receive, only instead of listing your regular wages, it will list payments such as interest from your bank, dividends from investments, or compensation for freelance work. 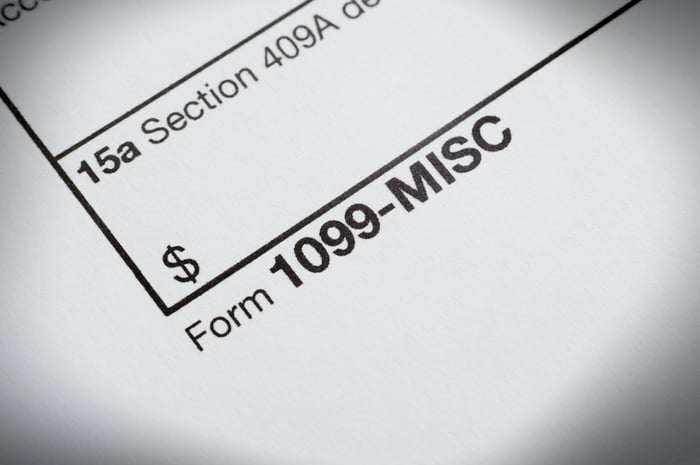 Generally, 1099 forms are supposed to be made available to tax filers by January 31. Some issuers send out 1099s by mail, while others provide them electronically. The key thing to know about 1099s is that any time you receive a form, the IRS also gets a copy, and if you fail to report the income listed on a 1099, your return could get flagged for an audit.

There are a variety of 1099s you might receive, and it's common for tax filers to get more than one. Six of the most frequently issued 1099 types include the following:

1. 1099-MISC: This form is used to report miscellaneous income you've received, typically as a result of freelance or self-employment work. Companies are required to issue a 1099-MISC if they pay you $600 or more over a given tax year. Keep in mind, however, that if you make less than $600 from a single company and don't get a 1099, you're still required to report those earnings on your taxes.

2. 1099-INT: This form is used to report interest income you receive, such as that from a savings account at a bank. You should know that interest is taxed as ordinary income, which means you'll pay the same rate on your interest as you will on your regular paycheck.

3. 1099-DIV: This form is used to report dividends and distributions from investments. If you hold stocks that pay dividends, your income for the year will be summarized on this form. Because dividends can be taxed differently, this form typically differentiates those payments that are qualified to be taxed at a more favorable rate.

4. 1099-C: This form is used to report the cancellation of debt. Sometimes, lenders will agree to forgive a portion of what you owe them. What many borrowers don't realize, however, is that canceled debt is considered income, and you're therefore required to pay taxes on it.

5. 1099-R: This form lists distributions from retirement accounts such as IRAs, 401(k)s, pensions, and annuities. You should receive a 1099-R if you're paid $10 or more from a given plan or account. You'll also be issued a 1099-R if you roll a retirement plan into another tax-advantaged account (such as rolling a 401(k) into an IRA). Unless you have a Roth IRA, you're required to pay taxes on your retirement plan distributions, and those withdrawals are treated as ordinary income. Some people, however, opt to have taxes withheld from their payments up front as opposed to paying the IRS its share at tax time. If you've gone this route, then you'll need to attach your 1099-R to your tax return so that the IRS sees that you've already paid your share.

6. 1099-S: This form lists proceeds from real estate transactions, such as the sale of a house. When you sell your property, you're allowed to exclude up to $250,000 in gains as a single tax filer, and up to $500,000 in gains as a joint filer, provided you meet certain criteria. This form will tell you what real estate income you're required to report to the IRS and pay taxes on.

Though there are other types of 1099 forms in addition to those listed above, these are the ones you're most likely to encounter. You should also know that it's not unheard of for a 1099 to be issued incorrectly. If this happens to you, and you don't take steps to resolve the issue, you could run into trouble come tax time -- especially if you have a 1099 showing an amount that's higher than what you were actually paid.

Furthermore, you might run into a situation where you're missing a 1099 you were expecting to receive. As long as you have a record of your payments and know what to report, you generally don't need to include the actual document with your tax return. That said, it pays to contact the issuer to request a copy of your form to ensure that you're reporting what the IRS is seeing.

Remember, 1099s aren't just there to help you file your taxes -- they're a means of reporting income to the IRS. And if your numbers don't match what the IRS has on file, you could wind up on that dreaded audit list.