Please ensure Javascript is enabled for purposes of website accessibility
Log In Help Join The Motley Fool
Free Article Join Over 1 Million Premium Members And Get More In-Depth Stock Guidance and Research
By Maurie Backman - Mar 26, 2017 at 6:18AM

Most Americans make one major tax mistake. Will you fall into the same trap?

If there's a silver lining to tax season, it's the notion of getting a juicy refund and enjoying that glorious newfound cash. In fact, in a recent TaxAct survey, 61% of filers said they'd rather receive a bigger refund check than bigger paychecks throughout the year.

Parents are even more likely to prefer refunds to extra cash all along. Of those surveyed, 70% of households with children under 13 felt that getting a larger refund would be preferable to larger paychecks. But while the idea of getting money back on your taxes might seem like a good reason to celebrate, it should actually serve as a wake-up call that you've been making a major mistake all along. 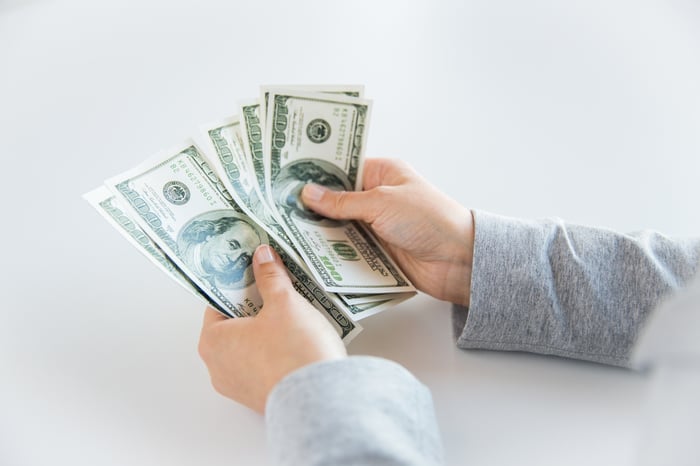 It's not free money; it's your money

A big reason so many taxpayers welcome the idea of a refund is that they regard that cash as a bonus of sorts. And who wouldn't want a free gift from the IRS?

But when you get a refund, you're not getting free money from the government at all. Rather, you're getting your money -- the money that should've been added bit by bit to each paycheck you collected throughout the year. In fact, when we talk about tax refunds, the only one who's actually getting anything for free is the government. Overpaying your taxes during the year is like giving the government an interest-free loan, and, if you're like the typical American, probably not a small one.

As my colleague Matthew Frankel recently reported, last year, the average American received a $2,860 refund for the previous tax year. All told, more than 70% of returns resulted in refunds, and the IRS gave back over $317 billion to taxpayers.

Let's say you received a $2,860 refund last year, or are set to collect a similar one this year. What this means is that you pretty much voluntarily lowered your paychecks by $238 each month. Now if you're a high-earning household with ample savings and no cash flow challenges, then the idea of shorting yourself $238 a month isn't particularly appalling. The problem, however, is that many taxpayers who lose out on that kind of money up front aren't financially secure.

A recent GoBankingRates study confirmed that 69% of Americans have less than $1,000 in the bank, with 34% having no savings at all. For a household living paycheck-to-paycheck, losing out on $238 a month could spell the difference between paying the bills on time or racking up high-interest debt and damaging some credit scores in the process.

What's even more disturbing is that taxpayers who earn the least are also the most likely to receive refunds. According to IRS data from 2012, 84% of tax filers who earned less than $25,000 a year got a refund, compared to 34% of higher earners making more than $200,000. While overpaying taxes during the year isn't ideal for anyone, it can be especially detrimental for workers who need access to that cash sooner.

Keep your money all along

If you're ready to break the cycle of slashing your paychecks throughout the year and lending money to the IRS instead, there may be a simple fix in the form of adjusting your withholdings on your W-4. Employers typically allow workers to make changes to their W-4s at any time, and you should absolutely update yours once you add a child to your household.

Of course, a big reason why so many workers overpay their taxes is that they're afraid of owing money to the IRS down the line. Given the number of people without savings, it's a valid concern. If owing taxes is something you're worried about, adjust your withholdings in your favor -- but rather than spend the extra money you get in each paycheck, stick it in a savings account. In a best-case scenario, you'll have a lump sum of cash to keep if your return doesn't result in an IRS debt. And in a worst-case scenario, you'll have money available to pay your tax bill if it turns out you do owe something.

Meanwhile, you'll be the one earning interest on that money instead of letting the government capitalize on that portion of your earnings. And just as important, you'll have more cash on hand in case an emergency strikes during the year.

While scoring a refund may seem like a good thing, that couldn't be further from the truth. Remember, a tax refund isn't extra money; it's delayed compensation. And frankly, you deserve better.