Last year, we got some pretty bad news on the savings front: The number of Americans with less than $1,000 in the bank had climbed all the way up to 69%. Worse yet, 34% of U.S. adults admitted to having nothing in a savings account whatsoever.

That's why the latest report from GOBankingRates, which conducts this survey year after year, is somewhat encouraging. The 2017 study reveals that 57% of Americans have less than $1,000 in savings, a 12% decrease from the previous year, and a 5% decrease from 2015. 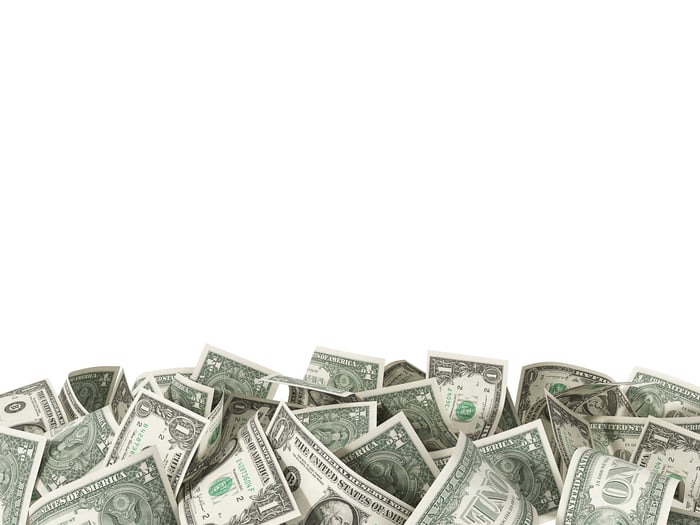 On one hand, that's definitely something to celebrate -- especially since the study also reveals that 25% of Americans now have at least $10,000 in savings. On the other hand, a growing number of Americans have absolutely no money in the bank: 39% have $0 saved.

But let's revisit that first statistic. Yes, it's a good thing that the number of Americans with less than $1,000 in savings has decreased. But we're still talking about more than half the U.S. population having less than $1,000 on hand in immediately accessible cash. And that's a problem, because if any of the folks who fall into that category get hit with a major financial emergency, they're going to be out of luck.

Younger Americans are struggling to save

It's hardly surprising to learn that workers aged 18 to 24 are more likely to have minimal savings than those who are older. After all, they've spent less time in the workforce. But folks in their 30s, 40s, and 50s aren't doing much better. Here's a breakdown of how various age groups are managing to save (or not):

While having some amount of savings is better than having none at all, the fact of the matter is that anyone with less than $1,000 in the bank is in pretty bad financial shape. That's because all working Americans, regardless of income level, should have enough emergency savings to cover at least three months' worth of living expenses. And that's really the minimum. A much safer bet is to amass enough cash to pay for a full six months of expenses. That's the best way to protect yourself in the event you fall ill, lose your job, or encounter a tremendous bill that's wholly unexpected.

In fact, even a number as seemingly impressive as $10,000 isn't enough to enable many adults to pay three months' worth of bills. If your emergency fund needs a serious boost, it's time to focus on building it while you can -- before a true financial catastrophe strikes.

Making up for missing savings

Now that you've come to the realization that your savings are nowhere near adequate, let's work on padding that bank account. You can do this in one of two ways (or both, if you're that ambitious). The first is to trim your current expenses, and stick whatever money you save directly into the bank.

To what extend should you start cutting back? It depends on how much you're spending and how far behind you are in the savings game, but if your bank account balance is $0, you may want to get a bit extreme. That could mean downsizing your living space, giving up a car, or eliminating all leisure and restaurant meals until you're reasonably caught up. If you have some savings, but not a ton, you might get away with less extreme measures, like slashing your cable package, cutting back on leisure and restaurants (as opposed to cutting these things out completely), or canceling a rarely used gym membership.

Your second option for building your savings comes in the form of working a second job to generate extra cash. An estimated 44 million Americans currently hold down some sort of side gig, and of those who do, 36% manage to bring home $500 or more per month. If you have less than $1,000 to your name but are willing to take on a side hustle for a year, you could add $6,000 to your bank account in 12 months' time.

No matter what steps you take to build your savings, the key is to make them a priority. Otherwise, there's a good chance that come this time next year, you'll find yourself in the same precarious position you're currently in.

Americans Are Doing a Better Job of Saving, but Most Are Still Falling Short @themotleyfool #stocks Next Article
Current